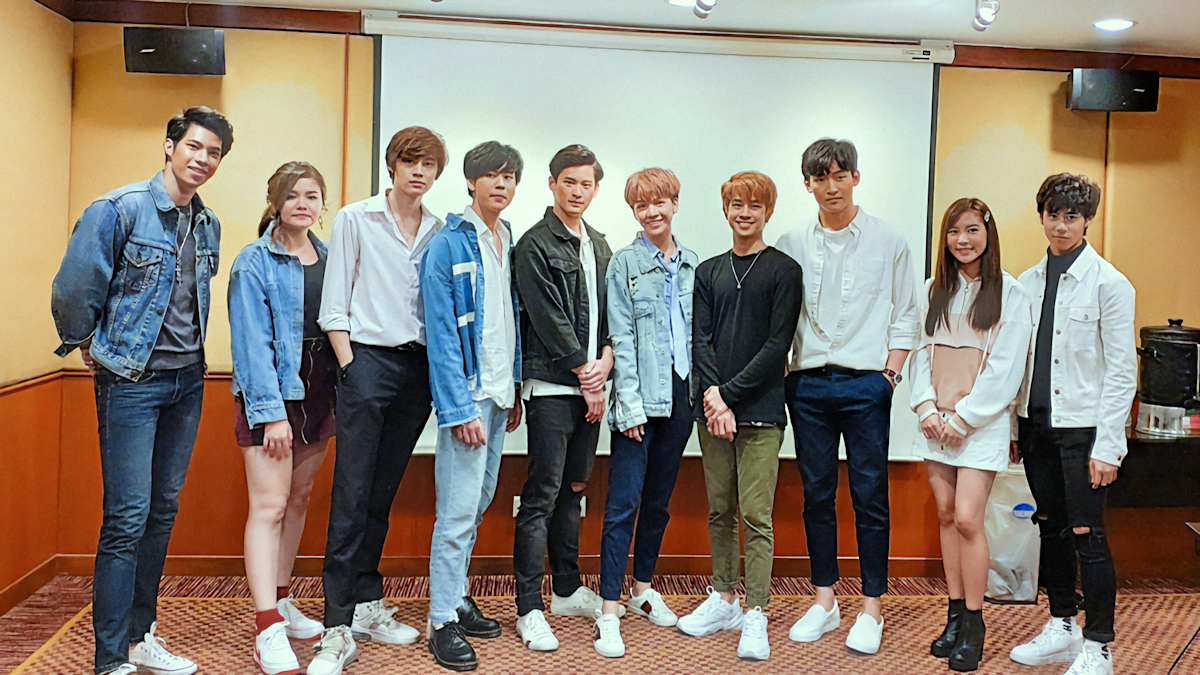 Until We Meet Again: Until You – Fan Meeting

October 25th, 2020, was an exciting day for the fans of Until We Meet Again the Series, as the cast reunited for a one-night-only fan meeting in Union Hall 2, Bangkok, Thailand. The venue was packed with a thousand eager fans and tens of thousands of international fans who watched through paid Livestream on VLIVE+. It was confirmed that this would be the final fan meeting for the stars to be all together in Thailand, so it was no surprise that the show went all-out for the ultimate UWMA fan experience.

Hours before, the cast was eager to greet fans with a group photo, hi-touch event, and soundcheck event, which were benefits for certain ticket tiers.

Despite a slight technical delay, it started with a spectacular on-stage re-enactment of UWMA’s most iconic scenes. Water rained down on Kao Noppakao and Earth Katsamonnat as they reprised their roles as Korn and Intouch, respectively.

Fluke Natouch and Ohm Thitiwat also treated fans to a live performance of some scenes as Pharm and Dean, showcasing the electric chemistry that has made them famous the world over.

Broccolis, the unofficial fandom name for Boun Noppanut and Prem Warut, were treated to a shout-out from the pair as they re-enacted their mistletoe scene from the series. The two also sang Boun’s featured song in the series’ OST, “Or We Have Met.”

Also present were Boy Sompob, Dome Jaruwat, and Dew Arunpong, who serenaded the audience with the songs we have all come to love from UWMA. The three-hour event was kept lively and exciting in part by the talents of veteran MC Samon Spai Sukdiwong, who has been hosting their activities since the beginning.

Multiple group performances followed, as well as solo stages from series leads Fluke Natouch and Ohm Thitiwat. Exciting couple numbers, as well as other performances, highlighted the actors’ other talents. The show was filled with colorful costumes, laser lights, and fire effects and was helmed by none other than UWMA series Director and Studio Wabi Sabi CEO, New Siwaj Sawatmaneekul.

In their closing statements, the cast took the opportunity to thank everyone who has made their journey possible and comforted fans that would miss them after this event.

Fluke Natouch – “… Thank you, everyone, for your encouragement and support from the first day until today. I didn’t think before that I could be standing here. I used to feel that I didn’t suit [sic] here. Sometimes, I get discouraged, but every time I read a comment, every word that everyone told me is an encouragement that makes me fight with everything.”

Ohm Thitiwat – “Thank you very much. Thank you to everyone who supported me and the other fellow co-actors all the way, always. To be honest, I’m really someone who speaks so little, smile less, but at times, I feel like I should speak it out.”

Earth Katsamonnat – “… I just want you to know that I love all of you and definitely see (collect) all of your love. Lastly, I’m leaving this small kid from Chiangmai to you guys to care (for him) and (give him) all your love. Thank you… I love you…”

Kao Noppakao – “… Starting for today, our opportunity to meet each other once again may be a little hard, but I believe if we keep our close relationship like this, we will meet again. Also, I believe all the people & fan clubs will support us, always. And if you guys miss us, I believe the Red Thread family will be able to come back together once again.”

Prem Warut – “… Thank you, Mom, for giving me an opportunity to do anything I want. Mom, look closely, the number of people, the number of fans here to see me. You told me, you know that I can do it, Mom.”

Boun Noppanut – “I want to say this to my fans and family members: I know we have a few moments together, we’ve done a few things together. And I wonder if I’ve done enough (with them). Honestly, when I have free time, we would help each other, something like that. I feel like my Red Thread family is here, and there are some at home cheering for us. Thank you very much.”

The show ended with the cast’s rendition of Boy Sompob’s “Luckiest Boy,” a song that has become very special to all the series’s fans.

All in all, the night was a resounding success, with the stars and fans alike gushing on social media about how well the evening went.

Fans have one final chance to see them all live in Manila, Philippines, for the “Let’s Meet Again” fan meeting on May 30th, 2021. There is also a rumored fan meeting in Japan, but details for the same have yet to be announced.