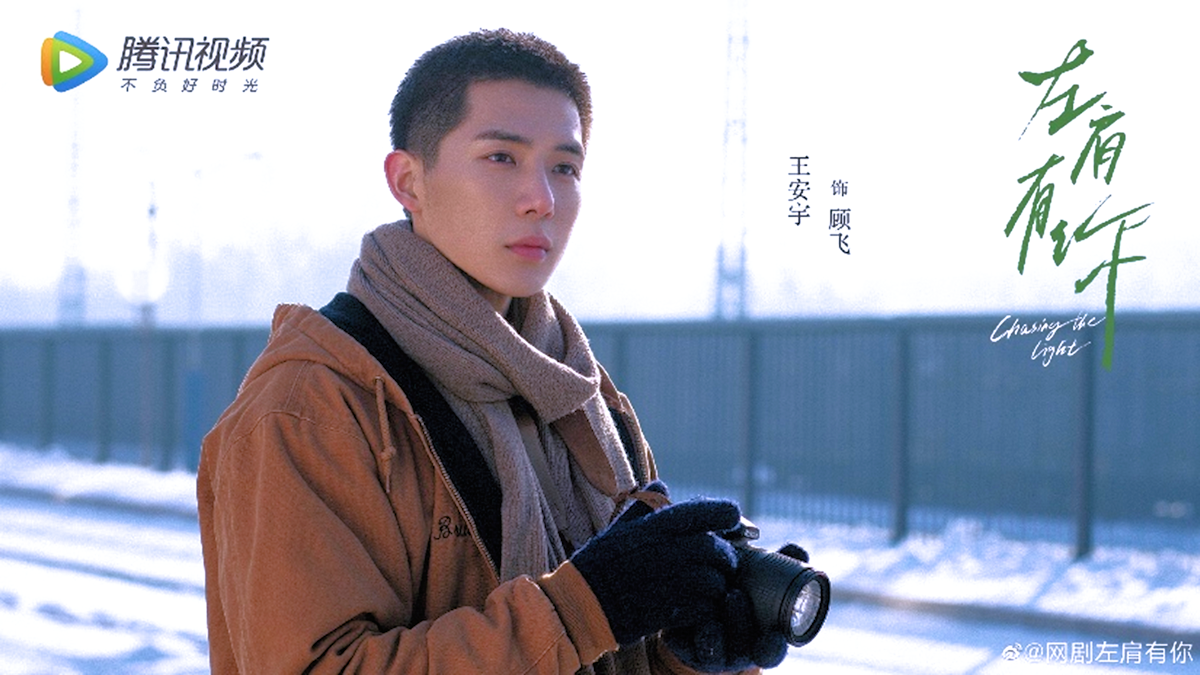 Chinese BL industry is undergoing a sudden change with the steep rise of “Bromance” dramas. Numerous production houses are churning out adaptations of “gay novels” under the pretext of subtle romance, seemingly in an attempt to mock the Chinese Government’s cowardly censorship. Although the daring portrayal of a gay relationship as in “Addicted Heroin” hasn’t been repeated, popular streaming portals produce shows with an indirect portrayal of gay context. I’m astounded with the audacity and also mildly amused with the success in bypassing the censorship. In the upcoming year, the watching sites may be flooded with daring Chinese BL, which could prompt brute censorship from the Govt. Let’s hope not. Psychomilk is here to keep you updated with the latest happenings in the Chinese BL Industry. Let’s dig deeper and find some new shows that will set the global platform ablaze.

The widely popular web portal IQIYI is certainly leaving no stone unturned when it comes to streaming bold content. Its latest sports-based offering, “Hikaru No Go,” has won admiration from all over the world and is making its presence known across borders. IQIYI’s next offering, “Ping Pong Life,” is already high on the list of anticipated dramas. Ping Pong Life marks the return of “Addicted Heroin” star Timmy Xu to the world of BL, and the stakes are thought to be quite high for this one.
The storyline is based on the endless competitions that take place on the ping pong tables with two young men at the center. Xu Tan (Bai Jing Ting) is physically weak but strongly passionate, and Yu Kenan (Timmy Xu) is talented but unruly outside the court. Despite their opposite personalities, Xu Tan and Yu Kenan mirror the same journey in their sports careers and witness a pivotal time in Chinese ping pong history. Xu Tan is a player who undergoes a major transformation. Under his grandfather’s influence, he starts playing the sport to improve his health and gets noticed for his abilities. Yu Kenan is already the star player from a famous family who realizes that there are many things he has yet to learn.

For their dreams and the sake of their country, they stand at two ends during the biggest competition of their lives. I’m not yet sure if the show will be tagged as “Bromance” and portray a deep friendship between the two main leads, or there will be another subtle attempt at romance (similar to Hikaru Na Go and Winter Begonia). However, I’m surely excited to watch this sports-based drama, simply because it stars Timmy Xu in a pivotal role and also since I have high expectations with shows that premiere on IQIYI. Ping Pong Life will start streaming on IQIYI from December 31st, 2020. A perfect way to say goodbye to this morbid year.

“Chasing the Light” one of the most anticipated adaptations (and will probably be censored) in the upcoming year. Tencent Penguin Pictures, and Mantra Pictures will produce this live-action drama adapted from the BL Novel SaYe 撒野 written by Wu Zhe 巫哲. The show stars Fan Chengcheng as the main lead Jiang Cheng, Wang Anyu as Gu Fei, and child actress Angela Wang Shengdi playing Gu Miao, Gu Fei’s younger sister.
The novel follows the journey of Jiang Cheng, a top student who has been ‘exiled’ by his adoptive family to a small industrial town where his biological father works at a steel mill. The sudden change in his societal conditions sends him into depression. By chance, he meets the steel mill’s bully Gu Fei, thus heralding a love story about salvation and redemption. The drama has already begun shooting, and Social Media are already ablaze with photographs of the main leads. The drama is rumored to air in 2021 on WeTV platforms. The sexual relationship between the textbook characters will again be changed to suit the cowardly censorship. For now, enjoy some interesting photographs from the location, which showcase the main leads’ vibrant chemistry.

A League of Nobleman 张公案

Tencent Video is certainly taking the Chinese BL industry by storm. Riding high on the success of “The Untamed” and with the anticipation surrounding its upcoming dramas “Immortality” as well as “Winner is King,” the production house is now adapting popular BL Novel “Zhang Gong An” or “The Society of Four Leaves.” Titled as “A League of Nobleman,” the show is a historical crime mystery with Song Weilong been cast to play the scholarly Zhang Ping while Jing Boran will portray the minister of rituals Lan Jue.

Zhang Ping is a poor scholar who wanders on the streets while using his skills pulling noodles to make a living. Despite being unremarkable in looks, he has a meddlesome nature and likes to involve himself in the Government’s cases. Using his sharp observational skills and out of the box thinking, he can grasp each case’s unique points. However, due to his solitary nature, he isn’t well-liked by others. Lan Jue, the Minister of Rites, is constantly embroiled in the political strife of the court. Possessing a delicate but elegant appearance, he appears to lead a smooth-sailing life but actually hides a growth history [sic] unknown to many. One day as Zhang Ping travels to the capital to take the National Examinations; he accidentally gets embroiled in Lan Jue’s secret operation.

Using his genius reasoning, he manages to solve the case and disrupts Lan Jue’s plan while also discovering Lan Jue’s secret and saving his life. From then on, the two people with a disparity in status and contradictory ideals became close friends, facing tough cases straight on and going through life and death situations together. Under Lan Jue’s recommendation, Zhang Ping slowly transforms from a poor scholar to a minister in the Dali Temple, solving cases and handling affairs in the court, making a name for himself as a genius detective.

The show will probably air in the second half of 2021 and is supposed to have 24 episodes. I’m surely looking forward to this historic venture.

MGTV Drama, which is widely popular for its straight romances and thriller-genre dramas, is venturing into BL. The production house is adapting popular mystery suspense thriller BL novel “Walking in the Dark” by Jin Shi Si Chai. Titled as “In Darkness,” posters of leads Peng Guanying and Zhang Yujian were released as the production team held their filming ceremony. The drama is based on the lives of narcotics officers, focused on human psychology & societal issues.

Xie Gang Shan (Peng Guan Ying) is an undercover cop who has successfully infiltrated into a very large drug-trade organization. However, at the most important juncture of his mission, he dies of an accident. Not wanting the fruits of his labor to be wasted, Sui Gong (Captain of the Drug Trade Police Force) uses new technology and implants Xie Gang Shan’s memories into a death-row criminal that looks exactly like him. “Xie Gang Shan” is thus revived and returns to the police force. However, after an incident where he accidentally shoots a violent criminal, memories belonging to the death row criminal slowly return to him. The criminal’s identity turns out to be none other than the son of Mu Kun, the drug organization’s leader.

Dealing with his conflicting identity and memories, Xie Gang Shan thus begins to investigate the truth of his father’s death. He uses the mentality and thought process of a perverted murderer to approach this case while dealing with his own personality changes. Simultaneously, mysterious caricature [sic] expert Shen Liu Fei (Zhang Yu Jian) appears by his side. Unsure of whether he is a friend or foe, Shen Liu Fei appears to be helping him crack the case, although at the same time hides his own motives. Slowly realizing he is a replacement, Jing Gang Shan undergoes betrayal by his family, misunderstandings by his comrades, and slowly his heart becomes twisted. However, as he gradually gets familiar with human beings’ nature, his faith toward “kindness” is reignited. The drama is currently filming, and MGTV recently released some stills from the shooting location. The show will start airing in 2021, most probably on MGTV’s YouTube Channel, and with 24 episodes.

Priest is currently one of the most successful Chinese BL Authors nowadays. Priest’s latest BL novel, “Mo Du 默读 (SilentReading), ” is being adapted into a live-action drama. Titled “Light The Darkness,” the drama is co-produced By Youku and New Style Media (The Untamed). Filming begins in February 2021, and the rumored cast includes Wang Long Zheng, who will probably portray the character role of Luo Wenzhou, with Liu Xue Yi playing the role of Fei Du. The storyline is centered on the adventures of the policeman named Luo Wen Zhou and a second-generation heir named Fei Du, who work together to crack down on a crime organization called “The Reader.”

Keep watching this space for more updates as we bring you more information about upcoming dramas in the third installment.