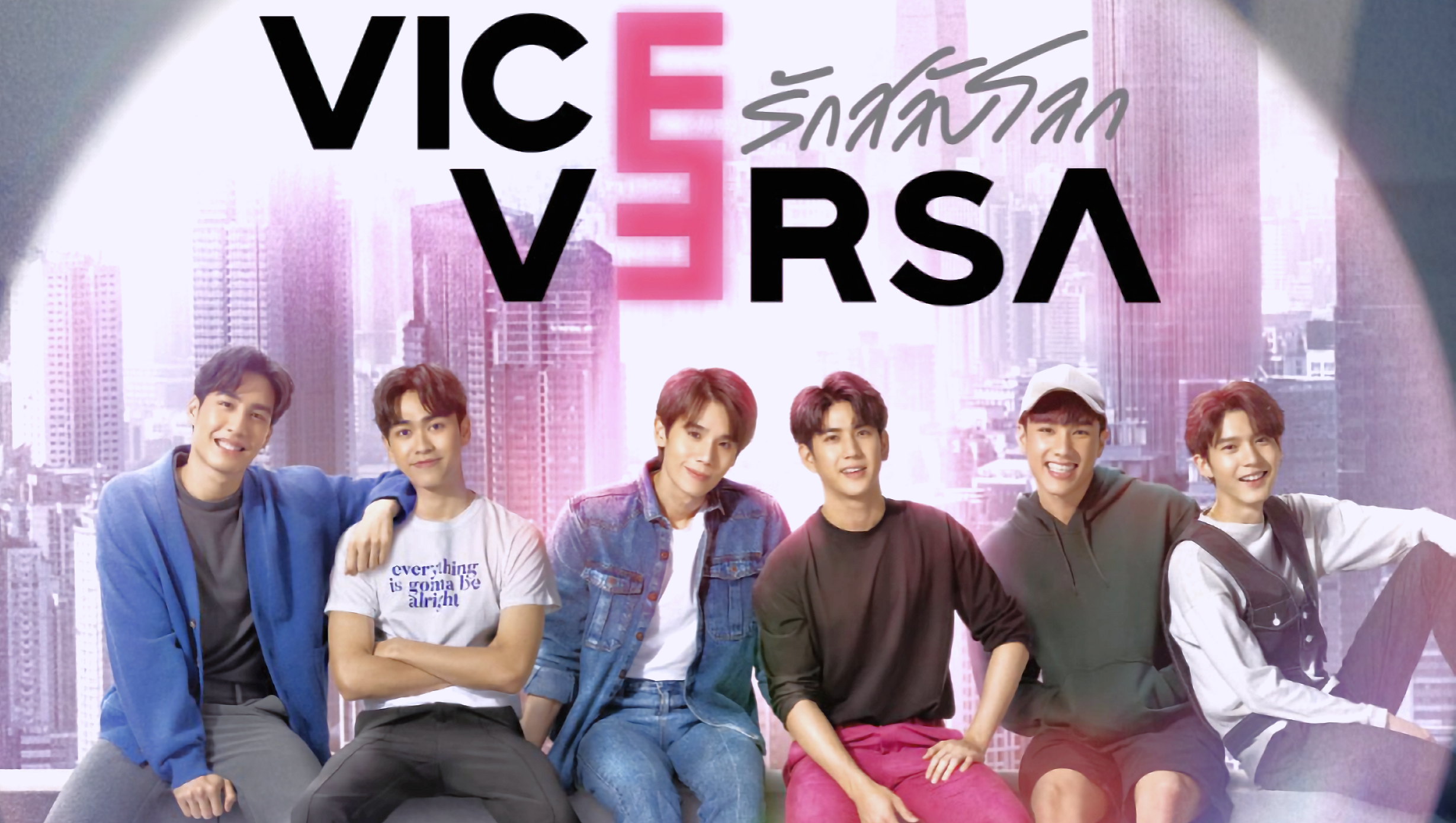 This Thai BL drama will make you smile.

Here’s a synopsis from MyDramaList:

Talay wakes up in the body of a man named Tess and reencounters Puen, a famous actor now in Tun’s body, following an accident. The two have Phuwadol, a nurse who helps people from the same universe they left behind to guide them through life in this new universe. According to Phuwadol, there’s a chance they may be one another’s “portkey,” people who can help them return to where they came from once they have completed what they need to achieve.
Tun and Talay have a mission to fulfill, and they are assisted by their pals, Kita, Fuse, and Friend Credit members Up and You. Love and friendship grow with them in the new universe. What will happen with their mission? Will they be able to get back to their home universe?

I know I’m listing many characters, but I feel they each have an essential part to play in the story. There are Talay’s friends in the beginning before crossing over; then there are Tess’s and Tun’s friends.

This show is not your standard body-switching trope. It’s much more involved than that. These people swap universes and end up in different bodies. The universes are slightly similar, but everything is somewhat off-color or wrong. But for me, it’s the characters that I fell for, not just the alternate setting.

We meet Talay, an aspiring media colorist (a professional who follows the director’s instructions in changing the overall color tone in a media presentation, usually to set a style or mood. Also referred to as color-grading) in the Thai entertainment industry. Talay works very hard, but he has no social filters in his personality, which leads to some terrible first impressions for potential employers. However, he does have a close group of friends who are also in the industry. His close girlfriend leads him to a chance encounter with her idol, Puen. At first, Talay and Puen seem to be in two entirely different worlds, one in front and one behind the camera. However, you can see that Puen is kind and gentle, and Talay is just a little charmed.

When the universe swap happens, I love seeing Talay learn about who Tess is and slowly begin to change his life for the better. Phuwadol recognizes Tess as someone from a different universe because she is also transplanted from the other universe’s world. She was a male nurse in Talay’s universe but ended up in a female body. I’m honestly not sure what I think of the trope since it doesn’t seem to imply she’s a trans man in Tess’ universe, but it’s clear she is more of a tomboy who likes women.

As an aside, the actress playing Phuwadol is an open lesbian in the entertainment industry, a former Miss Thailand 2006, an ER doctor, and a YouTuber; Lalana Kongtoranin wears many hats and is completely open to talking about her life experiences. In this series, she makes it a point to tell Talay that same same-sex couples can marry in this alternate universe. She’s sad that it still isn’t allowed in their own universe (ours). The showrunners weave that tidbit into the narrative very smoothly. It’s nice to bring social issues into focus through the lens of what is possible in other places. Recently, GMMtv has done something same-sex-positive like this in nearly all their BL programming.

I adore the acting of both Jimmy and Sea. They are very cute together as Talay and Puen and then interacting as Tess and Tun.  They do a great job of expressing what it must feel like to be in a new world and a new body. The sense of strangeness and a sense of how to adapt to fit into the new life in which they have landed are captured in not only words but gestures.

The friends help, and with the two groups of friends, Talay and Puen carve a new life for themselves while waiting to return. This really plays into the Buddhist philosophy that you are only guaranteed the moment you are in, so make the most of it.

I also enjoyed the cameos of our lovely Bad Buddy cast. We had Tess and Tun, who are played by Ohm Pawat and Nanon Korapat. We fell for them in Bad Buddy, but they played friends with a history in this series. We didn’t see much of them, but it’s enough to make me smile. Also, we got to see as guest-stars another pair from Bad Buddy, Love Pattranite (Pa), and Milk Pansa (Ink).

Other special guests include Perth Tanapon, Tay Tawan, Up Poompat, and Gun Attaphan. I enjoyed their brief inclusion into the story. It’s like a cute GMMtv Easter Egg.

There weren’t enough episodes, in my opinion. We had more to explore about the pair of Tess and Tum.

Also, the pacing in the middle could have used some tightening. The working friends’ montages went on a little too long for my taste.

Also unhappy that the lovely Dr. Jeab didn’t get her happily ever after. I feel like there aren’t many happy storylines in BL, especially for non-femme presenting lesbians, and I wish there were.

Tun and Tess were underdeveloped. We only knew about what they went through, as seen from the eyes of Talay and Puen while in their body. I would have loved to see both Tess and Tun as they were transported into Talay and Puen’s world and into their body. What happened between them? How did they acclimate? Is there a secret society in our world that helps them get back to their own universe? There is definitely a missed opportunity here.

All in all, it was an enjoyable fantasy BL with a solid cast and some fun guest appearances. I will look forward to seeing more from both Sea and Talay. I think they are talented actors who add some new faces to GMMTV’s usual BL boys.