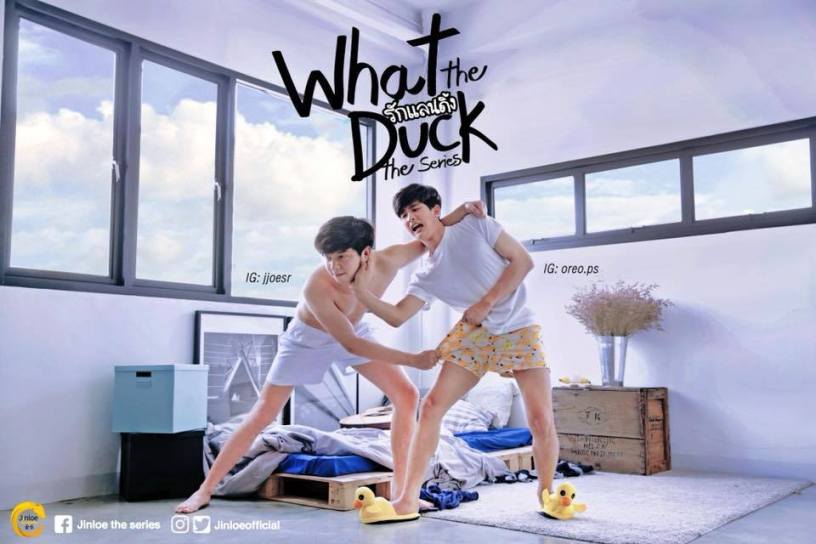 What The Duck (Season 1) aired from January to March last year and was immediately released to international fans soon right after. It also escaped my radar like I’m Your King.

Season 2 will air in (updated for March release) this year. As of today, there are already two episodes released. The series is ‘notoriously’ known for exploring the characters’ sexuality in an honest and frank manner. These scenes titillate the audience to a high degree.

Strong Charoenchai plays Oat, the 25-year old actor has exclusively acted for What The Duck series. Oreo Puwanai Sangwan is Pop. He’s 2 years Strong’s junior and plays the ‘submissive’ guy in the evolving relationship with Oat.

What the Duck: Final Call is scheduled for a March 18 episode 1 release date. Here are the latest posters for the BL drama (featuring New Year and Win)

After Pop fails to acquire his dream job as a flight attendant, he decides to join the airline’s catering service. Leaving his girlfriend, Mo to work as a flight attendant alone; as they applied together. Pop is immediately troubled, as his new coworker, Oat, makes interesting advances towards him. Including teasing him and calling him “wife”. While Mo has to deal with her fellow flight attendants, who constantly bully her. Fortunately, Nick, a handsome pilot, stands up for her. Mo’s brother, Pree, has an almost perfect life. As he and his boyfriend, Rambo are happily in love. But everything is about to turn sour. As people’s feelings get mixed up and they fall for people they shouldn’t. While still holding onto to past love.  [source]

I had the chance to watch episode one last year and felt that it’s not a series I would be interested in. I read a couple of good reviews and I gave it a second viewing. The acting is not “bad”, though there is room for improvement. The chemistry is what makes the series tick. It’s comedic, with some annoying scenes featuring the supporting cast.

Here’s a teaser for the upcoming season:

On Season 1: At 20 episodes, it could have been trimmed down to maybe half of it. Cutting those unnecessary scenes featuring other characters who are not as interesting could make the series truly watchable.

I was hoping Season 2 will concentrate on the main couple. This is not a dramatic BL series, but more of I-will-make-you-laugh kinda show. They should stick to it and leave the dramatics to SOTUS and the likes.