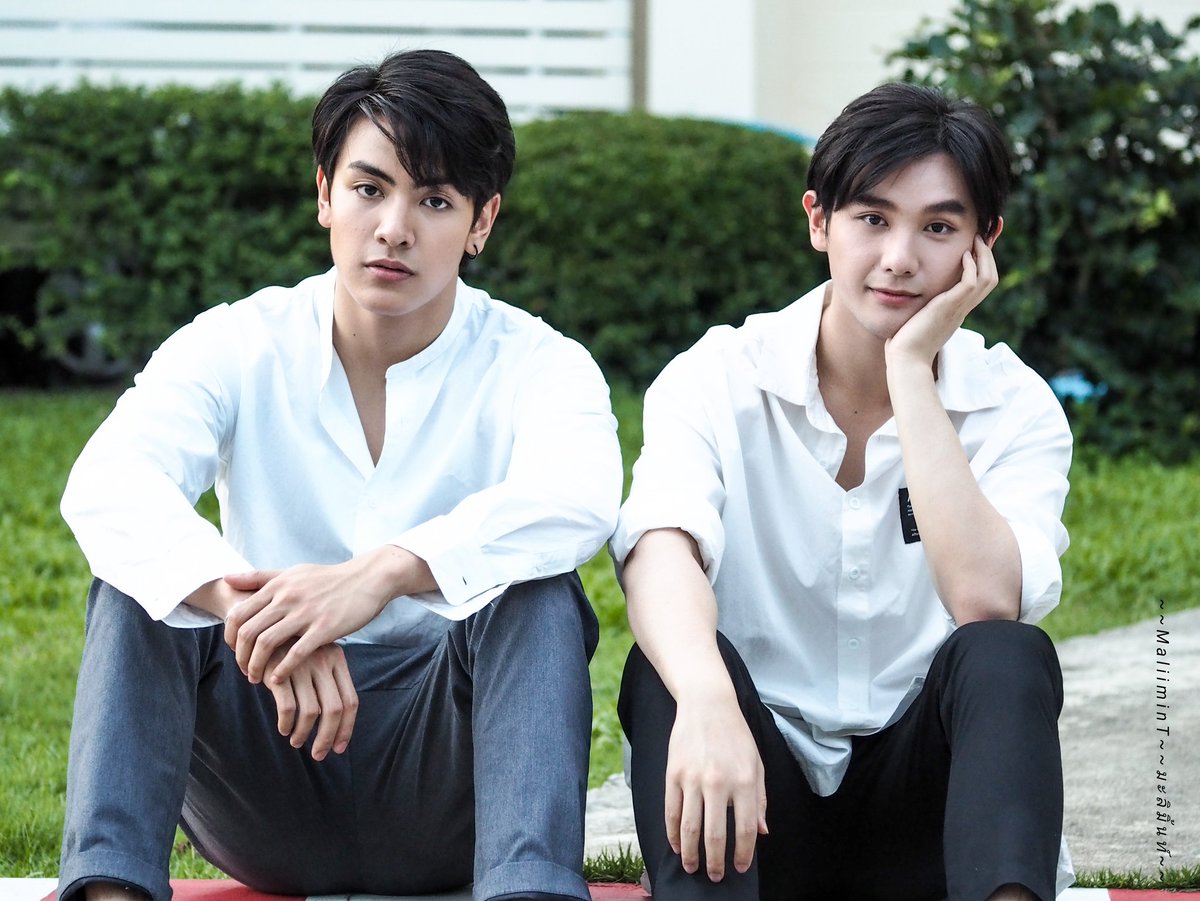 One of the most fascinating Thai BL drama, is without a doubt, 2 Moons: The Series. While many prefer the first couple Phana-Wayo, I’m quite interested in the story and character development of Ming and Kit.

Season One and its ‘original’ cast may have been relegated into the background with the introduction of a new cast, but both actors who play Ming and Kit are much appreciated!

The original cast of 2 Moons, who play the Ming-Kit couple – Kimmon and Copter.

Kimmon (Kim Varodom Khemmonta) who is cast as Ming in 2 Moons plays convincingly, pursuing his love for Kit, in quite an obvious and open way. Copter (Copter Panuwat Kerdthongtavee) was both coy and charming in his own way as he initially rejects Ming’s advances, but in the end ‘succumbs’ to the ways of love. Kimmon is more natural, of course, while Copter is a bit tentative. It somehow stiffens some of their scenes together. I’m not a fan of Kit’s hair either. I thought it lessens his appeal. Kimmon did great because he exudes confidence in most of his scenes.

Below is Ming-Kit moments in Episode 1 alone. Other video clips are available featuring the couple in succeeding episodes.

What I like about this couple is that they began with some animosity (on the part of Kit, anyhow) and slowly develop feelings for each other. There is some struggle on how Kit began to accept Ming’s advances and his intentions. I like that there are conflict and argument. It makes the relationship interesting.

Both characters have substance and how they are portrayed depends on the actors’ capacity to “read” his character and be able to deliver to the audience.

Here are some stats about Ming and Kit:

Fast forward to 2 Moons 2: The Series, which will premiere on the 22nd of this month, we have Joong Archen Aydin as Ming and Nine Konchit Boonsatheepakdee as Kit.

Here’s what dir. Anusorn has to say about this particular couple!

In every scenes @ChenRcj knew what he have to act. He’s the one who ask me all the times to make sure that he understands the character. I never worry about @achidb he's a perfectionist. Sometimes the first take was the best already, he was so professional! https://t.co/xOql8w9mEc

I am already biased towards Joong Archen. I find him to be incredibly attractive and so photogenic. For me, he’s the perfect Moon!

Knowing it’s dir. Anusorn who will guide them throughout the series is an incredible advantage to the cast. The filmmaker behind Present Perfect is not only qualified to handle this series but has proven time and again that he has what it takes to produce quality film projects.

Dizi Mania interviewed Joong, and here’s one of the questions:

2 Moons 2 wrapped up shooting a short while ago. How did the filming process go? Did you have fun at the set or was there anything challenging?

Yeah, we finished shooting. We had some workshops before that, though. We received acting training. There were opportunities to get closer like going to the movies, for lunch or dinner or go shopping. This series is a love story, so these kinds of things are necessary in order to have two strangers act on scenes where we see them bonding. To be honest we had a tough time during our first scenes, in our first days, because everyone was a novice. As you know, the cast was selected from inexperienced people through auditions. They were willing, too, of course. But we all got used to the tempo as the filming process continued and got a good grasp on what needs to happen before or during a scene, such as the camera angles, where the light lands or the order of our lines. The actors, as you would expect, have to wait their turn between others’ scenes and we just joke around when we’re waiting. So the filming period wasn’t as tense as we expected. Everyone was so nice to us, we were all like brothers.

We have yet to see the on-screen chemistry of Joong and Nine, but I’m anticipating a lot of scene-stealing by the two vis-à-vis the main couple of Phana and Wayo.

Of course, that remains to be seen!