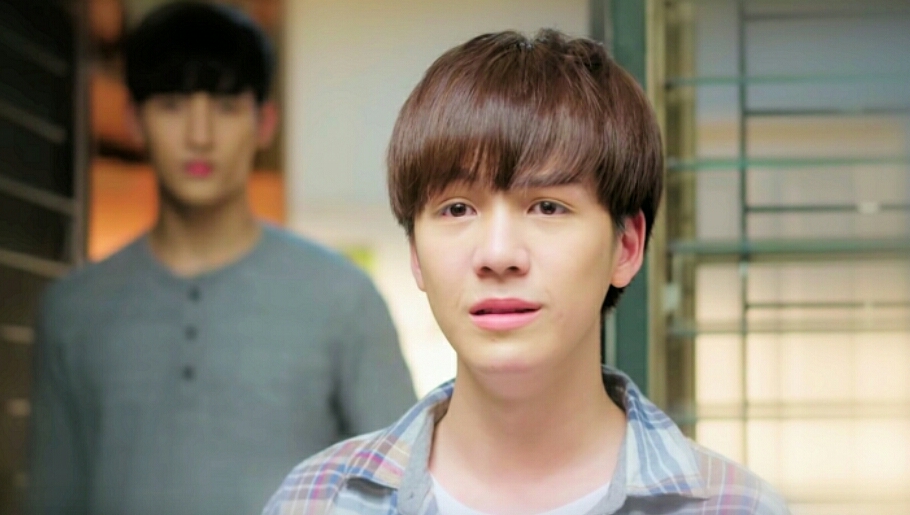 Until We Meet Again – Episode 12 [Review]

I’m not going to call this episode an emotional powerhouse. Not that it isn’t, but that the emotions don’t trend to the side of devastating. Tears of happiness? Pretty close …

The first scene is maybe sometime after October of 1969, and Intouch’s parents reveling in the newest addition to the family. The birth of their son Intouch Chatphokin shows an elated father singing the praises of his new son, and exclaiming smart and good looking he will be. Also present for the celebration is Intouch’s much older sister, Antika. Here as a young adult played by Thai actress Ploy Sornarin, who at only age 17 won the 2018 Thailand National Film Association Award for Best Supporting Actress for her work the horror film “Reside”. Again, the talents and quality of the accompanying Thai actors and actresses in this series about “The Red Thread” just illustrate the extreme efforts and desire for dignity that went into producing this BL series. The scene leaves us with a pleasant sense of quiet and happiness.

We cut to Pharm’s apartment where Pharm is cooking, and he’s cooking for what appears to be an army. Dean has stayed the night and comes into the kitchen to “help”. By his actions, he causes Pharm to remember earlier times where he and Pharm were just becoming more aware of each other, and Dean lent a helping, higher hand. Pharm insists to Dean “Don’t tease me, I was shocked at the time.” Dean retorts affectionately, “Don’t ever run away from me again”.

Stopping to reflect for a moment. This episode’s subtitles featured many translations from Thai to the English verb, “tease”. We’ve encountered this before as there are several methods of expressing a thought in the Thai language, especially for addressing one another with respect, to a simple affirmation of “yes”. I looked up varying Thai words whose translations could end up as the English verb “to tease”. In fact I found more than 12 different Thai words that could be translated to English this way and many other ways including but not limited to: tease, kid, joke, provoke, poke, jab, punch, taunt, flirt, “take liberties with each other”, chuckle, molest, misapply, and even “pull ones leg”.

As you can see, Thai is a wonderfully varied and colorful language in and of itself, and us poor folk who rely on “subtitles” and translation miss out on a lot of subtlety.

Back to our episode, Dean is assisting Pharm in prep for “merit” for the Buddhist monks, and their trip to Temple. This scene also contains a line, adlibbed by Ohm about coconut, which P’New kept in the scene. What follows is a pleasant, and sometimes funny conversation for the next 10 minutes or so between Dean and Pharm.

They receive a blessing from the monk when presenting their merit, and the monk advises them to give an offering and do the Buddhist ceremony of pouring water. In this case, the ceremony can be part of a traditional Thai wedding, to dedicate merit to a long-lasting relationship. I would be so happy for the two of them.

Dean and Pharm proceed to temple with an offering, and receive a blessing from the seated monk, and participate together in the spiritually fulfilling ceremony, with monk given them advice and cautions for which they must be aware to deal with. Forgiveness is the takeaway word from their visit.

By no means am I a religious person, but the thought of being able to receive a blessing for my same sex relationship that we’ve been in for 28 years has an alluring appeal, and in some ways leaves me wanting.

Dean and Pharm are in the car, driving to an as yet unknown destination. Pharm is dwelling on the caution from the monk in his mind, and his internal monologue is wrought with self-recrimination. All is well though as Pharm’s new outlook dismisses the negativity, and further, affectionate reassurances from Dean put any doubts to rest.

As revealed to us in a scene from the Teaser, we have a good idea to where Dean is driving. Pharm telegraphed the fact himself in the previous episode expressing the willingness to meet with Antika, Dean’s grandmother. Ohm’s and Fluke’s performances here are beautifully understated, and simply show their professionalism in convincing us of their love for each other as Dean and Pharm.

I will say here that there is indeed a meeting between Pharm, introduced as Dean’s “lover”, and Antika (Tarika Thidathit), along with many more “reveals” to Pharm.

The performances from this trio of actors in this sequence can be considered some of the best in the series, especially from Fluke at the front of the house, preceding the meeting.

More family shows up, and that English verb “tease” gets a really good workout, implying I’m sure, many of the meanings I listed above. Are there happy tears? Of course, I wouldn’t expect any less. However, the episode is not done with us yet. There is still the swimming trip that Dean promised Pharm, and the reminder that Dean still hasn’t gotten his reward from Pharm after winning the swimming match.

We cut to early morning and are watching Dean and the swim team members arrive and prepare to board the bus. Pharm arrives and the two of them become the center of attention. They’re on the bus, going away for the trip to Kanchanaburi, where the Kwai River Bridge still exists, despite what Hollywood tried to teach in the ‘60’s.

During the trip we get to watch all the swim team have fun and what appear to be good relationships between the actors.Some of the selfies taken on this trip appear to have made it to Twitter. I will say that the way Team responds to the affections of Win make me think he doesn’t want to be “shipped” with the good-looking bleached blonde.

Bringing this episode to a close is a reminisce of some of the good times between Korn and Intouch, with a surprise from Intouch.