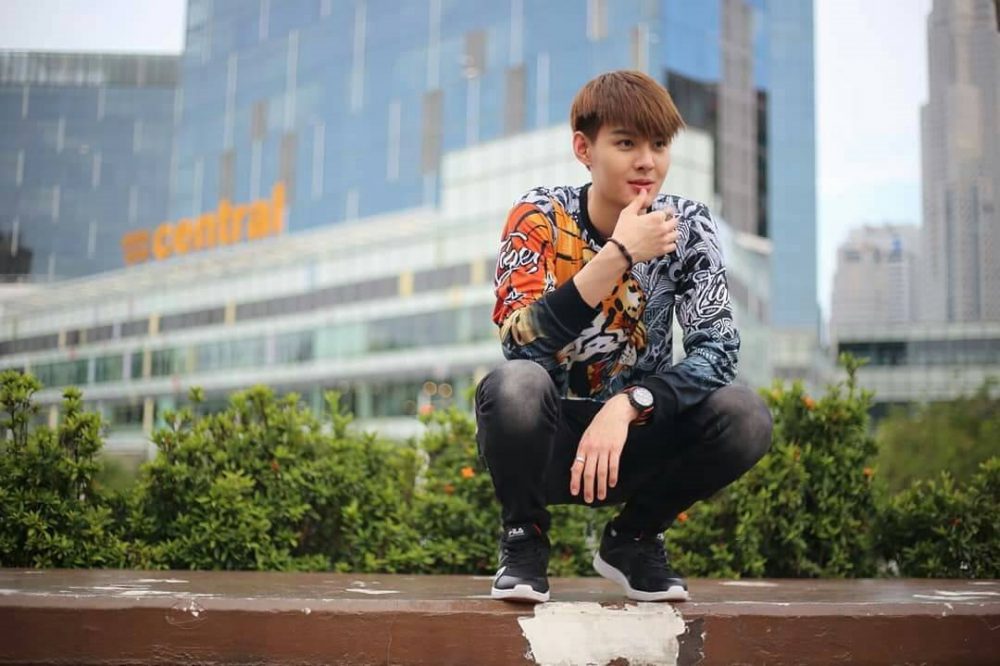 With such a memorable nick name as Saint, Suppapong Udomkaewkanjana has created quite a stir, not to mention a massive loyal following. Portraying the rich gay boy Pete in Love By Chance, he almost redefined what it meant to be cool.

Updates: We are long overdue to update our profile of Saint. So many changes for his career and personal life have taken place in the year 2020 until the present day. Let’s see what he’s been up to. If I had to call 2020 something, I would call it the year of Saint. From an uncertain future from the end of Love By Chance, like a phoenix. he rose majestically from the ashes to begin again. It begins with WhyRU.

As seen in the article below, Saint took the role of Tutor opposite newcomer Pruk Panich, Nicknamed Zee, who played Fighter. The chemistry between them was evident on screen and offscreen, with their camaraderie mesmerizing when they were seen together.

Unfortunately due to the Covid 19 pandemic, the filming of WhyRU went on

While his character “Pete” faces the usual ‘identity crisis’, self-doubt, bullying, and the likes (as any gay boy), he maintains this clean, positive image. If someone like Saint is gay, it somehow sends a powerful message that people cannot be pigeon-holed based solely on their sexual orientation.

31 January 2020 Update: There was a previous backlash following Saint’s interview when he was asked about his role in Love By Chance. An excerpt of that interview is here.

A subsequent interview was translated (see tweet above) and here is a short quote:

Yes, actually I know it very well. I understand why there might be very harsh reactions and many other problems. But I hope for everyone’s understanding. Every single work has it’s own issue but there’s always a way to solve it if we try our best.

Is the series worth a watch? You bet! Here’s what it’s all about:

Pete is a handsome and rich university student that is incredibly timid. His shyness is caused by the fact that he tries to hide that he is secretly gay. By chance, Pete gets hit by a kind-hearted boy on a bike. The boy, named Ae apologizes and helps him up. Whenever Pete trusts someone they use him for his wealth. While he was getting abused for money, Ae saves him. Over time, Ae protects Pete from the world; he takes care of him. But somewhere between the intense closeness and soft touches, Ae begins to feel more than how a friend would. Yet, Pete doesn’t want Ae to know the pain of being ridiculed for dating a man. Thus he ignores his feelings for Ae. But Pete falls deeper and deeper in love with the kind-hearted boy on the bike who once hit him, by chance. [source]

While fans have been waiting for the second season of Love by Chance, it seems it will not push through.

Update: As of December 2019, it was officially announced that Love by Chance Season 2 is in progress and that the original cast will reprise their roles. However, Saint will not portray his role as Pete due to prior commitments. He did an interview with Dara Daily, and here’s an excerpt of that interview:

Saint: I think if they want me to take part in the series, they would’ve contacted me before finishing the teaser.

This statement is uttered as a matter of fact. No additives or spices or even a hint of sarcasm. That’s how a professional handles a question. [read in full]

This puts Saint at a disadvantage. The momentum he has earned as a cast of Love by Chance is no more. That means, his acting career is put ‘on hold’. Unless he grabs another role in a new TV series or if he ventures elsewhere (which would be a pity).

Enters Why RU? Saint is reported to have secured a LEAD role. Fans’ expectations are now running high.

[Apparently, Saint’s role is the main character, after all. A special episode has been aired and Episode 1 of WhyRU has also been broadcasted]

Saint will celebrate his 21st birthday on April 17th. While Love by Chance S2 is no more, the young actor recently got cast in the new series, Why RU?. All photos are taken from Saint’s Instagram account. All credits to their respective owners. [Update: And his birthday is best remembered by the thousands of tweets, and greets he received from fans all over]

Can Saint survive? His fans would say so, but to be a bit on the pragmatic side, let’s see – what has Saint got to offer?

Update: The same observation I maintained to be true and accurate. As of this writing, Perth Tanapon and Mean Phiravich have both announced their decision to stop accepting BL roles, after LBC Season 2. There were some reported “animosity” between the managements of Saint and the two actors mentioned. Psycho Milk is doing an extensive research on the events that occurred before, during and after and will launch a separate article to discuss it.

Most Thai actors who auditioned for BL roles are first-timers or have done very limited acting. This very nature prevented them from being ‘acting savvy’, thus the need for the workshops.

While Love Sick reminded us that our favorite BL actors have to endure days upon days of acting training, Love by Chance shows just how intense the Thais were in grabbing these somehow controversial roles. And they look way better looking!

There is more to Saint than meets the eye. One has to look deeper beyond his branded clothes and well-groomed appearance.

As an actor, he has come prepared. In a recent interview, he said he joins acting workshops after school and uses his free time to review what he just learned. This level of tenacity and dedication will make a difference.

Are you a fan? Let us know what you think!