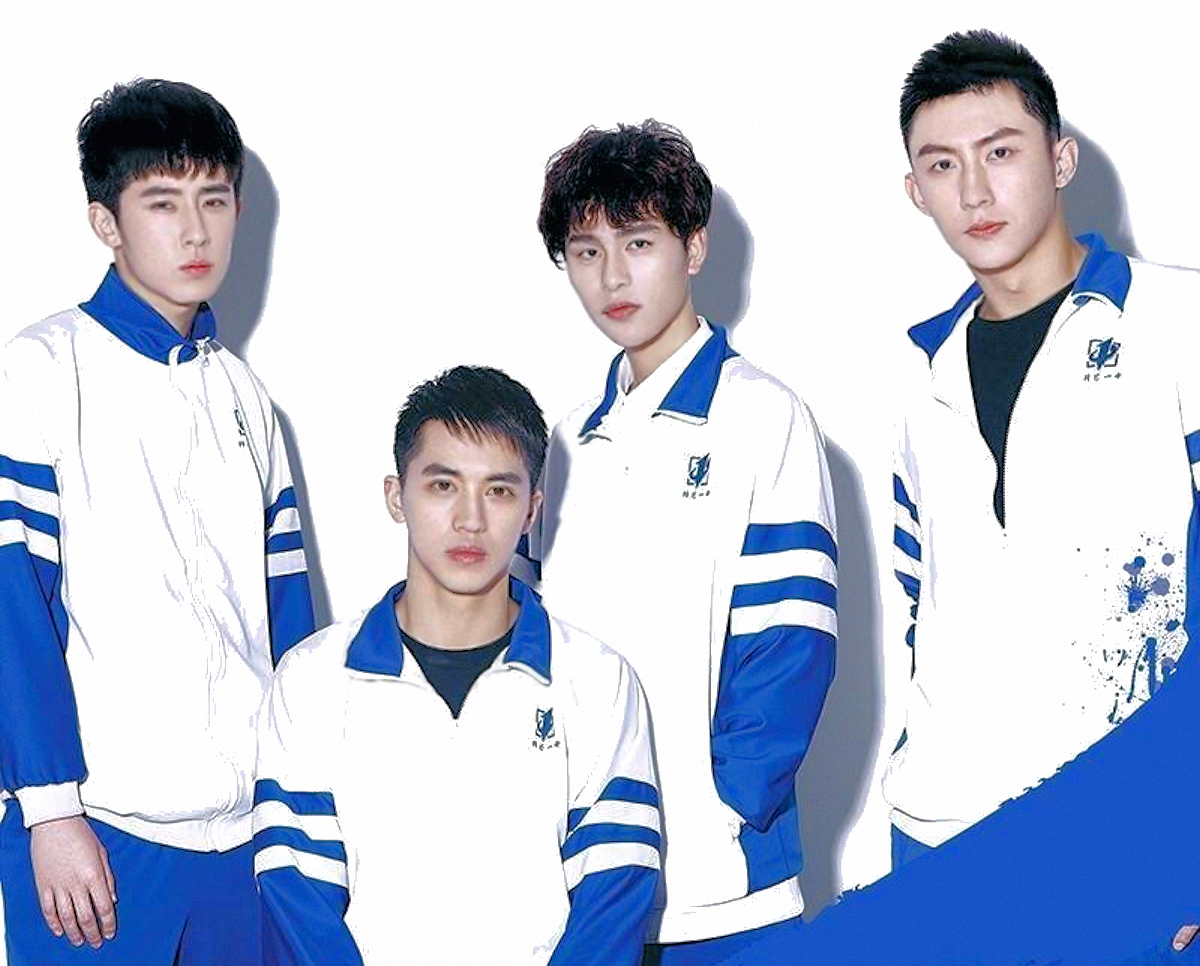 Addicted (Chinese: 上瘾; pinyin: Shàngyǐn), also known as Heroin, is a web series that premiered on the popular online video platform iQiyi on January 29th, 2016. The series aired three episodes weekly until February 23rd, 2016, when it was banned for its gay content by the SAPPRFT [obsolete acronym for the Chinese government censorship organization, now called National Radio and Television Administration (NRTA)]. This drama is based on the BL novel Are You Addicted? (你丫上瘾了) by Chai Jidan.

The handsome main lead Bai Luo Yin is played by popular Chinese actor Xu Wei Zhou. Luo Yin is a stubborn, introverted, and methodical genius. Despite sleeping his way through most classes, he always manages to be the top of the class. Most of his teachers simply ignore him when he dozes off. He lives with his loving father, his grandmother, and a neighborhood Aunt Zou. His birth mother divorced his father and abandoned him when he was a child. Luo Yin holds a deep grudge against her and rebuffs her efforts at every attempt to reconcile, even years later. He is level-headed, has a brooding presence, smiles very rarely, but cares deeply about those he loves.

If one of the main leads is handsome and level headed, the other one has to be hot and reckless. That is precisely what the character Gu Hai represents. He and Luo Yin are polar opposites. Portrayed by Johnny Huang Jing Yu, Gu Hai is the embodiment of a typical, rich, spoiled kid. He is impulsive and hot-headed. Born into a wealthy family, he is at loggerheads with his father since the death of his mother. When his father remarries Luo Yin’s mother, Gu Hai rebels, leaves home and gets himself transferred from his posh private school to a local public school. Gu Hai is used to getting his way, one way or another.

You Qi and Yang Meng

We also have the handsome actors Lin Feng Song playing the hugely popular yet utterly lazy You Qi and the adorable yet confused Yang Meng being played by Chen Wen. They are both Luo Yin’s friends and are, in some ways, responsible for bringing the main leads together.

I had a serious love-hate relationship with this drama series. There were times when some of the scenes made no apparent sense that I could determine, and I just wanted to bang my head against the wall. I binged watched the first four episodes trying to understand the frantic dynamics between the main leads. I guess the only saving grace was the tangible chemistry between the leads and the slow yet realistic progression of their love story. So bear with me as I take you on a journey through the web series “Addicted.”

Addicted uses the familiar plot machination in BL romance of  “rich guy meets the poor guy and falls for his kindness.” Gu Hai can’t stand his new stepmother’s plans to bring her son into their home and let him join Gu Hai’s fancy school. He transfers himself to a local public school, and that’s where he crosses paths with the ever gloomy Luo Yin.

Luo Yin is at his wit’s end, trying to repudiate his mother’s attempts to make his poor lifestyle better. He has no issues with studying in the local school, and at this point, Luo Yin and Gu Hai butt heads, and don’t even know that they are stepbrothers.

Gu Hai’s sudden realization of his feelings happens when Luo Yin suddenly falls ill-Luo Yin takes expired medicines and is quite sick. Gu Hai, as usual in an attempt to irritate him, mixes sleeping pills in his water, which aggravates his condition. In this scene, when Gu Hai acknowledges his mistake, Luo Yin begs him to leave him alone. But Gu Hai firmly refuses, saying that “I’m sick. You are my medicine, so you will have to suffer until I get better.” His sudden statement is actually out of the blue and surprising.

This event begins the cat and mouse chase where Gu Hai does everything possible to stay as close as possible to Luo Yin. He acts like a poor guy, rents a dingy room closeby to Luo Yin’s home, befriends Luo Yin’s father, and settles down in their home, freeloading while trying hard to seduce Luo Yin.
All this time, he also has a girlfriend who shows up whenever she misses him. But typically, their meetings always end in huge fights. At this point, I was confused as to why they are even still together. However, despite everything, Luo Yin won’t give in or accept Gu Hai’s advances. The scene where Luo Yin asks Gu Hai’s friends if he has fondled them as well had me in fits of laughter.

Luo Yin isn’t stupid, because, in the next scene, he questions Gu Hai’s true intentions. He asks Gu Hai to explain why Gu Hai is pretending to be poor and freeloading at Luo Yin’s home when it’s apparent that Gu Hai comes from a wealthy family. The two of them are at odds with each other most of the time, but I loved this slow progression of their relationship. Both have their pasts; they’ve been hurt by their parental units and are always aggressive towards each other. Both are stubborn, won’t give in, and yet can’t stay apart.

The heartbreak comes when both realize who their parents are, and the fact that they are stepbrothers. I was actually expecting Gu Hai to lose his temper and back down. But unexpectedly, it is Luo Yin who throws a fit and breaks off their so-called friendship. This scene was realistically staged, and painful to watch, as Gu Hai, for the first time ever, begs Luo Yin to reconsider. Gu Hai is a character that never submits to anyone, but he does here as he openly declares that his loathing for his stepmother is nowhere close to his love for Luo Yin.

In this show, Gu Hai won’t be the hero if he gives up easily. So now we have the craziest kidnapping in the history of BL dramas ever. Luo Yin gets tied up and delivered to Gu Hai’s dorm. Gu Hai goes into a frenzy, tries to kiss Luo Yin, and makes the most impractical yet lewd confession. However, the plan backfires when he learns that Luo Yin, in truth, wanted to mend ways with him before Gu Hai acted out.

The storyline grows ever crazier when Luo Yin learns that he might be suffering from Hepatitis B. While the poor guy is fretting, Gu Hai takes this as a perfect opportunity to have his way with nonresponsive Luo Yin. His logic is to show that a highly virulent disease is not going to stop him from loving Luo Yin. Yep, Gu Hai’s logic here makes no sense at all, and it a little off the wall.  However, they are hella romantic when he makes the statement, “I’m going to give you all the love that you lost in the last ten years.”

The story loses focus after that turn of events but slowly gets back on track, as their relationship flourishes. Luo Yin slowly starts realizing his own feelings for Gu Hai. But then we have unwanted guest roles like the Gu Hai’s rude cousin from France or Luo Yin’s ex-girlfriend who suddenly shows up after Luo Yin finally accepts that he is in love with Gu Hai. The show ends on an unnecessary cliffhanger, and now we will never know the climax, as the Chinese authorities have banned the drama series.

Addicted has a bizarre storyline that is arbitrarily stitched together to give us a group of testosterone-afflicted teenagers navigating their personal problems while trying hard to grasp their sexuality. I’m so glad that the main lead’s conflicts weren’t quickly resolved and that they didn’t fall into bed after just arguing.
Instead, “Addicted” gives us a realistic approach to the main lead’s slow-burn chemistry that set the screens on fire yet keeps us on edge. Luo Yin’s steely demeanor started showing cracks way into the series at Episode 9, when he tearfully breaks off his friendship with Gu Hai. Until then, no one would have guessed his true feelings.

Both Luo Yin and Gu Hai are portrayed as straight devoid of any gay tendencies, one of the mainstays of Yaoi-derived BL.The essence of this show lies in both the actors playing these disparate characters. Despite being newcomers and with a frenzied storyline to boot, Xu Wei Zhou made Luo Yin’s gloomy character as realistic as possible. Luo Yin is probably the most complex character I’ve encountered in a BL drama. Gu Hai, on the other hand, is like a breeze on a hot summer night, and Johnny Huang Jing Yu made the role his own.

I loved how the problems in their love story were constantly under the spotlights. Gu Hai can be a real pain in the ass, but Luo Yin never lets him get away with it. He is level-headed and strong. They are teenagers and have issues, but how they work around those issues, is what makes their relationship so relatable. From “frenemies” to best friends to finally Lovers, their journey was beautiful.

To be frank, I think both Wei Zhou and Johnny Huang’s performances stood out in the rooftop scene. Luo Yin’s father remarries, and although it happens at Luo Yin’s insistence, he gets drunk and is inconsolable. Gu Hai carries Luo Yin to the rooftop and promises to cook terrible food as well as wash his clothes for the rest of their lives – a simple promise that’s uttered with the utmost sincerity. These sweet moments and dramatic OTP throughout the series make this teenage drama a must-watch.

The fact that Wei Zhou and Johnny Huang were inexplicably close drew audience’s attention to the show. They had a very close friendship; the great chemistry they shared was drawn through the comfort zone they shared. Something entirely new at the time the show was being shot. Addicted was also the first Chinese attempt at portraying strong gay characters. It was praiseworthy, yet the efforts were sidelined because the main lead’s strong sensual chemistry brought the Chinese censors to bear and caused the show’s abrupt departure.

Read about the Controversy in Part 2