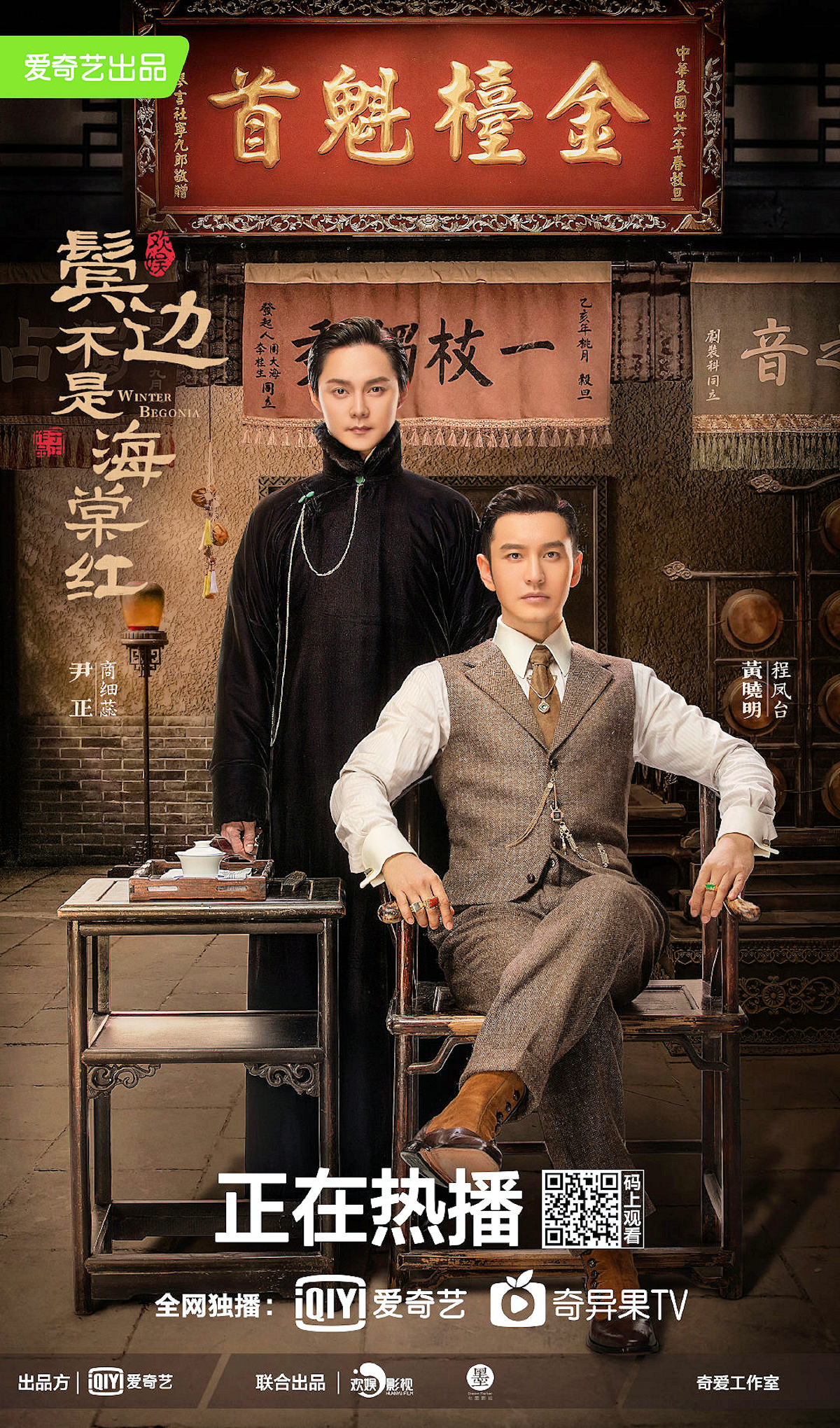 Winter Begonia is currently one of the most talked-about Chinese Bromance dramas. The show’s magnificent sets, coupled with the beautiful period costumes that take us back to the bygone era as well as the main leads’ almost bubbly chemistry is making it hugely popular. Producers spare no expense in costuming, or set design running reportedly up to nearly $1,200,000 US per episode.

Winter Begonia’s poignant portrayal of the main leads’ Shang Xi Rui and Cheng Feng Tai’s relationship is drawing some comparisons to #WangXian from The Untamed. We’ll review Ep. 11 to 20 and continue on this interesting journey.

After learning about her husband’s apparent interest in Peking Opera and Shang Xi Rui, Mrs. Cheng attends one of the shows. However, she is displeased by Xi Rui’s portrayal of Consort Yang and terms it indecent. When La Yue Hong gets caught sneaking into Cheng’s Palace, she calls Xi Rui and berates him.

This makes Shang Xi Rui very angry, and it leads to an argument with Feng Tai. These actions would be considered quite childish behavior, but Xi Rui is prone to theatrics. Problems never cease where Xi Rui exists. As such, President Jiang calls his nephew, famous Opera Performer Chen Ren Xiang to Beiping, wherein Ren Xiang challenges Xi Rui to a contest. Xi Rui accepts on the condition that the one who loses has to shave his head.

Taking advantage of the current discord between the members and Xi Rui, Jiang Deng Bao bribes the senior performers to leave Shui Yun House. However, Feng Tai rushes to help them by getting Shun Yun House the best replacements possible. Although they aren’t on talking terms, Feng Tai does his best to help Xi Rui with his performance, going as far as to get him the best-embroidered costume.

It becomes obvious that the both of them can’t stay away from each other for too long, and the discord comes to an end. The performance goes smoothly, and even with the various sabotage planned by the Jiang and Ren Xiang’s fairy footwork display, Xi Rui’s performance wins the contest. I was entranced watching him perform the footwork on a drum, Xi Rui truly is a noble character.

At this point, our main lead’s paths separate. Feng Tai encounters problems on the mountain terrains when Fan is captured. To rescue him and broker peace with the bandits, Feng Tai goes to the mountains. However, there he learns that the old bandit leader was killed, and the new leader captures Feng Tai. Thus begins a cat and mouse race where he is first rescued by the old bandit leader’s daughter Gu Da Li and later imprisoned again when he rescued to increase the deal percentage.

Cheng Mei Xin, Feng Tai’s sister, has no other option but to seek help from Cao GuiXiu. Cao Jr takes his battalion and rescues Feng Tai. In between, Feng Tai tries to get him hooked up with Gu Da Li. The circumstances are so hilarious, I can’t help laughing.

Xi Rui, on the other hand, falls prey to President Jiang’s nefarious plans when he attends the gathering to Honor their Founder. Jiang berates him for his performance and also trying to change the age-old contract system. But surprisingly, Ren Xiang comes to his rescue, and they become friends. Ren Xiang invites him to Shanghai, and a despondent Xi Rui agrees. While on the way, they stop at Nanjing, where a famous Opera Reviewer Master Liu seeks and adopts Xi Rui as his foster son. Later Feng Tai welcomes Xi Rui home but expresses his concern about Master Liu adopting him.

Xi Rui is invited to perform opera at the Royal Theatre with famous performer Hou Yu Kai at Madam An’s birthday. Master Hou reveals to him the story of Madam An’s past, and Xi Rui immediately thinks of performing an opera based on the true story. Accordingly, he asks Master Dao to write him a script, but unfortunately, Dao ends up with a story having a strong male character. What will happen in the next episodes is yet to be seen? Will Xi Rui, who is a female Dan, play the male role of the Emperor?

The chemistry between Xi Rui and Feng Tai never ceases to amaze me. They have a strong and deep connection, totally enviable. Feng Tai normally treats Xi Rui like an insolent child. That’s why even though Xi Rui gets angry on him, Feng Tai is forever patient. Their interactions are honest and emotional, especially in the scene where Xi Rui apologizes and says, “I can get scolded by Mrs. Cheng every day, but I don’t want to fall out with you.”

Feng Tai is constantly amazed by Xi Rui’s demeanor and wants to film Xi Rui on his camera so that the future generations learn about Xi Rui’s existence and talents. Feng Tai is truly a whipped man. Even Xiao Lai feels the same when she casually compares Xi Rui and Feng Tai.

However, my favorite scene would always be the one where an emotionally drained Shang hides after his performance. Feng Tai finds him and offers his silent support as he draws Xi Rui out of the somber moment and helps him onto the stage to accept the applause.

Xi Rui, on the other hand, is fierce when he accompanies Feng Tai to ambush the bandits who had imprisoned him in the mountains. He dresses up as a woman to lure them out and then proceeds to beat the hell out of them. Talk about revenge. Shang even accompanies Feng Tai to the President Zeng Hui Zhang’s home and watches as Feng Tai effortlessly force Zhang to surrender for his crimes.

Feng Tai over indulges Xi Rui’s every whim, going to the extent of buying the Royal Theatre for Shui Yun House. This drama might be loosely termed as Bromance, but the show’s producers have done a very good job masking the subtle romance without glossing over their relationship.

The main stars, “Huang Xiaoming” and “Yin Zheng” popularity has skyrocketed. Yin Zheng is currently featured on the cover of popular magazines like “Bazaar Jewelry,” “Waves,” and “Starbox.”

Huang Xiao Ming, on the other hand, has been selected as the Global Brand Spokesperson of Tissot. He ranked 3rd on “Most popular TV Actors and Actresses for April,” as reported by the VLinkage charts and 7th on “Sina Power Celebrity list for TV Actor and Actresses” for the week of 20/4 to 26/4.

The main highlight of this show is the extravagant sets and costume designs. (Psychomilk has been digging for high resolution shots of the show’s grander sets, and we’ll post when we find them.) No efforts have been spared to give this period drama, a touch of reality along with a sumptuous grandeur that sets Winter Begonia apart from other Chinese Bromance shows.

Keep watching this space for further updates as we continue to regale you with the antics of our adorable main leads.