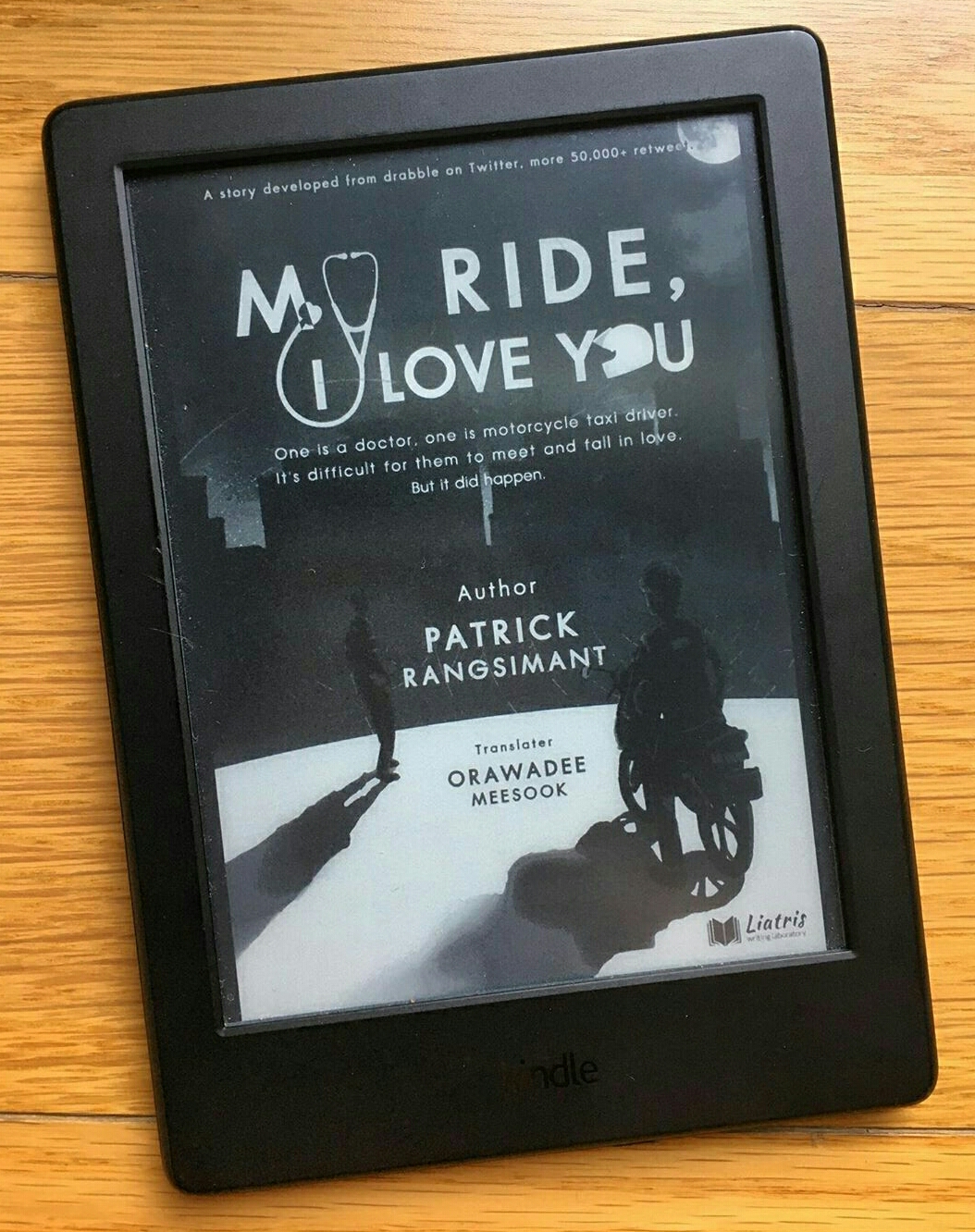 My Ride: I Love You [Book Review]

For people who follow me on Twitter, I make it no secret that I like shows and books of the BL genre. It’s also a fact that most who follow me know which shows and books I like, and the ones I DON’T like. While I have been reading M/M love stories for quite some time, I just started watching Thai BL dramas just this year. Thanks to following Psycho-milk.com & the owner Red on Twitter, I always have an eye on upcoming BL dramas, and one that I am very excited to watch is My Ride, the Series which is an adaptation of the book – My Ride, I Love you.

My Ride, I Love You actually started as Twitter fiction and was later expanded into a full novel in the Thai language. Fortunately for us who don’t speak Thai, the author decided to also release the English translation on Kindle for international fans like me who love reading as much as watching these dramas even before the series TV debut.

“I’m a motorcycle repair guy, so I repair everything. If something breaks, I fix it. I’m not good at finding a new one. Nothing can last forever, doc. If you use something every day, someday it will break. Don’t expect things to be invincible. It will break, no matter how high the quality. When it breaks, simply repair it and continue to use it with care, it will last longer, doc. But if we buy a new one as soon as the old one breaks, we’ll just end up replacing it repeatedly.”

My Ride, I Love You, is the story of Doctor Tawan and a motor-taxi driver Mork. Tawan first meets Mork when he uses his motor-taxi to go to his boyfriend’s place. As these visits become frequent, Dr. Tawan’s conversations with Mork expand from pleasantries to daily life, family, and other topics. Gradually, they become friends and end up spending more time together. While Mork starts having feelings for Tawan, he never oversteps his boundaries and instead makes peace with just keeping Tawan happy and inspired by his hard work. While Tawan is a practical but kind and honest person, he appears to be someone who is blindly in love and it takes a while for him to see the reality of his relationship with Mork. On the other hand, Mork is a simple guy who is loyal to his family and is quite naïve about how the world works. It’s no wonder that when these two meet, it takes them an eternity to act on their true feelings.

As we meet different people from Tawan’s & Mork’s life, they all impart important lessons about love to these two men, as well as to readers. One of the most beautiful story arcs is that of Mork’s Uncle Loong and Ar, who are the epitome of love and family. Another favorite part is the use of a fictional Facebook #DoYouWannaHearMyStory page as part of the book’s plot. When Mork discovers the page, he realizes he’s found an outlet for answers to his questions of the heart. The thoughts of the page admin Mek are certainly unique and something I had not read before about love & relationships. For instance, on the topic of one-sided Love, Mork learns that instead of succumbing to bitter feelings, we can use that unrequited love as a source of energy in creating happiness for yourself and the other person. Another important lesson from the admin of the page is on being a judge of someone else’s relationship and whether it is always right to act in the name of justice and truth.

My Ride, I Love You is not truly a love story, but more a journey to reach the beginnings of the love story for all characters in the book. Since it was set primarily in a hospital, it is quite interesting to learn about the personal lives of the Doctors & Staff and showing appreciation for their efforts.

It took inspiration from the author’s own profession and life as a neurologist, which made for a unique setting for me. Even though the struggles of Doctors and Medical Professionals are not a major part of the story, it makes clear even in the smallest scene to ask for understanding and respect for these folks who work tirelessly for the Patients’ sake. In the times of a Pandemic, the responsibilities increase many times over, and that’s something we should never take for granted. All characters are fleshed out and have their own role in the story without any unnecessary spectacle. The progression from strangers to friends for Tawan and Mork is quite relatable and sweet. The conversations with their respective best friends about love and their doubts provide for a lot of positive introspection.

Kudos to the translator used for the book. To keep all the essence of settings, casual banter, and the cultural references intact throughout the book is not an easy task. The resultant language is simple; the flow of the story is smooth throughout, and even with an open ending (or not), this book is quite satisfying to read. Though this is a BL/ LGBTQ story, please rest assured that there are no sexually explicit scenes, and the book can be read simply as a story about friendship, love, and Family. While the casting of the show has already proved that there will be some alterations to the story from the book, I trust that the author will keep the show as interesting and honest to the expressed feelings between Tawan & Mork. I cannot wait to see this as a live-action show as I already like the actors who’ve been chosen to play the lead couple in the series.

Pratibha (Prats) has her own personal website where she reviews books (of course!), movies, and BL series (of late). Check her out!