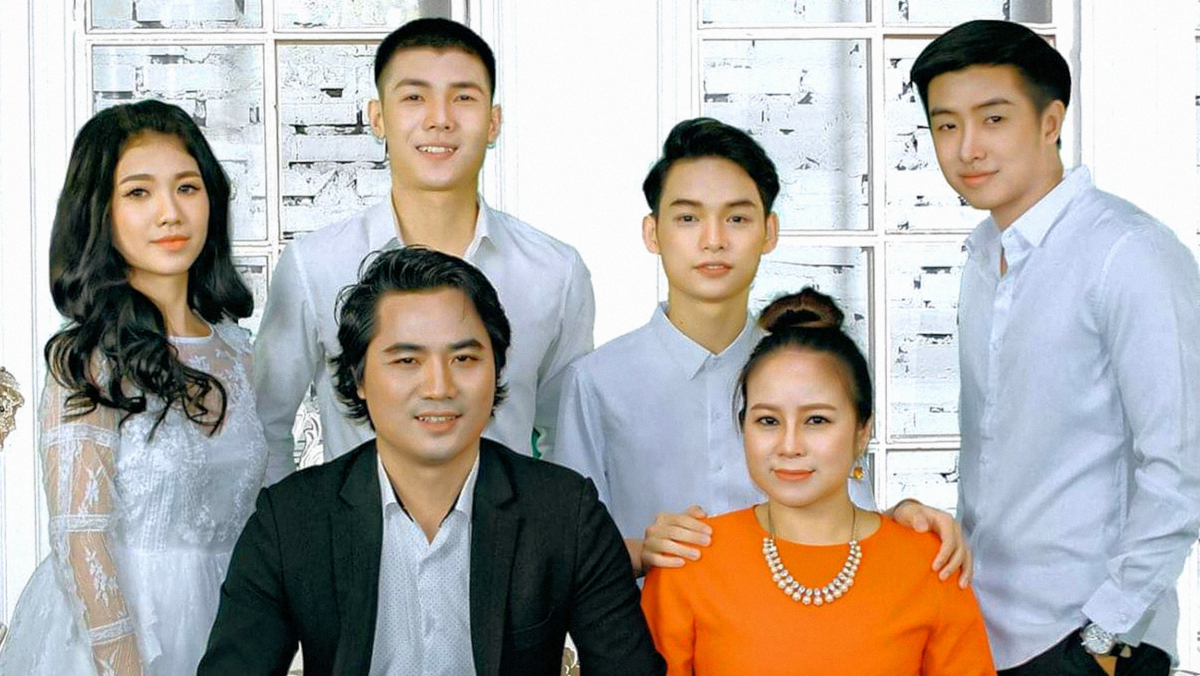 “Adam’s Secret 2 – My Brother” is the Vietnamese drama adaptation of Thai actor Fluke Natouch’s popular film “My Bromance.” Even though the concept of “stepbrothers falling in love” remains the same, the show’s Director/ Writer Hao Phung provided an ingenious twist to the storyline and made it more original. The mini-series premiered on November 17th, 2017, on CiF TV YouTube channel and has so far exceeded more than 1M views. Without further ado, let’s review this adorable mini-series!

Phong, played by Nguyen Hoang Anh, is the older stepbrother. He is quite arrogant, broody, and rarely interacts with anyone. Phong did his studies abroad and returned home to manage his father’s Beverage Store Chain. He lost his mother at a young age and, as such, has a tough exterior. There is a considerable difference between Fluke TeerapatLohanan “Golf” from My Bromance and Phong. First, he is not a high school kid going through teenage angst. Also, he is never outwardly rude to his father or his new stepmother. He might not accept them, but he is never disrespectful.

Vu portrayed by Nam Mario is the perfect replacement to Fluke Natouch’s “Bank.” He is bright and outgoing. As against Fluke, who played a subdued character, Vu is emotionally stronger. He never backs downs whenever Phong challenges him, but he is also very gentle with his broody new stepbrother. He is entirely supportive of his mother’s remarriage and tries hard to be a part of this new family.

Vu Phoung plays our second lead, Thien. Unlike Mark Withawat’s “Thom” who was relegated to act as Golf’s love rival, Thien has his own storyline, which runs parallel along with the main leads. Although in the initial episodes, he does take an interest in Vu, which makes Phuong jealous, both of them remain friends.

Van, played by the beautiful Ngoc Hien Tran, is Phong’s conniving Fiancee. Although it’s clear that Phong does not love her, he still agrees to marry her because she blackmails him. Despite being aware of Phong’s love for Vu, she uses various tactics to separate them. She is sharp, intelligent, and wants to marry Phong because he is rich. This character didn’t exist in the original film and was written solely for this mini-series.

“My Brother” revolves around Phong’s life, and he is a cold-hearted person. He manages his father’s chain of Beverage stores. He lost his mother at a young age, and as such, Phong has never experienced a mother’s, gentle love. And one day, God gave him a stepmother. But the focus here is not on his stepmother but is on Vu, his new stepbrother.
The boy who is warm like the sun melts Phong’s icy heart and reverses his quiet daily life. And despite trying hard to deny and hide it, Phong still admits that he has feelings for this boy and that love can also overcome the brotherhood. What will Phong do when his feelings grow stronger, faced with the family, lover, and public opinion? Will he continue or stop this emotional feeling?

We are introduced to Vu as he is packing his clothes. His mother enters, and they have a really cute conversation where she asks him to adjust to his new stepbrother. Vu is entirely cheerful and mature when he comforts his mother for the hardships she faced raising him alone. He assures her that he can handle things and that she should seek her own happiness now that he is all grown up. Next, we are introduced to Nam, Vu’s cousin, who is there to send them off.

Phong is the next entry, and although he isn’t exactly welcoming when Vu and his mother arrive, he doesn’t berate them either. Vu is instantly intrigued by his new brother. He tries to get friendly with him, but Phong scolds him. You actually feel sorry for the cute little puppy.
Vu loves cooking, so he sends his mother to pack for her honeymoon and cooks dinner for the night. He is entirely cheerful when Phong comes to the dining table. But Phong is extremely rude “You should act normal and be selfish. I would feel better. Do not interfere in my life.” But Vu promises that he will keep trying hard to be a good brother. The confrontation ensues!

Vu and Phong’s newly-married parents are leaving for their honeymoon and instruct them to take care of each other. Phong can’t take it anymore and leaves the dinner midway in anger. Vu rushes to comfort him. He is entirely honest as he promises to keep trying until Phong accepts him as a part of his family. Phong, however, backs him against the wall, and they have a charged moment where it seems that they might kiss! But Phong makes it clear that such a thing would never ever happen, and you wonder if he is talking about the almost kiss or his stubbornness to keep Vu at arm’s length. Vu is left disappointed.

Their parents leave for the honeymoon, and since Vu takes his promises very seriously, he cooks lunch for Phong. But in his usual style, Phong mocks him and refuses to eat. Vu very patiently reasons with him, even going as far as to say that he won’t be in the same room when Phong eats. As soon as Vu leaves, Phong tries the food, and of course, it’s delicious. As he finishes off the food, Vu sneaks in and jumps with joy. This kid is really sweet!

Naturally, we are then blessed with the mandatory shower scene with Phong. While he comes out of the bathroom wearing just a towel, Vu rushes into the room with a glass of milk. He is flustered to see the half-naked Phong and rushes out. But Phong pulls him back, and they fall into the bed. Another charged moment that gets spoiled when Phong warns Vu to never enter into his bedroom.

New characters are introduced in this episode. The next morning, Vu is quite flustered and even goes on to wear sunglasses to avoid looking into Phong’s eyes. But Phong doesn’t understand personal space and loves crowding Vu whenever he has to answer the little guy’s questions. He tells Vu not to cook lunch for him as he would be busy.

Phong next walks into his beverage store, and we get to know about his staff- Manager Lam, who seems to be his close friend and the clumsy waiting staff, Tung Son. Another interesting new entry is Thien, who is at the store for his meeting. Since Phong refuses to answer to Vu’s calls, he decides to cook lunch and surprise him at the store.

As Thien walks out of the store, Vu rushes in, and unknowingly Thien knocks him down. He profusely apologizes, but then he notices the mole under Vu’s eyes and is instantly entranced.

This episode, we finally get to see some cracks in Phong’s tough exterior. It is quite interesting how he suddenly changes tracks. Vu enters the store while searching for Phong. He inquires about Phong with Tung Son, who is increasingly rude to Vu. He still hasn’t realized that Vu is the owner’s new stepson. As if Tung Son wasn’t enough, Van walks in and introduces herself as Phong’s Fiancee. Vu is utterly shocked and walks back home dejected. At this point, I guess he has started to develop feelings for his cold-hearted elder brother.

As he is walking home, Thien offers him a ride on his bike. They get introduced, and Thien can tell that Vu is sad. So he takes Vu to a nearby park and tries to cheer him up. They get real friendly, and that night, Thien gives him a ride home. Phong is anxiously waiting at home for Vu. He rushes downstairs when he hears the sound of the bike. Both Phong and Thien have an intense staredown. Vu thanks Thien and rushes inside. As soon as they are in the main hall, Phong confronts him, and it’s clear that he is feeling jealous.

I was too disappointed with the sad ending of “My Bromance,” so this mini-series is a total blessing. Although the core concept is similar, what makes this show unique are the unique differences in the storyline and the main lead’s chemistry. I’m not comparing, but I found Nguyen Hoang Anh “Phong” much more intriguing than Fluke Teerapat’s “Golf.” Nguyen portrays Phong with so much more realism that the mystery surrounding him captures our attention.
Obviously, there is no comparing seasoned actor Fluke Natouch’s “Bank” with Nam Mario’s “Vu.” But I love how Mario plays the character in an entirely refreshing way. His expressions are so sincere and sweet that you can’t help but fall in love with Vu. I know it might seem confusing, but I preferred watching Vu with Thien more. They look so good together; you can’t help but ship them. However, the fact remains that this love story is centered on Phong and Vu, so Thien sadly is just a second lead. We do get to learn more about him in upcoming episodes. He has a mysterious past, which will keep you hooked. Keep watching this space as we bring more updates from the mini-series, which is far more entertaining than the original!