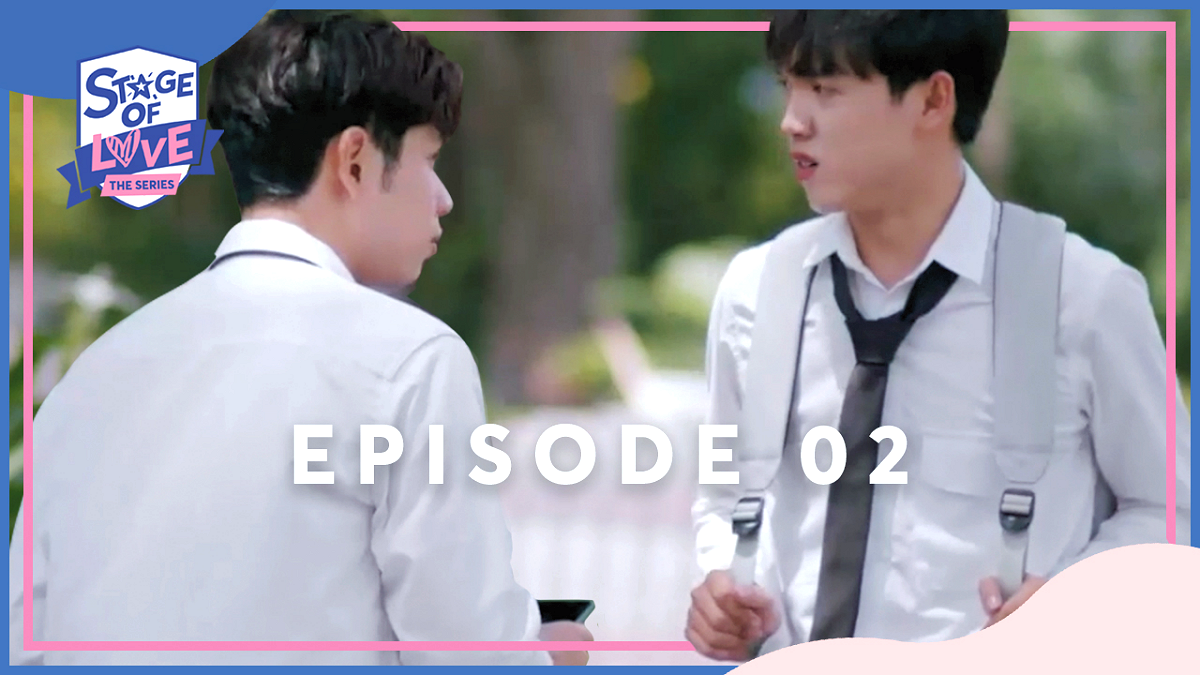 SOL – “Stage of Love’ the Series” is slowly picking up pace, as we get to know more about the main characters. The chess pieces move into their positions as chances evolve for our protagonists to get closer and learn about each other’s secrets. Let’s review and learn what transpired in Episode 2.

I was quite skeptical about Duc because he seems to the reason behind Nguyen’s stubborn refusal to join the Drama Club activities. The episode rolls forward with last weekend’s cliffhanger. Nguyen is about to walk away from the club’s auditions when Duc walks out. Although Nguyen seems nervous, Duc is pleased to see him. So apparently they don’t have any bad blood nor are they enemies. Like Khanh, Duc tries hard to reason with Nguyen to help judge the newcomers. But Nguyen refuses and leaves.

The fangirl, along with Bao and some other newcomers, is waiting for the auditions. Van Ahn is clearly stressed out. Duc arrives and cheers her up, and she is totally stunned. Obviously, I guess they will become a couple in the upcoming episodes. The auditions start, and each student performs. It’s clear that Linh and Bao are the best of the lot. Khanh, Duc, and Truc are impressed with them.

Nguyen is at the playground with a forlorn expression. Hy tries to convince him to join the Drama Club again. But he is stubborn as usual. However, Hy doesn’t give up, as he cleverly switches over to talking about his sister. Fangirl Linh is his little sister, and Hy is quite a doting, proud brother. He is sure that Linh would be selected in the auditions and, as such, would require guidance from someone experienced in drama. Nguyen guesses that Hy is trying to lure him again and calls him out.

The next scenes are really hilarious as Bao goes through a series of incidents where he misunderstands Nguyen. Linh asks Bao if Nguyen returned his bag to him. Bao has no idea what she’s talking about. So she explains about their bags getting exchanged. Linh wonders why Nguyen hasn’t returned the bag to Bao yet, as he never likes to keep other’s things. Then in the same tone, she spills the beans about Nguyen liking her photographs. Obviously, she is lying, but Bao believes her and misunderstands Nguyen. Linh is selected to play the part of Juliet, and Bao gets the role of Romeo. Van Ahn invites Duc to a movie date, and surprisingly he agrees.

Another hilarious situation ensues. Hy plays some shot at the playground, but his pants get ripped. He has a date with Khanh and so asks Nguyen to get him spare pants. Since Hy is hiding behind a tree and clearing embarrassed, Nguyen decides to help him. Bao passes closely at that exact moment, sees them, and yet again misunderstands Nguyen.

While waiting for Hy, Khanh again tries to reason with Nguyen. She is truly impressive as she tears apart all of his excuses and doesn’t give him a chance to refuse. Hy and Khanh arrive at the movie theater, but unfortunately, Van Ahn and Duc are at the same theater. Seeing them, Khanh hides and then requests to Hy to go somewhere else. It seems like they are hiding their relationship, and although Hy doesn’t seem comfortable, he agrees for Khanh’s sake.

Nguyen is watching some video on his iPad, but Bao again misunderstands him. Nguyen is clearly irritated by Bao’s behavior. As Bao and Lihn are rehearsing their parts, Khanh walks in with their new instructor. Nguyen walks in, and both of our protagonists are shocked at seeing each other.

I must admit that I was quite apprehensive about Duc’s role in this drama. However, he seems to be quite a mature person. We still don’t know about the incident that turned Nguyen into a recluse, but Duc seems to have forgiven him. Nguyen, on the other hand, seems to carry a lot of guilt and can’t seem to forget about the accident. I find it really amazing that there is an entire army of friends trying so hard to convince Nguyen. Khanh might be doing it to help the newcomers, but the fact remains that she wants to draw Nguyen out of his self-imposed exile. The hilarious situations where Bao keeps misunderstanding Nguyen added the twist that was needed to get this love story started.

I’m actually intrigued by the upcoming episode’s preview. Bao and Nguyen’s interactions are adorable. It’s clear that Nguyen likes Bao, and his idea of spreading rumors about them is interesting. For someone who doesn’t talk much and is rude to most people, he is certainly besotted with Bao. I’m looking forward to the next episode to see how these dynamics progresses.