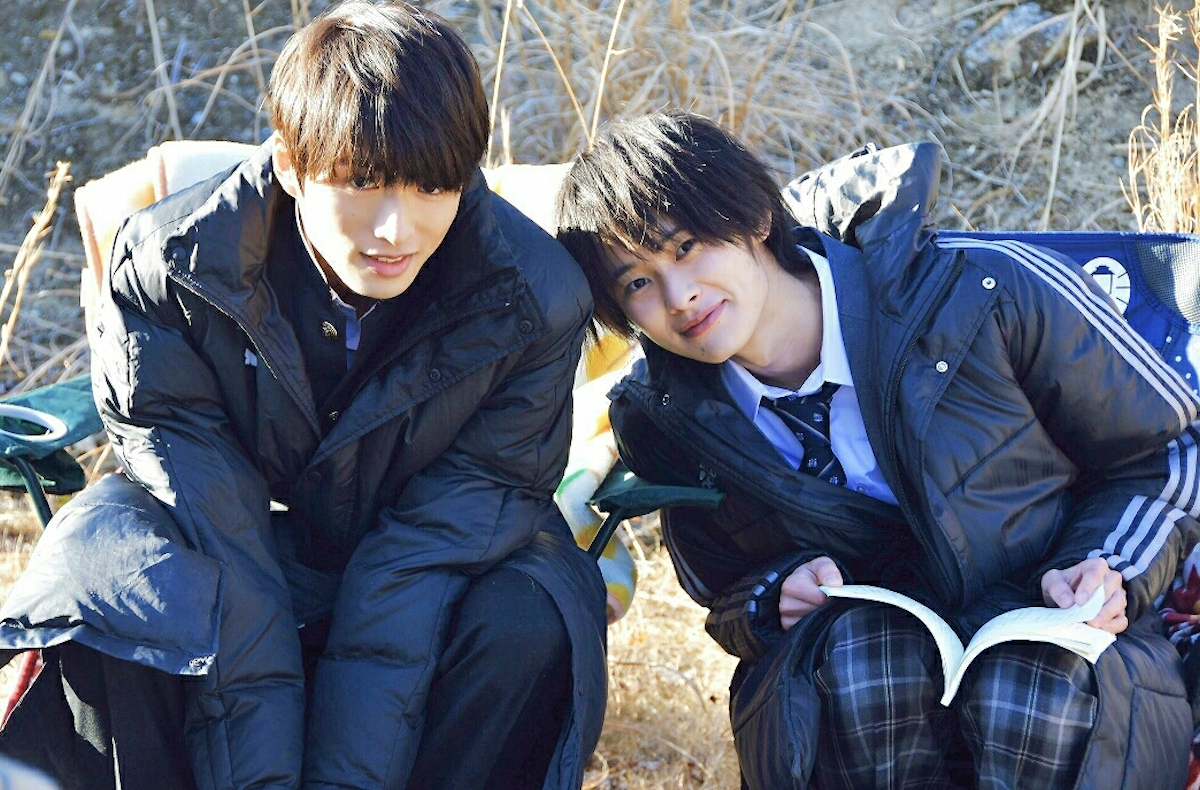 In the first episode, we watched Ito playing his lonely game walking on the line when he meets another high school student, the naïve but friendly Nishi playing a similar game of ‘white line.’ Ito instantly falls for Nishi’s uncomplicated charms. As a result of an impulsive kiss, the boys’ feelings for each other blossom and thus a new game starts – to walk together.

The second episode starts at the same meeting spot, the same line where the boys meet daily.

We are just little dots that were forced into this world like this, helpless and lonely. That is why someday we search for another dot to connect with, someone that we can form a line with and live on…

A year has passed and the boys are 19 years old now and attend the same university in the same city. They are still in love with each other, having more time to meet, having fun lunch dates, and still playing their imaginary games with the same passion. While Nishi has plans for a trip to the Alaskan outdoors someday, and eating Salmon, Ito is desperate to move further into their relationship. Although Nishi does not resist any of Ito’s advances, his confused & unhappy expressions confuse Ito who is slowly losing control.

In this episode we meet Ito’s sister who has decided to go abroad instead of finding a job locally which displeases their mother a lot. Following Ito’s interaction to pacify his mom and later the conversation with his sister, sheds some light on Ito’s character. Ito admits to himself that he has always played safe in all matters in order not to fail later. His sister’s talk is quite an inspiration for the viewers and Ito alike.

In the next scene, we find the boys working on college reports together, when a call for a break from Nishi turns into an opportunity for Ito to kiss him. This time Nishi pushes him away and even draws a line to keep Ito on the other side of the room. This scene is a good step forward in terms of communication and the setting of rules of consent in their relationship. While Ito is wondering if Nishi does not like kissing him, Nishi tells Ito that even though he too wants to kiss Ito, he needs to be mentally prepared for such actions. As a demonstration of this, we watch Ito refusing to cross the symbolic line drawn earlier this time and instead asks Nishi to come to him. The shy kiss and declaration of love that comes from this scene has all the right feelings.

Later when Ito’s sister sees them together and confirms from Ito that he has a lover, her joy shows how much she values her brother’s happiness.

The twentieth year of the boys lives pass in shared joys and soon they find themselves at the end of college year, worrying about finding a job. In the twenty first year, as Nishi worries about how to decide what he wants to do in life, Ito suggests him to take one step at a time, starting with buying a formal suit. Later when Nishi mentions that he doesn’t know if simply following others will lead him anywhere he likes, Ito explains his reasons to be a working adult and his immediate goal. It is this moment that Nishi joins the world of working adults and they move in together.

Fast forward to 25th year of their life, where last four years have gone by blissfully for them.

A new person joins Ito’s workplace and she is none other than the girl whose proposal he had rejected back in high school when he had first met Nishi. How she brings a change in the relationship between Nishi & Ito will be seen in the next episode because the preview shows a lot of mixed bag of emotions and multiple possible futures for them.

While Shirasu has totally nailed the little confused but bold lover attitude in his role, I loved Raiku a lot more in the “drawing a line” scene. He appeared so vulnerable, conflicted and a little excited about taking the initiative in that scene. The scenes that follow illustrate amazing chemistry between the two of them that brings a smile of content to the viewer’s face. Their happy phases are shot in bright colors which clearly show their moods while rest of scenes have a different tone and mood. The writing is brilliant and the story so far follows closely the original manga, which might appeal to everyone who has read and loved the manga version. Both actors have done amazing work with bringing these characters to life, which is also a big thumbs up for the director of the miniseries.

There is a lot happening in the next two episodes and I am very excited to see both the actors bring out all the emotional reactions from me, like the first two episodes.

Lastly, I would like to highlight the music of the show. It subtly complements the scenes beautifully. It is majorly in English and integrates beautifully with the situations being played out onscreen. You can check the OST playlist on Spotify here.