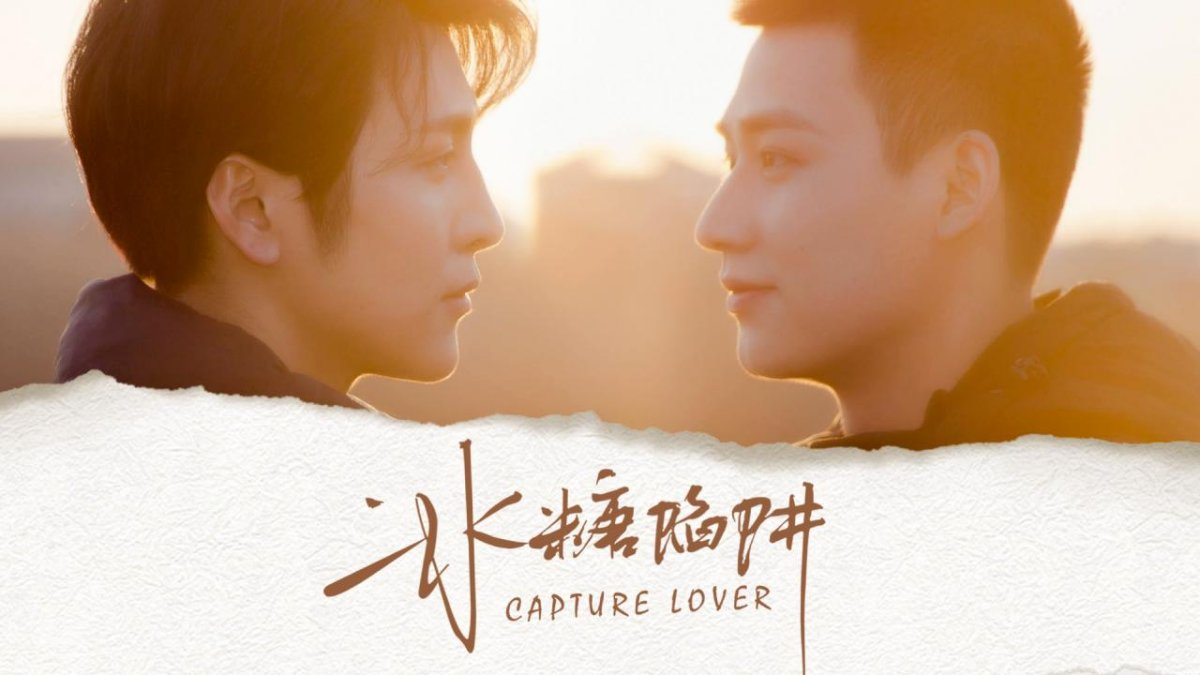 Capture Lover becomes the first gay series to have a worldwide opening since China banned LGBTQ+ content in 2016. Despite the budget constraints and difficulties faced in casting, Director Aria Lee persisted, and now this rom-com starring newcomers Luigi Zhang and Han Jing-cheng is streaming live on GagaOOLala and will very soon be available on WeTV Taiwan and Viki as well.

Han Jing Cheng, who has already acted as a Support Role in popular Chinese Gay Movie “River Knows the Fish Heart,” plays the main role of Ying Jia Ming, the son of the Company Chairman. He is handsome but totally lazy and incompetent.

The devastatingly handsome Luigi Zhang portrays the role of Ding Jun Jie. Ding Junjie is the deputy manager of the marketing department at a cosmetics company. He is hard-working and dedicated. As such, he faces major issues when the lazy Jia Ming joins the company as his new subordinate.

Ding Junjie is the deputy manager of the marketing department at a cosmetics company, while his new subordinate, Ying Jiaming, is the son of the Chairman. Since Ying Jiaming arrived at the company, his attitude has been lacking, and Ding Junjie feels helpless. However, to get rid of his ex-girlfriend, Ying Jiaming begs Ding Junjie to pretend to be his boyfriend and say he is gay. Unexpectedly, they start to develop feelings for each other.

Ding Junjie is having a meeting with his subordinates when he notices that the new recruit, Ying Jiaming, is sleeping. After the meeting ends and others leave, Junjie has a word with Jiaming. He is disgruntled with Junjie’s flamboyant attitude and rushes to Manager Lang. Junjie demands an explanation as to why the HR recruited an incompetent person like Jiaming. Lang quite crisply replies that Jiaming is the son of the Chairman. She advises him to get along with Jiaming, as he will be the future successor. Left with no other option, Junjie agrees.
But obviously, he can’t put up with Jiaming’s lazy attitude at work and hence orders him to work late at night. Junjie even goes to the extent of getting water bottles so that Jiaming doesn’t have the excuse to go to the washroom. He has him locked up until he redoes his project and gets it correct this time.

When Jiaming inquires why he is torturing him like this, Junjie honestly replies that he wants to improve his image in front of the Chairman so that he might get a promotion. Jiaming challenges that he will make Junjie pay for what he is doing. Junjie wholeheartedly agrees, and they have a charged moment.

The market data report prepared by Junjie gets messed up, and Manager Lang reprimands him. Seeing Junjie in a bad mood, Jiaming teases him, and that makes him angrier. Later, Junjie finds him sleeping again and draws a turtle on his forehead. When Jiaming wakes up, his colleague starts laughing at him. He checks his face and rushes to confront Junjie. They have a confrontation, and the battle lines are drawn.

Ying Jiaming is dressed suavely as he makes a shocking entry into the office, surprising everyone. Manager Lang calls an emergency meeting and informs everyone that Ying Jiaming would be the new Manager of the Marketing Department. Everyone is appropriately startled, Junjie, more so. Jiaming gives a half-baked speech and encourages everyone to work hard.

The resident fanboys at the office are busy gossiping about Jiaming and Junjie. Jiaming enters Junjie’s office, and as usual, they bicker as if they’ve been doing so for years. While Jiaming tries to be courteous, Junjie deduces that he is clearly up to no good. At last, Jiaming snaps and agrees that he is here to teach a lesson to Junjie.

At the end of the day, Junjie is about to leave. Jiaming texts him and asks to work overtime, even though Junjie has no other choice but to follow the orders. While Junjie is working, his friend Jiang Zhihao enters and inquires why Junjie is working late on his birthday. Junjie explains that Jiaming is taking revenge on him, and he has no way out. Junjie also calls his mother and asks her not to wait for him at dinner.

Obviously, Jiaming isn’t done irritating Junjie, or maybe he feels bad for him. So he buys dumplings for Junjie and is actually quite sweet.

“My mother once told me that eating dumplings in winter gives you a good mood. These are so delicious, stuffed with sauerkraut from Northeast China.“

But Junjie doesn’t buy his excuses and is rude to him. Junjie gets a message on his phone, and Jiaming picks it up to check the message. They have a struggle, but Jiaming returns the phone when Junjie gets angrier. Junjie accepts a call from his mother, and listening to their conversation, Jiaming learns that it’s Junjie’s birthday. Instantly he rushes out.

This episode had a lot of female lead introductions vying for our main lead’s attention. Starting from the last episode, we learn that Jiaming came to buy a cake for Junjie. He is again up to something because the bakery owner curses him and calls him a pervert.
As he rushes into Junjie’s office, the poor guy is sorely disappointed when he sees Junjie celebrating his birthday with Meng Yao. He assumes that Yao is Junjie’s girlfriend and is especially rude when he orders Junjie to get back to work.

Junjie sees the package that Jiaming holds and inquires about it. But Jiaming lies that he was hungry and bought a cake to eat. Junjie is actually surprised because he realises that Jiaming bought the cake for him and is trying to save face. Jiaming leaves and Meng Yao tries to flirt with Junjie. But Junjie is very clear when he says that he thinks of her only as a friend.
In his office, Jiaming is in a bad mood as he wonders why he bought the cake. He tries to brush away his feelings but is unable to understand why he is feeling so bad about it.
Junjie walks Meng Yao to her home. They again have a conversation where Meng Yao confesses her feelings and Junjie rejects them. But Meng Yao doesn’t accept his decision. Poor Guy, doesn’t know what to do with this girl?

He gets back home and his mother is waiting for him to have dinner. She talks to him about dating Meng Yao but he expresses his disinterest. She is understanding of his situation and I’m really looking forward to see how she will react when her son falls in love with Jiaming. She has made Junjie the same dumpling that Jiaming bought before and looking at them reminds him of Jiaming’s words.

The next day at work, Junjie finds the cake that Jiaming bought for him at his desk. To spite him, Jiaming got him a cake with a penis on the top. Surprisingly, Junjie laughs it off when he hears a commotion outside. It’s Jiaming’s ex-girlfriend Lucy Zhang creating a ruckus. Junjie tells her that Jiaming hasn’t arrived at work yet. When Lucy asks him how he knows that, Jiaming arrives and drops the bomb that Junjie is his boyfriend. He profusely apologizes to Junjie for all the trouble he has caused and seeks his help to get rid of his savage ex-girlfriend. They present a united front and somehow manage to fool Lucy.

Capture Lover is an attempt by Director Aria Lee to produce LGTBQ+ content in a country ridden with homophobic traits. The production was riddled with difficulties such as inadequate funding from the production company (J&M Fun Film & TV), and major casting issues. Despite all this, the show has been successfully launched on GagaOOLala and is being streamed worldwide except for China. I also read some tweets about some audiences complaining about the quality of production and the lead’s acting skills.
The storyline is certainly promising. I didn’t find any issues with the cinematography or costumes as such, so I don’t understand what all the hoopla is about. We have to understand that the team is working on a budget and doesn’t have abundant resources nor the flexibility permitted to dramas that portray straight romances or instead change gay romances to “Bromance.”
Han Jing Cheng, as Ying Jiaming is convincing. I won’t say that he is really good, but he isn’t bad either. Portraying the rich spoiled kid takes a certain amount of charm, and he possesses it. However, at times he falters, and I’m hoping his acting skills improve in the upcoming episodes.
On the other hand, Luigi Zhang breezes through his performance as Ding Junjie. You respect his authoritative demeanor, yet at the same time, feel sorry for him. Since these are just the initial episodes, I think we should definitely give this show a second chance.

I’m looking forward to watching the next episodes to see what kind of new trouble, Jiaming cooks up for Junjie!