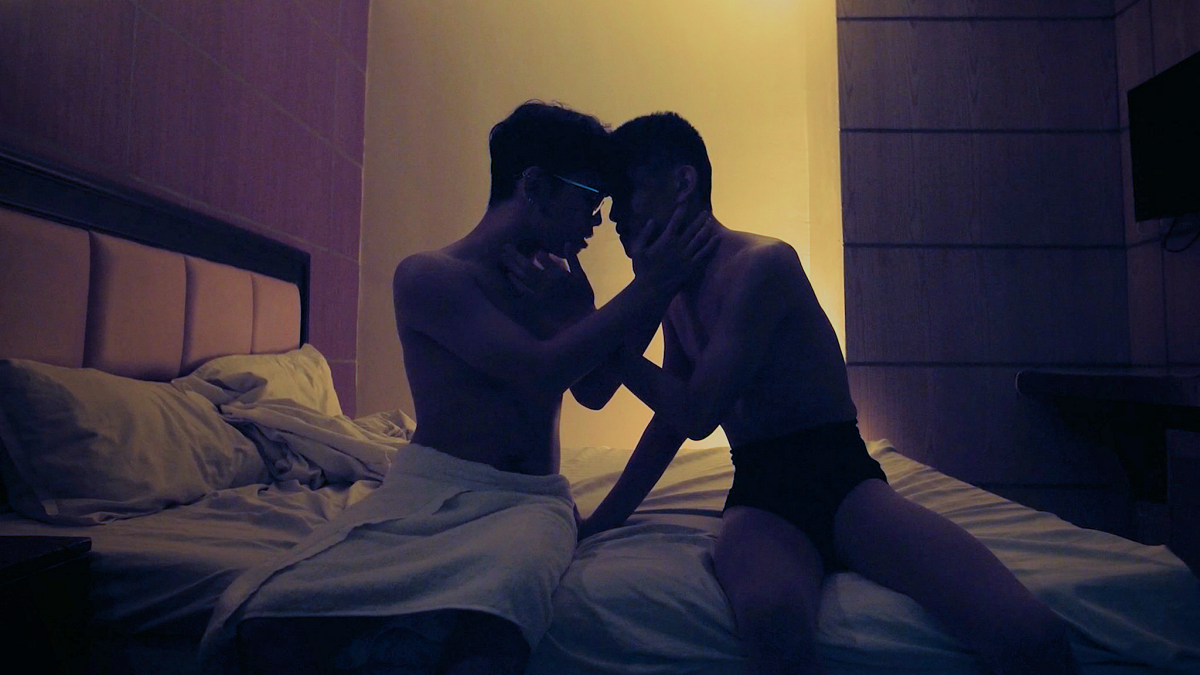 PLUS.MINUS (2020) and a Conversation with the Director, Lester Cristal

Director Lester Cristal is a graduating student of De La Salle-College of Saint Benilde under the Digital Filmmaking program (BenildeFilm). His queer-themed short film PLUS.MINUS is a finalist of this year’s CineMapúa. As the oldest-running student film festival in the Philippines, CineMapúa has become a platform to raise social awareness through film and showcase the talents of the student filmmakers.

PLUS.MINUS. is a portrayal of collective and shared LGBTQI+ experiences and is a presentation of an ecosystem in our community. It tells the story of what it means to love and be gay and live in this country during events in this wired world. The film is intended to transcend gender stereotypes and hopefully will open doors to a conversation about LGBTQI+ experiences, that has mostly been confined in the four corners of a motel room, kept underground with the local drag scene, and that can only be accessed through being incognito on the Internet.

Told in reverse chronological order, “PLUS.MINUS.” tells the story of Mark, an aspiring drag queen, and Alex, a guy he met online. Soon, the two find comfort in each other and create their own world out of desolated motel rooms. The movie stars Kyle Gopez & Russell Vingno in the major roles.

A Conversation With The Director

We had an opportunity to talk with Director Lester Cristal about his aspirations and the inspiration behind his movie “PLUS.MINUS”. Here’s what he had to say

How Film School Reclaims a Very Important Part of My Queer Life.

I was six when I woke up with the loud annoying laugh of my father and his friends in the military. I rolled out of bed and rubbed the sleep out of my eyes. I went down the stairs, and I saw my father’s head-turning red as they laugh so hard over the movie they were watching. I heard him saying, “utos ng direktor yan!” over and over again as he burst out. I have never seen my father that way; he has been the serious and disciplinary one. It was my first time seeing him showing such hyper emotions. Right there and then, I told myself that I was going to become a director, and I want to make people laugh too. Fast forward to today, I am pursuing that little dream. I’m taking on the industrial manufacture of anxiety and financial loss that no one bothered to tell me about before, which is filmmaking at De La Salle-College of Saint Benilde. Back when I was a frosh, I was just starting to embrace my queerness that I know I always had and am constantly looking for my voice as a filmmaker. I was so lucky that Benilde values diversity and inclusivity that creates a safe atmosphere for people like me, which is far different from home, where I have to conceal myself and be discreet. Benilde is one of the keys to my political, artistic, and sexual awakening. I remember we were tasked to stroll down to our memory lane and write our first experience of cinema. I wrote I was six when I woke up with the loud annoying laughs of my father and his friends in the military… over Dolphy, hailed as the King of Philippine Comedy, crossdressing and playing a comic stereotype of bakla – loud, decidedly effeminate, and sharp-tongued.

After I recalled how I was so fascinated at that moment by the muscular build of my father’s friends, I reassessed what kind of filmmaker I want to be. Films have always been a powerful medium in terms of influencing and educating people about certain topics and personal experiences. For decades, films about us have been oriented towards the stereotype and taste of predominantly heterosexual filmmakers and audiences, which includes my father. No one really took the time to really get to know us and to know our stories, not after the emergence of today’s queer cinema revolution, which I want to take part in. Benilde gives us creative freedom in the art and film we make. That’s why I was able to produce one of my first queer-themed short films, “Plus.Minus.” Told in reverse chronological order, it tells the story of an aspiring drag queen and a guy he met online who soon find comfort in each other and create their own world in desolate motel rooms. I went through a lot during the process of making the film. I still have emotional baggage from a break up back then, which I drew inspiration from in making this film. The initial concept was just about me and my ex and how we end up in a motel room to break up. However, as I was developing and producing this, I met diverse and amazing people from our community. That’s how drag, which is a manifestation of my femininity, and the culture of the online world of #alterph got incorporated into the film. After seeing the final outcome, I believe that it doesn’t just only speak about me, it’s no longer personal, it’s about and for the LGBTQI+ community as a whole. PLUS.MINUS. is a portrayal of collective and shared LGBTQI+ experiences. It’s a presentation of an ecosystem of our community and what it means to love and be gay and live in this country and this present wired world. I would not have been able to pull off such a production without the help of my blockmates and friends who were very open and collaborative. This production would not have been possible without the support and advice of my professor, Director Cholo Laurel, and without a proper platform that Benilde is continuously providing to its students. Together, we can reclaim our stories, our identities, and make people understand who we really are. I wish that someday my father will be able to watch the films I make and accept me for who I am. Until then, I will continue to master my craft, be the filmmaker I want to be, and surround myself with people who support and embrace me.