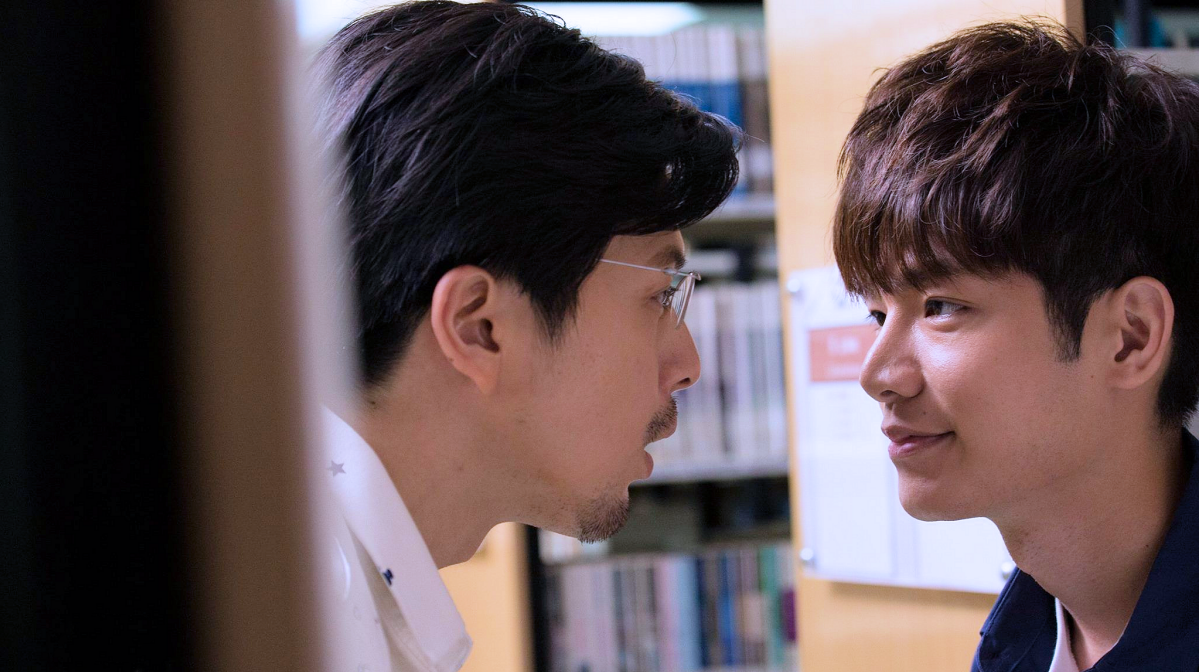 My introduction to the HIStory series was through Trapped, which is my favorite story in the web drama anthology created by Chang Ting-fei. “Right or Wrong” is one of the four-episode stories in the second season of this series, but the one that I watched the last. [And I regret judging it by the synopsis alone]

He wants to drag you into the sunlight to walk together; So you shouldn’t drag him into the darkness to hide

On paper, Right or Wrong screamed wrong on all levels to me – Age gap of 10+ years, Teacher – Student, Employer-employee dynamics, a married man with a child falling in love with a college student. Everything about this pair made me keep pushing this drama down my watchlist until one day, I reminded myself not to judge it by the looks of it. And it was such an eye-opener for me.

The story starts with little YoYo running into Fei Sheng Zhe (portrayed by Hang Zhang) and his friend while they are shooting in a park. She is scared by one of their colleagues, so they decide to drop her home. They find that the house is a dirty mess, things scattered everywhere, and in the middle of all this YoYo’s father, Shi Yi Je (played by Steven Jiang), sleeping on the floor without any care.  (Top score for bad parenting)

The next day, Xiao Fie finds that Shi Yi Je is the replacement teacher for one of his classes in college. Meanwhile, Xiao Fie has also taken up the job as YoYo’s caretaker. We see Shi Yi Je being absent from home and YoYo’s life, while Xiao Fie takes up more and more responsibilities for Shi Yi Je’s home and daughter. He is such a natural in taking care of the little girl and cooking that it is good to watch him in these scenes. So far, Xiao Fie gives off the impression of being a kind and caring person, but in the next scene, when he confronts Shi Yi Je on his parenting skills (or complete lack of them), we see a different side of him. He is not going to be quiet just because he is facing an elder who also happens to be his teacher or employer. He speaks his mind loud and clear because he is worried about YoYo.

The night when YoYo has to be admitted to the hospital urgently, Shi Yi Je is busy in his office and ignores calls from Xiao Fie. Later, when he turns up in the emergency room, Xiao Fie punches him and once again questions the kind of life YoYo has when her father is busy researching skeletons and ignoring her. [I totally love Xiao Fie now] Their fight is resolved when the nurse, Sister Juan, who is also Xiao Fie’s mother, comes to Shi Yi Je’s rescue. She and Shi Yi Je know each other from the past, and she comforts him when he is feeling guilty about YoYo. She also reveals to Shi Yi Je that as a kid, Xiao Fie was left alone for long hours, so he is very sensitive to YoYo’s situation, partially the reason he also accepted being her caretaker. Xiao Fie’s mother also tells Xio Fie that Shi Yi Je was orphaned as a child, but since none of his relatives were willing to take care of him, he ended up in an orphanage.

This incident makes Shi Yi Je reflect on his behavior after he takes YoYo home. Same time, Xiao Fie feels sorry for his harsh words to Shi Yi Je and visits him to apologize by delivering breakfast food for YoYo and him. Over dinner and a can of beer (only for Shi Yi Je), both seem to resolve their issues and thus begins the journey of their knowing each other better.

In a flashback, we see that the real reason Xiao Fie took the caretaker and later all-time cook role for Shi Yi Je is that Shi Yi Je had helped Xio Fie on one of his worst moment growing up and he had never forgotten that random meeting. That time Shi Yi Je had given him the lesson of not looking down at himself because of his sexuality or how others treated him.

Shi Yi Je also asks Xiao Fei to help him at his office and never misses a chance to tease him just to get a reaction out of him. It is amazing to see that the guys bond over YoYo – her school work, taking her out, attending to her at home, playing with her before they start having feelings for each other. They form a really beautiful family unit. Their flirting phase is quite fun to watch because of Shi Yi Je’s pranks and smugness.  It usually results in Xiao Fei trying to escape from these situations, and oh how hard he tries to stay away from him when he first admits to himself he is in love with Shi Yi Je.

Irrespective of the initial impressions of Shi Yi Je, one finds that when it comes to acting responsible, Shi Yi Je is very sorted and firm in his decisions. Maybe it is age, or his character is like that, but once again, he comforts Xio Fie when he wants to leave them, saying he will be a bad influence on YoYo. Shi Yi Je not just provides a safe space for Xiao Fie to be himself but also gives him the confidence to not run away from his love. He does not make any excuses for loving a guy on the lines of “I don’t like men, but only you.” His sexuality is open to viewer interpretation, and he chases Xiao Fie till he gets him to accept his feelings.

To prove his sincerity, Shi Yi Je even goes to Sister Juan and expresses his interest to be in a relationship with Xiao Fie (yes, that’s like a real man)  and agrees to her condition to not have any physical intimacy till Xiao Fie turns 20 which is tested so many times, but he sticks to his promise. (Others, please take lessons on age and consent appropriate intimacy) He only wants to keep his love close to him and have the joy of a family at last after first losing his parents and then having a broken marriage.  We have a very mature talk between Shi Yi Je and YoYo, where he tells YoYo that he will marry Xiao Fie and how two men are allowed to be together if they want. (Another Thumbs up for this show)

The last test for them is when Shi Yi Je’s wife wants to return to his life, but Shi Yi Je makes his stand clear to her and Xiao Fie. It is here that we see Xiao fie wavering in his love, and it hurts Shi Yi Je, which he tells to Xiao Fie. Thanks to his amazing best friend, Xiao Fie realizes his mistake, and when confronted by Shi Yi Je’s wife, he tells her that she is welcome as YoYo’s mother, but Shi Yi Je is off-limits (Finally).

We have more scenes of this family of three living together and having plans to even make it legal once Xiao Fie finished college, but before that, we have a 20th birthday celebration for Xiao Fie that he spends mostly in bed with Shi Yi Je 🙂

Apart from the dynamics of the central characters, we have an amazing ‘bestie’ who cares about Xio Fie’s mental health and isn’t shy about expressing her displeasure at his dependency or fears in the relationship. A single mother who realizes her mistakes but has managed to make Xiao Fie such a more mature, dependable, and kind person for all. Then we have the wife’s brother shutting her down when she expresses her displeasure on the relationship of the guys. He does not mind telling her that it was she who fled from responsibility and has no place to comment now.

If the story had left any scope to like the series any more, the actors nailed their roles to the T. Steven Jiang played almost his own age in the show and played all variations of Shi Yi Je perfectly. He was a devilish, charming, and loving lover, as well as a cool father to YoYo. More love to Hang Zhang, who was 27 when he did this role of a 19-20-year-old college guy. His partially confused, partially shy reactions as Xiao Fie were such a joy to watch. His reactions made me smile every time I saw these two together on screen, and their intimate scenes were so beautifully shot.

Not to forget, the girl who played the role of YoYo was so adorable and enjoyable to watch on screen. The friends and Xiao Fie’s mother contributed to their roles convincingly, and there was nothing that seemed off.

This story, in just four episodes, was perfection served on a platter. Everything about it was just right, nothing wrong at all. Watching this series is an absolute MUST watch BL show, and if you have not watched it yet, please fix that soon.