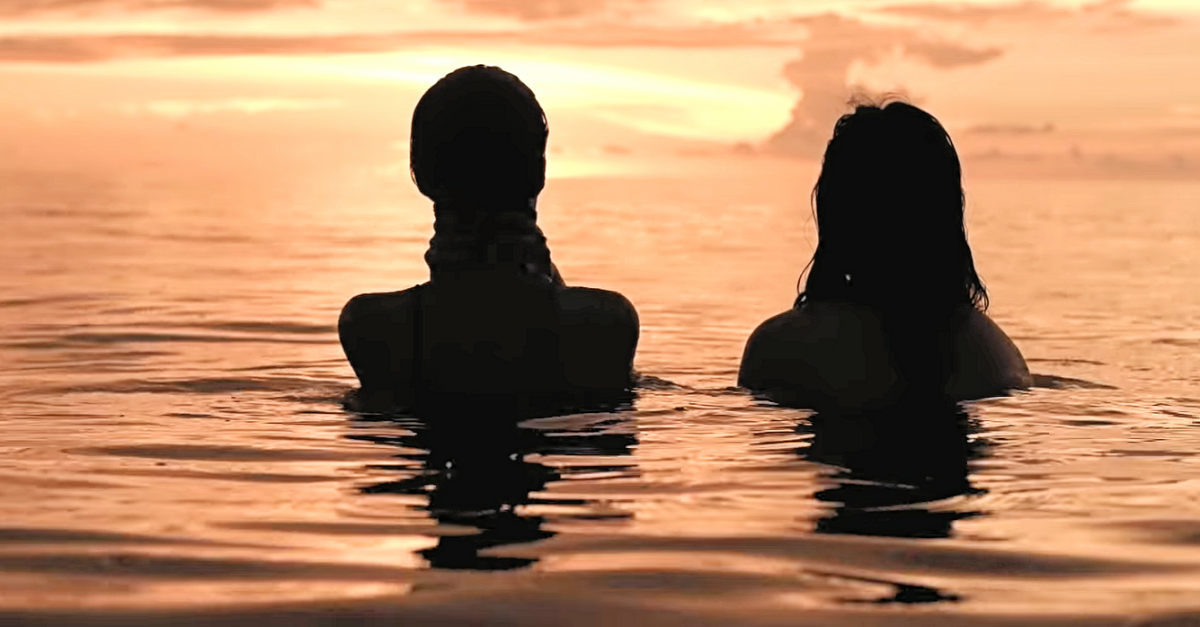 “With Me” The title of the third episode of Chasing Sunsets the Series resembles Lara’s invitation to Farrah to be part of her ‘chaotic’ life. For Farrah herself, the answer to that invitation was given long before she learned the truth about Lara. Since the day that their eyes met, Farrah has known that she would fall deeply for the girl with the broken smile. So when Lara asks her to be by her side, Farrah gladly accepts. However, life often gets way too complicated for both of them.

As they grow closer together, people start to get nosy; they come seeking the truth about their budding relationship. Ignoring other people’s questions might be easy for both of them. But what if the questions come from someone who holds a special place in their heart. What if the questions come from Dominic? What will Lara say to her long-time boyfriend? How would she describe her relationship with Farrah? Let’s find the answer together as the journey of Lara and Farrah continues to roll.

Farrah, promise me we’ll always watch the sunset together…..

The third episode begins with Farrah running to save Lara, who she believes is trying to drown herself in the sea. Unconcerned with the situation, Lara asks Farrah to remain calm as she only wanted to swim. Farrah is clearly annoyed at Lara’s response, but she tries to remain composed so as not to evoke Lara’s emotions. Cautiously, Farrah tries to approach Lara and embrace her in a warm hug; Farrah then pleads to Lara not to do that ever again as she is worried about her.

Moving forward, Lara and Farrah have become almost inseparable. They cling to each other and are seen spending most of their time together at the campsite, making Cheche, Farrah’s employee, curious about their relationship. Being questioned about their relationship, neither Lara nor Farah give an exact answer. Their intention is to be ambiguous so that Cheche will keep on guessing about their relationship status. However, one thing is very obvious; they are falling for each other. And as the sun slowly fades away into the ocean, they promise to become each other’s source of strength.

Although Lara enjoys Farrah’s presence, she is still unsure of her feelings. The idea of two girls falling in love with each other is somewhat new to her, which leaves her in doubt about her budding relationship with the campsite owner. Feeling conflicted, Lara seeks advice from her relative who tells her that there’s nothing wrong with a same-sex relationship. Thus, Lara shouldn’t be worried about other people’s opinions and focus on chasing her happiness.

Because love knows no gender, Lara.  And the most important thing is both of you love each other….

The next day, Lara is seen sitting alone at the campsite when Dominic approaches her. After being separated for quite some time, they rekindle their relationship by remembering the good old days. Both of them are carried away by nostalgia until Lara asks Dominic about their crumbling relationship. Dominic refuses to answer the questions by quickly changing the topic into Lara’s writings. While he reads aloud the poem to Lara, the latter breaks into tears. These tears are because the poem that Dominic is reading may symbolize Lara’s readiness to forget about the past and embark on a new journey.

The third episode also gives a closer look at King’s characters, who apparently just had his heart broken by his cheating boyfriend, Baste. Through their conversation, we acknowledge how toxic their relationship is and how the break up affected their current lives. After the call ends, King is seen crying his heart out. It seems like something bad has happened to him. Yet, the real reason behind his tears remains a mystery.

Going back to the campsite, we can see the main leads are having another bonfire night when Lara suddenly breaks down in tears.While Farrah tries to calm Lara, the latter confesses her true feelings for the campsite owner. Getting carried away by the situation, Farrah briefly kisses Lara’s lips. It seems like a perfect ending, but life is always full of surprises. As the night gets darker, the two love birds have yet another confrontation with Lara’s past, Dominic.

The writer of Chasing Sunsets The Series surely knows how to play with the viewers’ fragile hearts. Every episode of the series always feels like a roller-coaster ride to me; I feel happy seeing the lovey-dovey moments between the main leads, but right away, I feel shattered to pieces seeing them cry in each other’s embrace. Yet, I always come back for more.

It is indeed the honest portrayal of the struggle faced by the LGBTQ+ community that moved me in each episode of Chasing Sunsets The Series (which I also believe to be the main strength of the series). The opportunity to live closely with people in the community has helped the director to bring the story to life; he can accurately interpret the screenplay and give firm directions to the casts on how to personify the characters. On the other hand, the writer has repeatedly done a remarkable job in stitching together the scenes to create a coherent story that is enjoyable to follow. Combined with the strong performances by the cast members, Chasing Sunsets The Series offers a complete package to viewers who are not only looking for great stories but also satisfying acting.

Another thing that I like about the series is the consistent attempt to educate viewers about the LGBTQ+ community. In each episode, viewers are introduced to different individuals from the community and are offered with interactions between them and society. For me, this is a clever way to instill ideas in the viewers’ minds about tolerance and acceptance of the LGBTQ+ community. It also illustrates the beauty of living in harmony and mutual respect for one another. After all, we humans are social beings who, despite the differences we have, still need each other to survive the cruel world.

Moreover, the series also continuously shed light on mental health issues. Through Lara’s characters, viewers can gain more knowledge about the manifestation of mental health disorders, particularly on the sudden mood changes that characterized people with depression and anxiety. Along with it, the interaction between Lara and Farrah can help the viewers to become a better ally for those who are struggling with mental disorders. Hopefully, this will also debunk the myths and stigma about mental health issues that circulate in society.

On top of that, I always admire the way Chasing Sunsets the Series gives a raw portrayal of human life, not only the struggles but also the sweetness. It reminds me once more that there’s always someone that we can share with on the journey to chase our own sunsets.