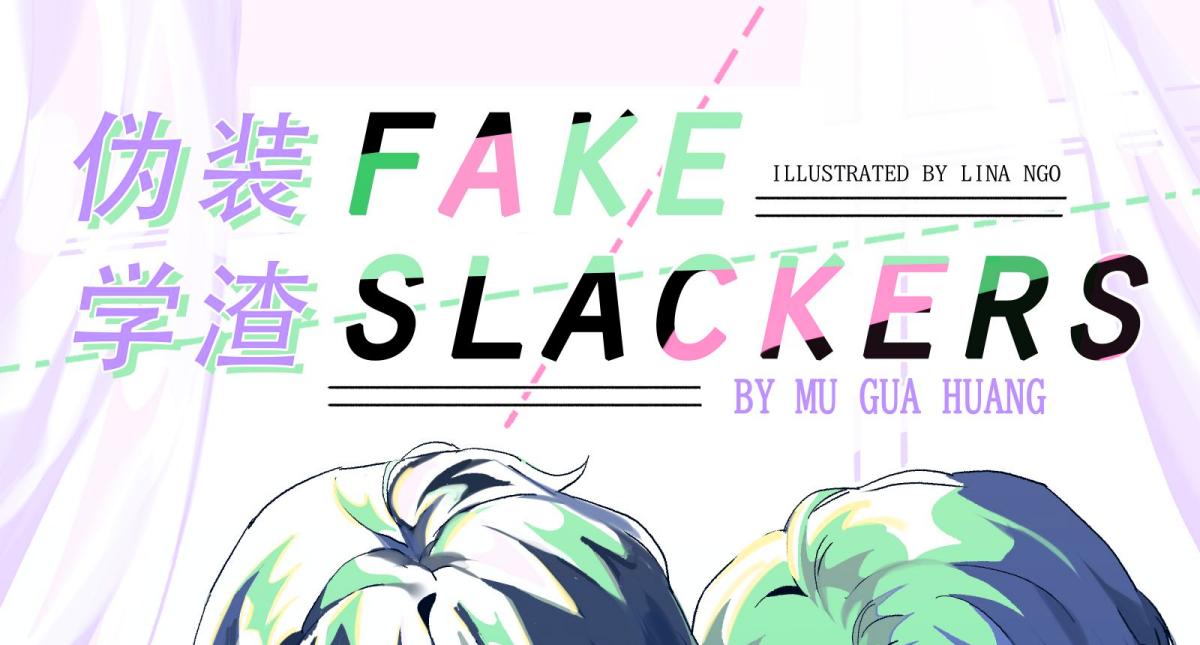 After class placements were decided, the school’s two infamous ‘problem youth’ not only shared the same class but the same desk. They’re clearly good at studies but pretend to be slackers. Faking their own lack of knowledge, from head to toe, they just keep meandering further down the path towards academic oblivion. Have you heard the grapevine about the two older students who always fight over the last place in class? This story is a serious comedy about the little matters of growing up and learning about yourself.

He Zhao called out to him again from behind. “Xie Yu.”

Xie Yu opened the door to his room, turned back, and leaned against the doorframe to look up at He Zhao. He Zhao wasn’t done and called his name again. Xie Yu was a little annoyed now and almost said, “Are you calling a spirit?”

He Zhao said, “Nothing. Just getting used to my boyfriend’s name.” These words sounded familiar as if Xie Yu had heard them somewhere before. Before he could react, He Zhao continued, “Let’s take care of each other in the future, boyfriend.”

The story begins with Xie Ye – a cool dude who can dominate minor thugs without leaving a trace of his actions to protect his godmother. However, he doesn’t like it when his mother is informed about what he does. Interestingly enough, Xie Ye used to be a brilliant student until one day he just stopped getting good grades in school anymore. Xie Ye is still close to his godmother and old neighborhood, much to his mother’s surprise and chagrin.

One day, Xie Ye is dragged into a fight, which starts because of one team stealing a virtual weapon from another team in one of the online games. There he meets “the Handsome Devil” who is good with words, stays out of the fights, and seems to enjoy everything and anything. Including getting picked by the police and made to write a reflective essay on his actions. Later this guy turns to be He Zhao, Xie Ye’s new deskmate for the new school year.

In one of the storylines, Xie Ye finds a game that is based on academic subjects and manages to push off the current top guy from his position resulting in fierce competition between both to manage the number one rank. Before they could have one last go at it, the app is shut down. So we definitely know now that Xie Ye is an almost genius student who works too hard to stay in the second last academic position in the school. It is quite interesting to see him take notes from the guy in the last position on how to maintain his act as a slacker in school.

Before they met, each one was supposed to be the tyrant of East & West buildings, respectively. They had not met each other, but their reputation preceded them in the entire school. Add to that the fact that they were competitors – for the last rank in class or even the entire school as well. So when chance brought them together in the same class, next to each other, people expected a huge showdown between them and were almost scared to be in the same class.

What actually happened was something no one would have imagined. While Xie Ye slept most of the time in the class, He Zhao played games like “Match the Outfit” or “Men’s Romance” and pestering his deskmate to help him make the right decisions so he could score high. Their banter and the fact that He Zhao was so shameless in his attempts to talk to Xie Ye was easily noticed by the two students who sat in front of them. Those two students soon realized that these two were not like the rumors about them; they were actually cute!

The class has some really unique characters – the persistent study rep who adds a new formula to his chat id so his classmate can learn it by looking at it all day. Then there is the gossip king who makes it his business to know everything about everyone, the class monitor, the tomboy girl, and the old homeroom teacher who prepares notes on how to lecture the students to study more. In one of the scenes, the teacher even talks to He Zhao’s best friend to know more about He Zhao and learns to play his fav game to teach him the value of studying. Together, these characters make for some of the most hilarious situations, which are heightened by reactions from Xie Ye & He Zhao – one acting indifferent yet aware, the other totally clueless but still a show-off.

Over time, He Zhao makes friends with most of the students in the class, as is his nature, and gradually along with He Zhao, it was assumed that Xie Ye would be included in most of the group activities as well. No matter how grumpy Xie Ye acted to everyone, He Zhao managed to keep Xie Ye in good light with others and even made sure Xie Ye was never troubled. Only a person like He Zhao could truly break the shield put up by Xie Ye around his heart and himself. In fact, Xie Ye was actually a bit concerned about and interested in what He Zhao did or thought. For the most part, Xie Ye is shocked by the kindness and care that He Zhao showers on him. Their progression from being indifferent to friends and later lovers took almost 90 percent of the story of Vol 1, but it was such a fun ride.

This book is a laugh riot. I highlighted so much of the dialogue and situations that kept me entertained late into the night for three consecutive days. However, the book is not only about the silly but fun scenes of the youths in the school. It also deals with some serious topics as it tells the reader the backstory of why He Zhao is so adamant to stick to his bottom academic position and waste his years. His ever-smiling face hides a much deeper pain that occasionally comes out as a bad temper. Most of the time, Xie Ye manages to keep him in line without realizing it. He Zhao doesn’t know much about Xie Ye’s story, but he makes him a better person already. But for now, none of the boys realize how similar they actually are to each other or what is truly in their hearts that stop them from showing their talents and hurts them constantly.

This book is a translation from the Chinese language, but one realizes it only when you read some idiom or dialogue that has a local reference. For most of the story, I forgot that the book was not originally written in English. I appreciate the translator & the publisher who have given much attention to making sure the translation is done well. This effort makes for an enjoyable experience for the readers. The slow-burn romance was so worth the confession scene and the scenes that follow when the boys start dating. This book is a pure fluff romance with not much angst. It is a perfect read for making the readers smile anytime you pick this one.

My only complaint from the book is that it has a second part that will come out as a book probably later in the year. If you want, you can read the remaining chapters of the story on the Chaleuria site by paying for the remaining chapters [I read a few more chapters towards the end, and I like the ending.] Vol 2 will have a few additional extra chapters also translated so I am excited to read it.

Chaleuria is a fully licensed novel site for your Boys Love/danmei/yaoi fix. There are a few other novels that are completely translated on the site. I recommend the site as I found the translations really good to read.