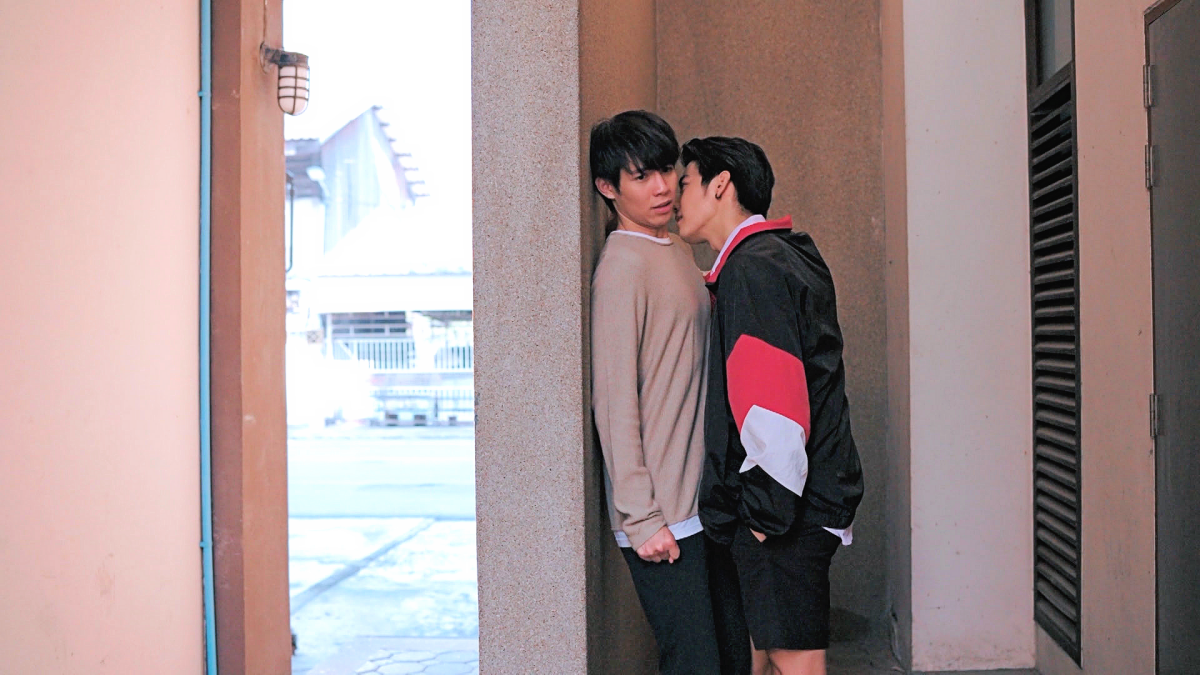 Episode 6 saw Soda shipping herself with P’Kim. Khet realizes he likes P’Kim even though they are brothers. P’Way even dumped his girlfriend so he could pursue his love for P’Kim. All of this because Pan is still in P’Kim’s body. Determined to fix this mess by getting her body back, KimPan goes to her body. However, KimPan is confronted by Soda, who acts on her misguided feelings for P’Kim and tries for a kiss. This is KimPan’s breaking point, and they shout their truth. Soda freezes as the Angel of Death descends with her scythe toward KimPan’s throat. And now The Shipper finally moves into a new story arc, but does it sink or will it swim?

Beginning right where Episode 6 ends with the scythe coming towards the throat of one of our mains, it freezes. Angel of Death commands KimPan to follow her out, and we have to suspend our disbelief on Soda just letting her go. Outside the hospital room, Angel of Death and KimPan discuss the secret being revealed. It’s funny how KimPan underestimates Soda’s intelligence as the scene bounces back and forth between them talking and Soda putting the obvious together. Finally, just as KimPan says Soda will never figure it out (Uh…you literally just told her…) Soda bursts out, declaring she totally gets it. Angel of Death brandishes her scythe, and KimPan hastily tries to undercut Soda. Giving up, they shove Soda back into the hospital room and close the door before KimPan is facing a pissed off Angel of Death.

Actually, Angel of Death isn’t able to take lives, and it was all just a bluff to keep God from finding out. KimPan and Soda have a moment of being Pan and Soda, and it’s nice to see Soda has her friend back. While Khet, who was hiding in the bathroom the entire time, is having a hard time wrapping his head around the fact Pan is P’Kim. You have to wonder why it’s taking him so long since when the show began, he has been the smart one. But to be fair, the whole first part has been pretty inconsistent with the rest of the show. He taxis home and see’s a YAOI novel on KimPan’s bookshelf and assumes it’s Pan’s. But KimPan hasn’t bought any YAOI, so it’s most likely P’Kim’s. KimPan and Soda say goodbye to their KimWay ship and decide it’s time to get Pan back to her body.

However, the showrunners don’t finish whatever KimPan was going to do because that would make sense…though I doubt KimPan knew what they were going to do.

Cut to Phingphing’s goons publishing all her dirty secrets on social media until Phingphing appears obviously angry that all hers are now online. Of course, she promises pain to whoever did it, and they scurry off. Then Soda and KimPan head to the library to research body switching. Of course, their sources are fictional books that all have the same answer, “Love.” Which again is too obvious for these two, so they hunt for the last book which Soda can’t reach it so KimPan goes for it. Cue a thirsty Soda staring at KimPan, and I’m just shaking my head at this girl. KimPan saves Soda from a falling book, Soda still wants that kiss, and after a yell, they are kicked out of the library. After an awkward Soda-still-crushing-hard-on-KimPan moment, the pair decide Pan needs a new love. And ironically, the next scene is Khet and P’Way meeting in the hall. Now, if that isn’t foreshadowing, I don’t know what is.

The two talk and Khet is curious as to why P’Way broke up with PhingPhing. P’Way answers the question by asking why KimPan isn’t at school. Khet doesn’t know either, and PWay tells Khet to tell KimPan to come to school. Khet shocks P’Way with a trip to BBQ that night. Could a new appropriate ship be growing (Hmmm)? Actors Ohm and Fluke have good comedic chemistry, as both play their roles well. Khet ignores P’Way’s insulting remarks, and they have a cute moment – a food war challenge, which P’Way finally loses. After winning, Khet asks P’Way about the break-up in a very subtle way mentioning the lock-screen photo on P’Way’s phone.  The editor then tosses in a shot of the phone with the lock-screen showing a very happy picture. After a long pause,  P’Way answers, “yes.”

Khet is happy KimPan came home but, for obvious reasons, is not sleeping in the same bed. Khet discovers Off (Pongpol, the bully is looking for P’Kim) is at the school on the hunt.  Off slams into P’Kim’s class hunting for him, and for whatever reason, the teacher seems to ignore the fact an expelled student on school premises and is threatening P’Way with violence. Lazy writing like this has been going on in this show for so long, it’s something I’m used too at this point. Khet rushes to warn KimPan, who either doesn’t pay attention to the phone or who knows? But they don’t see the message. KimPan meets with Soda, and again all signs point to Love as the way to do body switch. And that’s when Off appears for his revenge.

P’Way appears to save KimPan, and I remember they have not seen each other since KimPan was a jerk to him a while ago. After making short work of Off and his goons, P’Way grabs KimPan’s wrist and pulls them away as the campus guard calls for backup to attempt to arrest them. P’Way and KimPan run faster, and of course, they get away from the guard. At this point in the melee, KimPan is flustered to see P’Way, and it shows. However, an editing boo-boo or just plain bad continuity makes it appear that Soda has disappeared from this scene, leaving KimPan and P’Way standing in a tight alcove, breathing hard, high tension between them.

KimPan attempts to flee, but P’Way brings his leg up, bracing against the wall trapping them. Of course, P’Way is fully aware of what he’s doing when he leans into KimPan’s personal space, and it’s a well-acted scene of sexual tension. Fluke does amazingly well in this scene, having his character P’Way go from shy after being hurt by KimPan the last time they talked, to outright flirting with KimPan as he keeps his mouth a few inches from KimPan’s neck for the entire conversation. He watches the way KimPan reacts and finally walks away, telling KimPan to come back to school.  This leaves KimPan winded for obvious reasons, Soda suddenly reappears and comments on what just happened.

It’s revealed Khet is the one who called the guard to protect KimPan, and he finds their book on body switching. Soda finally gets KimPan to realize what P’Kim told her day one; that she is in love with P’Way. They agree to make it happen and finally return to Pan’s body. The goal is for KimPan to practice kissing the body and learn how to love. By accident, the kiss happens, and P’Kim’s body falls to the ground while Pan awakens as herself.

Lazy writing is the glue that holds this show together, which isn’t a good thing. All along, we as viewers have had to suspend our disbelief about a lot of things. But in this episode, it’s how the characters react to things that undercut the charm of the show. Put that besides the amazing acting and whip-smart one-liners, and you have a comedy that at times feels like it’s going off the rails, but always catches itself and comes back to some semblance of logic. Minor inconsistencies like names being used Off is Pongpol, for instance, might throw you off. But it’s all happening so fast it’s not too surprising you don’t know their names by now outside the main cast.

Seeing the interactions between KimPan and P’Way was the highlight of the show, not just cause of the romance but seeing the range of First and Fluke was amazing. The characters ignoring the obvious until the final moments is by now normal. However, the episode was fun, well-paced and enjoyable