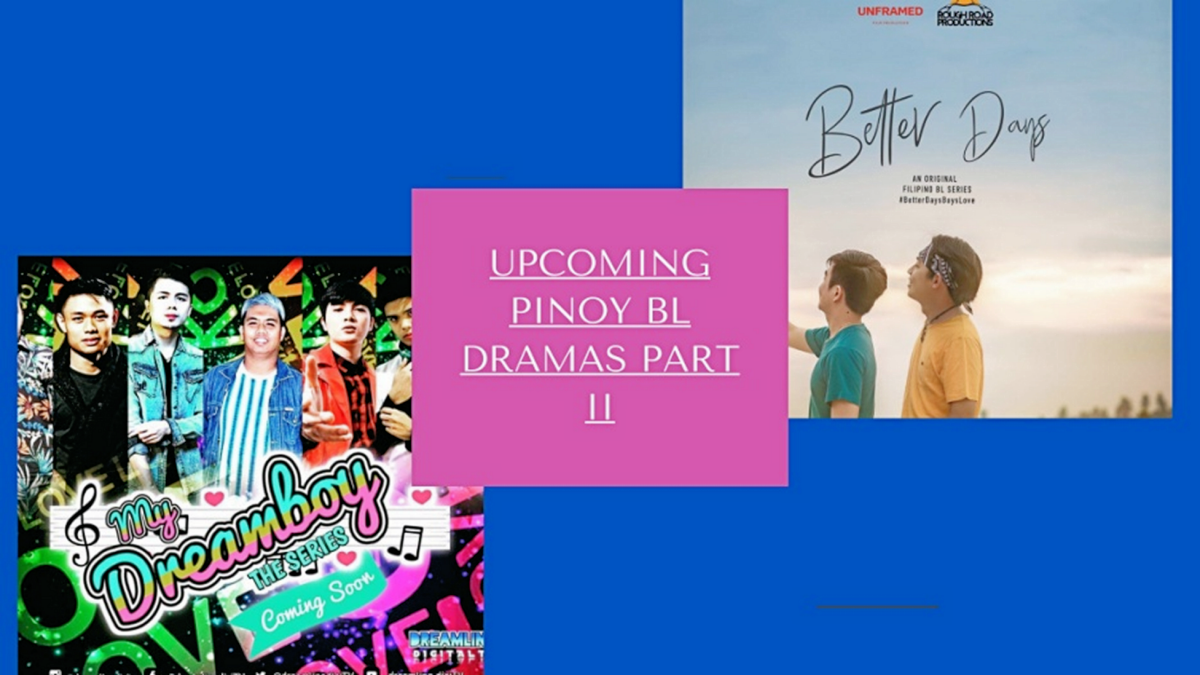 Pinoy BL dramas are fast broadening the BL genre into variations on a theme. While Thai Dramas seem to be stuck to the age-old concept of school romance between Engineering or Medical Faculty students, the Filipinos are more inclined to produce BL content with twists and turns. Adding the required gourmet flair to the search of a perfect BL drama is Unframed Film Production’s upcoming drama series “Better Days.” Teasing your taste buds with perfect gastronomic experience coupled with a romance between two of the most handsome vloggers, Better Days promises a “Change from the Norm.”

Dreamline Digital TV “My Dreamboy the Series” on the other hand takes us into the world of Dreams where the romance unfolds between perfect strangers. The distinction between reality and imagination is viable, which would certainly make for an interesting watch. With a multi-star ensemble, Dream Boys is certainly upping the anticipation factor.

Starring influencers-turned-actors Chesther Chua and Benedix Ramos, both new in the acting field, Better Days follows the colorful story of a vlogger and a chef and how food will play a pivotal role in igniting a spark in what seemed an honest relationship. Netizens may expect a lot of featured local delicacies in the series.

Sharing the story behind Better Days, writer-director Carlo Obispo, the genius mind behind Cinemalaya’ sPurok 7 (Zone 7) and 1-2-3, said, “When we brainstormed with my producer, about wanting to make a BL, we agreed that it should be inspirational. This show is inspired by our BL couple friends whose ‘Love is founded on ambitions, goals, and dreams and they achieve together.” Kristian Villaflor, Unframed Film’s Executive Producer, added, “we are offering love as a venue in fulfilling their individual dreams by growing together.” Lead stars Chesther and Benedix are both Youtube content creators with over 100,000 subscribers under their name.
Better Days is produced by Unframed Film Production and co-produced by Lovejohn Media Productions and Uncle Scott Global Productions in cooperation with Rough Road Productions.

Storyline
Aron is an aspiring Chef, while Kian wanted to be a part of the advertising industry and started a name for himself through vlogging.

Fueled by their personal goals, Aron and Kian go on a flavorful journey that also drew them closer and closer to each other.

You can have active interaction with the main leads of the show through Ticket2me’s YouTube channel, as shooting for the series has already started.

My Dream Boys The Series

Storyline
Joey Castillo (John Vitor) is a simple gay man studying Music Education at Dream University, whose only priority in his life is to lift his father and brother out of poverty. One day, Joey dreams that he was in a place with a stranger. Joey wondered who the stranger is, so he forces that person to face him. When the stranger turns around, Joey is faced with a very handsome guy and he called it his Dream Boy. But unfortunately, he wakes up and does not know the name of the mysterious man.

Joey’s father, Pete, has a big debt and is forcing him to pay. Joey talks to his father’s creditor to give them another chance. The Creditors pity them, so they are given a second chance for three months. Joey promises he will help his father pay. Meanwhile, it was Joey’s first day at Dream University. As he was walking, he was surprised when he finds that his dream boy lives near his house. That’s why Joey followed him and discovers that they are studying at the same university.

Joey is very happy when he figures the true identity of his dream boy. His name is Kenneth (Ariz Ravales), and he is the team captain of the basketball team at Dream University. He is also one of the most handsome scouts on the entire campus.
Further, Joey’s father asks for money from his friend Miggy Montenegro in exchange for his work. When Joey learns about this deal, he was very worried. So he convinces Miggy to let him work in place of his father. Miggy agrees to Joey’s condition and tasks him with the caretaker of his son. Joey is shocked when he finds that his future boss, Miggy Montenegro’s son, is Kenneth.

Will Joey will be happier because he will be with his Dream boy almost every day? Is it possible for Kenneth to fall in love with a dreamer like Joey? What if Kenneth’s girlfriend named Pretty enters the scene? What if Joey’s suitor, the president of music club Anton, also enters the scene? What if Joey realizes that the behavior he expects from his dream boy is the opposite of real life?
Be ready to fall in love with the BL musical series of the year “My Dreamboy the Series.”