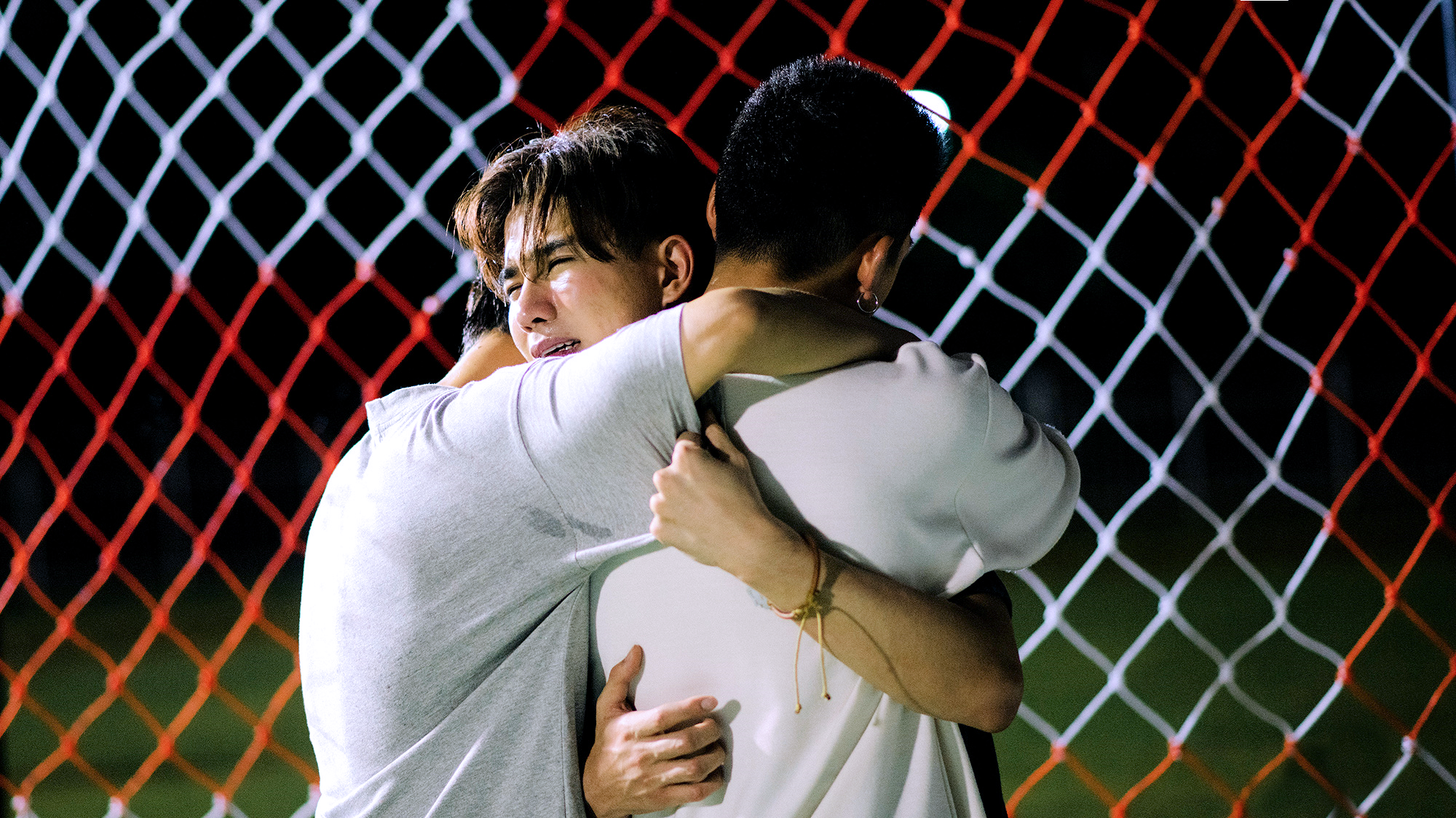 Still smarting from the kiss with Tin, Can is confused. Thinking about it constantly while everyone around him wonders if he’s crazy or in love. Meanwhile, Tin is continuing to deal with the mind games his family is playing with him. His solace comes from his own feelings of kissing that “dirty and cute” man. Ae’s spiral into drunken depression is hit with a wall of friendship and a well-aimed soccer ball. Finally, ending with a hilarious chance meeting at the mall. Love sometimes happens by chance.

The only way I can truly enjoy this is to pretend “Love by Chance” never happened. Which is very hard to do since the characters and actors who play them are from the same show. But with my mind focused on this reboot of the series, I can see how the show is building the archetype of a BL couple with the over-eager, small in size, but large in heart Uke. His partner is a taller, cold man who is often misunderstood by everyone but the submissive. This version of Can is a dichotomy of behaviors that don’t always exist well in the same episode and seem to flip on and off depending on who he is with.

He stares blankly while remembering the feel of Tin’s lips, seemingly curious about it. Then in a different scene, he is clearly dreaming of it. The way he is moaning, lips moving to the point the class he is in is paused as the teacher demands he is woken up. Is this the Can who enjoys the kiss? The other Can is needlessly antagonistic and loud. In a mid-scene, his actions towards Tin are in direct conflict with how he was before he saw him. This Can is self-righteous and judgmental right up to downright insulting.

Why? Because the way the scene is written is like a button being pressed. The stilted acting in the scene the moment Tin bumps into him is telling as the pair reenacts a scene from that show that shall not be named.

Word for word, they repeat those lines –

We want to see that Can is the Uke and Tin the Seme – the original pairing. But what made AePete work was how natural the two grew into their roles in the main couple of the show. What you have here is the show that shall not be named’s secondary couple, with the attendant secondary story arc and secondary character development suddenly being brought forth as the MAIN couple, with little thought behind the dialog.

Because of this, we are being led by the hand and spoonfed events through moments of their unique courtship. Like when Can spies on Tin being hit on by a beautiful classmate. Tin has no interest in the woman, and the way he explains this to Can is supposed to endear us to Tin. However, the way the dialogue is written took away the responsibility that I was supposed to figure out for myself. Moments like that occur over and over in the show where stating the obvious takes away any motivation to reach conclusions on my own, which was, by the way, one of the joys of (the show that shall not be named).

With Tin and Can, it is as if the director is bluntly driving what their roles are to each other and us. It got mildly annoying watching Can’s almost schizophrenic mood switches. It went from confrontation, letting Tin leave, then running in front of his car that is in motion, and then apologizing, and ending with acting like a 5-year-old begging for Tin’s forgiveness. All of that in the space of 5 minutes had my head spinning.

The real irony is they are only like that when together. Can is his usual whiny self around Techno, begging for food. Sitting alone and yelling about being hungry felt almost like a waste of time for Can. He literally sat alone, shouting it, then walked home bellyaching about being hungry for what purpose? What Mame intended for me as a viewer to derive from this almost child-like Can is beyond me. All I can think is there is no way this man-child can deliver the same speech filled with sincerity defending his friends to Tin and have it resonate with me.

Ae is such a conflicted character to me in this version of the series. On the one hand, losing the love of his life, causing him to go on a bender, makes sense. For that bender to last this long seems unbelievable to me. He was such a strong moral character before this. Why? Because he isn’t always a bitter drunk. In scenes where he is playing soccer, he is his normal (sober) competitive but fair self. If you want to write a drunk, miserable character, he has to stay that way. When his friends find him in another bar, it’s clear that Pond is out of his depth, but this new character isn’t having any of it.

I was riveted at how Mai grabs him and drags him to the soccer field for some tough love. It’s such a welcome change of pace for the episode watching a worried Pond as Mai pummels Ae with the soccer ball and talks sense to him. Seeing the fantastic acting here almost makes me forget Tin and Can entirely. Whether Ae is truly overreacting to his loss like a drunken ass remains to be seen, and I am curious what’s next for him.

Tul, okay, first of all, I love his character in this show because you have absolutely no idea what he is thinking. It’s clear he is doing something, and with each episode, he is less cryptic (Thank God!) because that was getting hella annoying. In his scenes with Tin, he presents himself as a concerned family member. I love the actor’s delivery of his lines as he owns the sly double entendres and his voice practically purrs with venom.

Tin isn’t having it and puts up a good front that he is unaffected, but when alone, he just looks haggard. Seeing Tul’s son is a testament to how good the writing in this show can be as you learn details about Tul if you’re paying attention. That said, it’s how this particular scene was shot. The lighting was off, the child actor was terrible, and I personally wondered if the editor just missed this scene as everything about it, even Tin’s make up looked odd. During most of the episode, he has golden skin, but for this scene, he is as white as a ghost, with bags under his eyes, and I don’t see why.

This was, in my opinion, the first actual sequel episode of “A Chance To Love.” It summoned the past with inconsistency and feigned sincerity but offered insight into the characters regardless.

Did I have to put blinders on to appreciate this alternate universe of Love By Mame?

Is it worth watching?