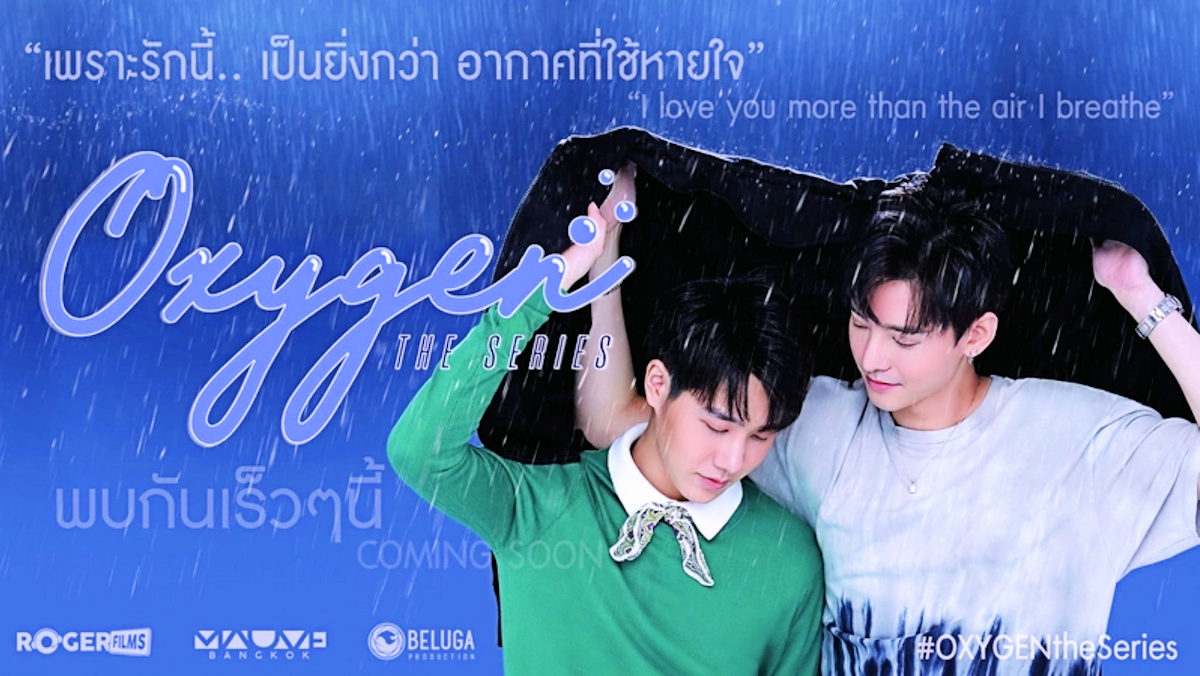 What happens when a boy who has forgotten how to smile meets a kindred soul with a warm smile? They would eventually walk the same paths, grow closer, and literally become each other’s “Oxygen.”

I will be very frank and admit that I haven’t read the translated version of “Oxygen.” So, I went into this show with zero expectations and returned with a huge smile on my face. I haven’t stopped smiling yet. The Pilot episode was sprinkled with adorable moments and lots of sweetness. Stocked with a fairly new star cast, the storyline would have fallen flat if it wasn’t for the right amount of affable chemistry between the three couples portrayed with an honesty that makes them so humane and relatable. It might be the “heart-stopping” first meeting of Gui and Solo or Kao’s sudden “Love Confession” to Phuri!

This review is a joint effort with Jenhg. See her thoughts on this episode at her blog. I’m sure you love reading her thought’s as much as I did.

Based on a popular novel by author Chesshire, “Oxygen the Series” is a rather beautiful journey of two young boys Gui and Solo, with an extremely different upbringing. Orphaned at a young age and working hard to earn for himself, Gui might find life challenging, but that doesn’t diminish his smile or his zeal. Solo, on the other hand, was born with a silver spoon in his mouth, and lacks for nothing, except for his smile. What happens when one night, their worlds collide over a cup of hot milk and warm smiles? Both the boys began to meet each other at the same spot until one day, they realize that they have become each other’s breath or rather a necessity? Like Oxygen!

Have you ever woken up from a nightmare, walked with unease on an unknown path, only to arrive in front of your destiny? Solo would know the feeling because bad dreams at night lead into a small coffee shop where he meets “The Boy with warm Smile- Gui.” They develop an unlikely understanding over a cup of warm milk as Solo comes out of his shell to get closer to Gui. While Solo finds his moments of solace with Gui, we have two other love stories that run parallel and are molded together to fulfill a beautiful timeline. Solo’s talkative best friend Kao’s and his elder brother Phuri are worlds apart. Their relationship should probably be listed under the “Complicated” tagline, and yet you can’t help but find them endearing. As we get over the shock of a sudden confession by Kao, we are stunned by the dynamics between our friendly doctors Petch and Perth, who are unanimously being shipped by a very nosy fujoshi.

Will Solo and Gui always stay cocooned in their happy world, or will someone rock the boat? Will the hot-tempered Phuri ever accept Kao’s affections? Will Petch ever realize the kind of effect he has on Perth?

My Opinion About the Pilot Episode

Have you ever met a stranger and felt a sudden pull towards them? So much so that you would go to any extent to spent some quiet moments in their company! “Oxygen The Series” is built on this simple yet intriguing premise. A chance meeting leads to camaraderie, companionship, and maybe more!

Solo and Gui’s first meet is absolutely on my list of “Top BL moments.” Solo’s nightmares seem to be insistent, and it’s obvious that the issues which plague him are very deep.

I’m not sure if he goes for a walk every time he suffers from a bad dream. But one night, while roaming around aimlessly, Solo chances upon a small coffee shop. He walks in seeking some company and becomes entranced with our other protagonist Gui. Although Solo doesn’t speak much, Gui is intuitive and pretty much figures out things on his own. That’s why instead of coffee, he offers Solo a warm cup of milk. I loved how Gui indirectly implies that warm milk helps to sleep better. He wants to help Solo but obviously can’t demand answers. So in his own caring way, Gui offers solace to the lost boy.

Now while Solo is quiet and doesn’t easily get along with everyone, his best friend Kao is a direct contrast. When he saves his apparent love interest Phuri while being chased by goons, Kao nonchalantly admits his feelings. Phuri is obviously shocked and has no idea what to do with this infuriating bundle of cuteness. I would have laughed at Kao’s silly inflections, but for some reason, this scene reminded me of Korn and In from UWMA. The similarities are so congruent. Kao is a wildfire like In while Phuri is hot-tempered like Korn. If opposites attract, then these two are the perfect examples for this relatable theory.

Solo and Gui’s second meeting is even more interesting. Gui guesses from the mass order he receives that warm milk was probably Solo’s choice. When he delivers the order during the freshmen orientation, Solo sits sulking in a corner. You wonder why the kid is mad until Gui approaches him. Solo demands his snacks, and it’s so obvious that what he wants is Gui’s attention. The poor kid is really lonely, and for some reason, Gui has become his ray of Sunshine. The head pat that he earns from Gui certainly seems like a reward. It’s hilarious to watch Solo bark at his friend not to touch his snacks and then stare longingly at Gui. He is pretty much a goner for Gui at this point. I love this simple chemistry between both of them, where they seem to have a silent conversation with their eyes.

While Solo and Gui are sharing sweet smiles, Kao, the insistent energetic puppy, is running circles around Phuri. I just love this guy simply because he is so refreshingly honest about his feelings. Kao doesn’t mince his words even when faced with an angry Phuri. They make such an intriguing pair that I want to sit and watch their story unfold. Kao is under no illusions when it comes to Phuri. Also, Phuri keeps deflecting; Kao stuns him into silence by pointing out the obvious “Dude, you won’t waste your time listening to me if you weren’t interested.” I’m guessing Phuri has never met anyone like Kao. So this is pretty much going to be a challenge that Phuri has never experienced. He seems to be the guy who barks orders, and people instantly fall in line. When Kao doesn’t, it confuses him. I’m going to enjoy this couple pretty much because they are a study in contrast.

That brings us to the next scene. I don’t understand how an over-talkative guy like Kao becomes friends with our brooding man Solo. But they seem very close, and, surprisingly, Kao doesn’t know that Phuri is Solo’s elder brother. Keeping up with his nature, Kao blurts out that he confessed to Phuri. Solo is shocked and pretty much warns him off. But our cute guy seems to be very smitten with “Mr. Hot Tempered.” It’s funny that Solo has no problems with the love confession. He only wants his best friend to stay far far away from his supposedly dangerous elder brother. I’m guessing the dynamics in this family are pretty screwed.

It’s time I address the main elephant in the room or the nosiest person in this universe. You guessed it right! Khim is beautiful and obnoxious. A die heart fujoshi who spends more time on broadcasting the lives of alleged BL couples from their cafe than actually working as a real barista!  You often wonder that if Gui didn’t exist, then who would run the coffee shop. Despite that, Khim slowly grows on you and is pretty enthusiastic. You learn to respect her audacious attitude and her zeal when it comes to being documenting “BL Love.” She pretty much twists Gui’s arm to get Solo’s pictures for her account. Although Gui isn’t comfortable, obviously you can’t refuse the diva. She gets what she wants. This girl is going to give the resident Thai fangirl Samantha Melanie Coates a run for her money!

Khim’s rabid broadcasts become an issue when her daily customers Dr.Petch and Dr. Perth, get shipped together. Although on the surface, they seem to be good friends, it is pretty much apparent that Petch has feelings for Perth that extend beyond plain friendship. The sudden spike in Petch’s heartbeat whenever Perth gets close to him is a strong testament to his feelings. They look so good together that I understand why Khim ships them together. Their reactions are pretty hilarious when rumors spread at their hospital, and nurses talk about trending the hashtag “PerthPetch.” Perth is, at the moment, quite oblivious to Petch’s affections. This relationship will be a slow study in progress.

When your thoughts keep spiraling around that one special person, time and tide couldn’t keep you apart. Solo and Gui miss out on their night rendezvous because of the late rehearsals. But Solo is not someone who would give up easily. So he spends his time waiting outside the coffee shop even though it’s quite late at night. Imagine my surprise when Gui turns up and drags him inside. Gui is pissed off at Solo for waiting outside despite the “Closed” sign. It’s funny because he is doing the same thing, and Solo enjoys the care. When Gui points out that he uses regular milk, Solo confesses that he can’t sleep unless he drinks the milk prepared by Gui.

At this moment, the warm milk is just an excuse for them. Gui remembers Khim’s warning and asks for a photograph, which leads to Solo kissing his cheek. I was pretty shocked at this development. I wasn’t expecting them to get so close this early. But I’m not complaining, because Solo and Gui make an adorable couple. The way Solo stares at Gui with stars in his eyes makes your heart ache. It’s like he draws comfort and peace from Gui, something that’s been missing in his life. I’m pretty much addicted at this point, and I’m going to follow their journey until the finale. What a journey that will be!

Psychomilk loves to bring you fresh content that would blow your mind. As such we have snippets from the Special Scenes of the Pilot Episode. While in the episode that aired online, Solo is seen kissing Gui on his cheek, the special scenes showcase him pecking Gui on the lips. This scene is on Roger Films Facebook page and is only available for their supporters. You need a VIP pass to watch these scenes or else you have to wait until they are broadcast on Mauve Series YouTube account three weeks later.

The cast of Oxygen The Series had their first official press meet on August 19th, 2020. Here are some pictures from the event where the actors interacted with the media and their fans.

Keep watching this space for further updates as we bring you more exciting news and features related to this sweet romance!