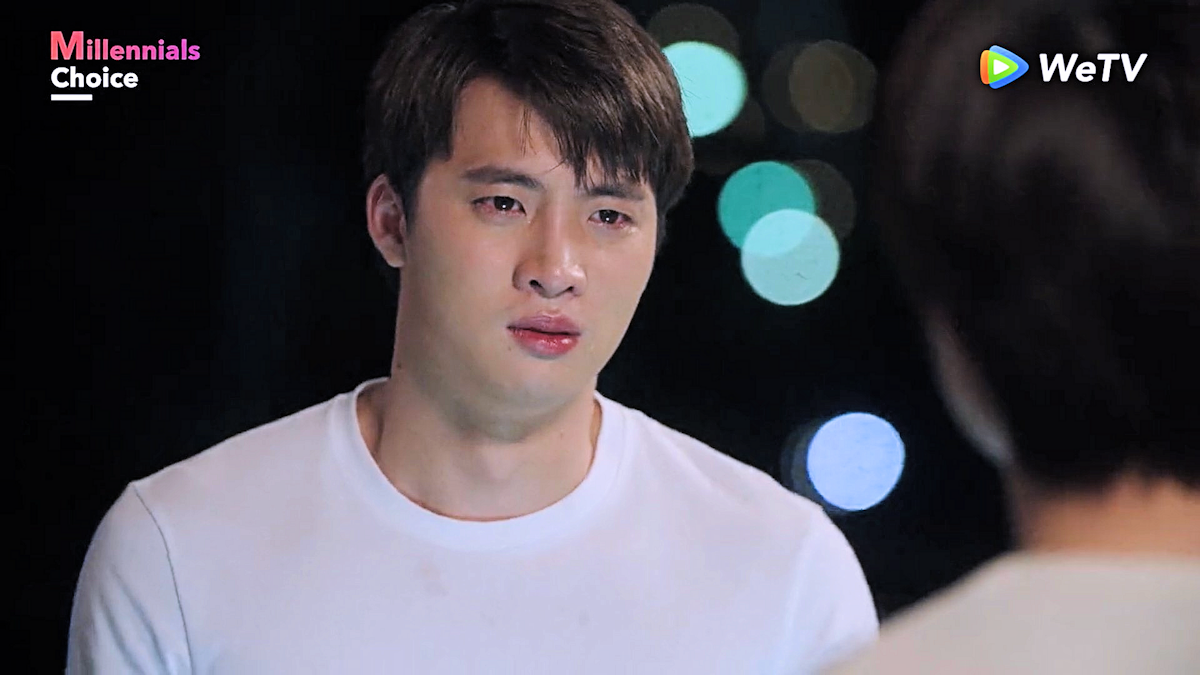 “We lie because we are adept at hiding the truth”- Anthony T. Hincks

The truth and our perception are two different things. While watching the current episode, I wonder how often people wear a mask and fake emotions. While some people are left with scars that stay hidden for a lifetime, others spend a lifetime, making sure that everyone around them is miserable. They are sadistic and want to stay at the top of their games. For such people, relationships and their loved ones often “play second fiddle” or are discarded as per their whim.

Tin’s unusual methods of courting spell disaster, and Can’s honest convictions leave Tin surprised as well as shocked. They are slowly growing closer, but certainly Can still has doubts of his own. While Tul seems to be a good father on the surface, his constant attempts to antagonize Tin finally materialize. Tin suffers from a major breakdown, and we finally get to witness how he was destroyed emotionally at the hands of his own brother. As we scratch the surface of Tul’s lies and deceptions, Can becomes the beacon of hope for Tin. Why did Tul destroy Tin’s life so callously? Will Can be able to win Tin’s trust and teach him how to love again? How is Hin related to the original series of events? Will Tin and Can’s fairly new relationship stand the test of time and tide?

Tin and Can have such contrasting personalities that it’s intriguing as they try to keep oil and vinegar mixed. Tin is so used to deceptive techniques that even a simple matter like “getting a phone number” becomes complicated. So, instead of returning Can’s phone and then asking for his number, Tin decides that breaking the old phone and offering a new one would score him major points in Can’s book. Obviously, he doesn’t understand Can’s character because the guy has been shouting from rooftops that he CANNOT be bought with money. I enjoyed this scene, simply because of Can’s steel-hearted conviction to correct Tin’s unruly behavior. Tin is so used to throwing money around that he doesn’t understand the significance of a simple word like “Sorry.” In the present generation, where kids rarely listen to their parents, it’s refreshing to watch Can reference his mother’s teachings. He might sound stupid or childish, but in this scene, Can certainly displayed a maturity beyond his age.

This entire scene might seem unrealistic but looking at it from Tin’s perspective certainly changes that perception. He is a lone character, and zealously avoids human contact. So obviously, he finds himself at odds when it comes to seeking Can’s attention. I can understand why Can was so surprised when Tin readily confesses about breaking the phone knowingly. But he certainly handles the situation in a better light instead of making pointless assumptions. I was afraid Can would explode again and get into his “You can’t buy me with money” tirades, but Tin’s helpless expressions somehow calm him down. It’s like he is finally beginning to understand and accept Tin’s odd behavior.

Can constantly manages to surprise Tin with his honesty, which is evident from how Tin smiles every time he is with Can. It could be the scene where he feels happy that Can was searching for him or when Can strongly suggests that he will pay him back for the new phone. Unlike others, who always seek favors from Tin, Can believes in equal footing, and that’s refreshing.

I’m enjoying the slow intimacy they are developing because even though Can doesn’t accept it yet, Tin’s presence certainly affects him or rather makes his heart flutter. Tin is quite steadfast when he decides on a track or method to take. It’s unlikely that he would let others boss him around, but Can is the exception to the rule. So instead of buying him expensive stuff, Tin reverts to the old adage, “The way to a man’s heart is through his stomach.” It certainly works for a “foodie” like Can, and the stolen kisses are just an added advantage.

Kengkla and Techno are still at odds, and I’m unsure how long the author will drag out this issue. I KNOW that rape is an originally YAOI trope, but I don’t have to like it. As BLs evolve from their YAOI roots, I’m hoping that such tropes are no longer used as plot devices. At this point, it is clear Techno is still at odds with revealing his true feelings to either Kengkla or his friends. I hope showrunners give us a solid storyline where Kengkla apologizes, and Techno accepts his own true feelings.

While we are talking about character development, how can we miss out on Tul? Tul Medthanan is handsome, intriguing, and mysterious. He carries an aura of a confident guy with subtle hints of arrogance. He is someone who holds the cards very close to the vest. He gives out the vibes of a caring brother and a doting father, yet he is unpredictable and strikes like a viper as well. The current episode was poised to reveal major cracks in this mask that Tul wears a little too well. As he recounts the story of “two brothers” to his son, and we are given a rehash of his childhood memories with Tin, we get to understand his character. Meen Nichakoon is certainly a good actor because he holds his own when paired in an altercation with an experienced actor like Mean Phiravich. Before Tin enters the scene, you can actually feel Tul’s remorse, but as soon as he sees Tin, it’s like a switch is flicked. It’s fairly obvious that his disguised comments are just an attempt to provoke Tin. He tries to get attention from Tin while the latter chooses just to ignore him. But there is a limit to everything, and Tin loses his control. I’m afraid that if Phupha weren’t there, the situation would have been worse.

I really want to understand why Tul’s character is so volatile. I have a hard time trying to connect the two sides he presents. On the one hand, he is a very doting father, but on the other hand, he keeps badgering or belittling Tin. It’s like Tul has spent his entire lifetime building on Tin’s insecurities. Why would he do that to someone who loved and trusted him so unconditionally? Doesn’t he feel sorry for the little boy he fed lies and then destroyed his trust and reputation? At times, I feel that maybe he provokes Tin to get a beating and find some redemption in the act. Or is it just another plot to convict Tin and ostracize him forever? With Tul, you can’t know that his inner thoughts are so insidious that they cannot be reconciled or accepted by anyone easily. I’m guessing the only person who’s accepted Tul’s true nature is Hin. Although Tul is married with a kid, he still harbors strong feelings for Hin. Their Master-Servant relationship is a disguise for something deeper along the lines of rabid BDSM.

That brings us to the penultimate scene. I literally cried for the lost little boy who has grown up to be so anti-social and dismissive. No wonder Tin doesn’t trust anyone easily. His entire life has been scripted by his elder brother, someone he used to worship. To realize that said brother fed his mind with hatred against their parents or intentionally got arrested on drug abuse charges must have been heartbreaking. I truly felt and understood his pain. We have to appreciate Mean Phiravich’s improved acting here because he is far better in this portrayal of Tin than in the previous season of LBC. While Tin in Season 1 was majorly portrayed as an exceedingly arrogant spoiled kid, Mean has managed to soften the edges in Season 2. He evokes deep-set emotions that make this character more humane and relatable. It’s a pleasure to watch him embody Tin’s pain and resentment.  You are witness to his helplessness as he pours his heart out and wishes that Can would trust him. He’s faced major rejection and hatred in the past, and the wounds are still fresh. So, when Can offers to beat his brother, it seems like Tin has finally found someone who trusts him.

This scene will forever be my favorite, simply because of the new trust that Tin and Can seemed to have established. Tin breaks down and hugs Can because unlike everyone else, Can doesn’t question Tin’s motivations or his truth. He trusts Tin’s words and believes him. Such a small gesture but with a significant meaning. In a world where his own parents discarded him, and his brother schemed to destroy him, there is finally someone who worries and cares about him. The naked desire to belong to someone is obvious on Tin’s face, and Can offers him the support that Tin wants, no questions asked. Quite a major improvement in Can’s wayward and otherwise clumsy behavior. Plan Rathanavit certainly stole the limelight with his loud redress of Tin’s abhorrent attitude as well as now, his calming support in the aftermath of Tin’s breakdown.

Next week’s preview seems interesting because Tin and Can will finally meet Tul’s son. Will it be a major rehash from the last season, or will this scene be shown in a new light? Also, Tul will probably get a clue about Can from his son, and I’m already afraid of the consequences. Will he do something foolish to separate our lovebirds? Meanwhile, where is Hin exactly, and how did he get separated from Tul?