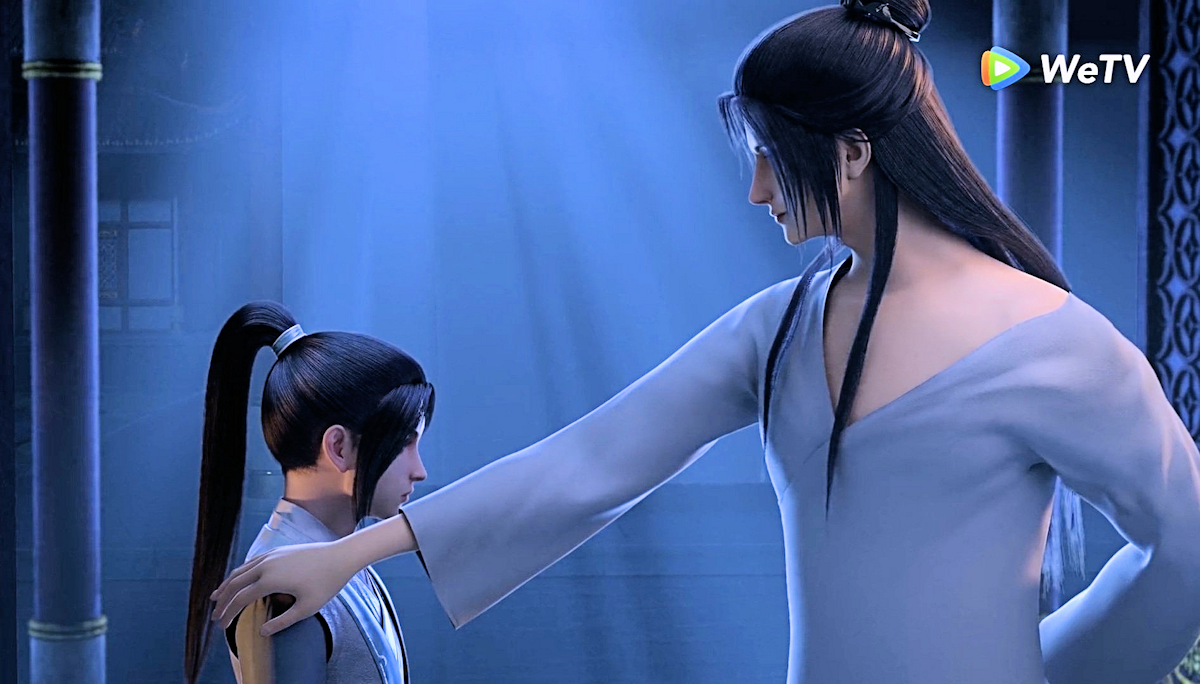 Scumbag System establishes a fast precedent to the changing dynamics between the Master-Disciple relationship as Shizun Shen Qingqiu (who is our transmigrating hero Shen Yuan) solves the Skinner Quest returns to the Qingjing Peak. The altercation with the Demon who poses and prances around is hilarious, as our hero tries hard to get his bearings straight in this ridiculous alternate reality. It isn’t an easy task because Luo Binghe’s innocence and sweetness make him feel guilty time and again. The divide in their social structure is fast diminishing, and Shen Yuan’s relationship with Luo Binghe is taking a better turn. As Shen Yuan sets out to right the wrongs of his predecessor and become the ideal Master (that Shen Qingqiu wasn’t), he suffers from major setbacks. The troll system’s unpredictable nature makes him cautious, but certain decisions cannot be delayed and certainly not when his “Life is on the Line.”

The unruly Peak Master, Shen Qingqiu (Shen Yuan), wakes up to find himself half-naked and bound. As he tries to understand how the Demon “Skinner” managed to defeat him, Shen Yuan gets the shock of his life when the killer’s true identity is revealed. Trying to stay in character proves difficult, as Shen Yuan tries to barter wittingly with the seemingly stupid Demon. Bound by the troll system’s difficult rules, Shen Yuan is forced to make an unexpected decision that puts Luo Binghe’s life on the line. However, the risk pays off, and both the Master-Disciple duo manage to save the day. Coming back to the Qingjing Peak, Shen Yuan seeks to undo the damage that the arrogant Shen Qingqiu caused because of his misconduct. As Shen Yuan decides to meditate to increase his powers, he has a shocking encounter with someone from the past.

The episode starts on a funny note as Shen Yuan wakes to find himself half-naked and tied to a pole. His apparent embarrassment on being defeated by the Demon in front of Luo Binghe is equal parts adorable and cliché. Shen Yuan never fails to stress that he is wearing a disguise and is a millennial. His constant murmuring and bickering with the troll system, as he tries to circumnavigate in this new reality, is relatable yet hilarious. While he is lamenting on being kidnapped and stripped by the Skinner, Shen Yuan is on edge when Luo Binghe and Ying Ying keep glancing at him helplessly. His evil glares to Luo Binghe have the desired effect, although the poor kid can’t stop but steal a glance. He is completely besotted with his Shizun. I understand Luo Binghe’s situation; it is impossible to resist the temptation of the handsome yet seductive Qingjing Peak Master. The adoration and devotion are fast turning into an attraction for Luo Binghe.

The situation turns eerie with the entry of the evil Demon. I love how she prances around sounding so mysterious, and it takes all of 2 seconds for Shen Yuan to guess that the Skinner is actually Die Er. Shen Yuan might be a millennial and not an actual Peak Master in reality, but he has read the book and understands the story’s intricacies. I’m not sure if he has read the part about the Skinner and merely recollects, or he is truly brilliant. But the fact remains that he uses Die Er’s vain nature and stupidity to his advantage. He coolly provokes her and gets the requisite information. This guy could very well be in the Police Force. Although he tempers his doubts, Shen Yuan mistakenly gives out that he will make a better scapegoat (I literally slammed my head on my tabletop). Shen Yuan definitely needs a mouth filter; he literally doesn’t know when to stop talking. As the situation grows dire, he throws Luo Binghe under the bus because of his “Invincibility” status. I was kind of miffed when he did that, but his underhanded tactics work, and finally, both Master & Disciple successfully defeat the silly Demon (literally because I can’t believe that such a stupid villain exists in any universe.)

I enjoyed their interaction in the events of this altercation. Although Shen Yuan made him the scapegoat and could have been killed, Luo Binghe didn’t harbor any hard feelings against his Shizun. I’m in awe of this kid because he has the ability to forgive easily, and his utter devotion towards Shen Qingqiu is unparalleled. His feelings are still in the infant stage, and it’s simply adorable or blind faith. Shen Yuan acts “Out of Character” when he apologizes for putting Luo Binghe’s life at risk, and since the “OCC” feature has been unlocked, the new control he commands is such a welcome change. I’m glad that the troll system won’t be able to disturb their romance anymore. At the same time, Shen Yuan works zealously to undo the unnecessary damage that Luo Binghe’s incurred at Shen Qingqiu’s hands. It’s utterly heartwarming as Shen Yuan promises to protect Luo Binghe (although he spoils the moment with his internal  monologue *sigh*)

As he is self-appreciating his gallant deeds with the new allocation points according to his latest victory, both Shen Yuan and Luo Binghe have an adorable moment when Binghe brings his clothes. It’s hilarious how Shen Yuan has almost forgotten that he is half-naked, and his bashful attitude suddenly turns to embarrassment. I’m enjoying these quiet instances where Luo Binghe shows his obedience, and Shen Yuan is left wondering why Binghe is so subservient. There is a hint of annoyance clubbed with adoration in the way Shen Yuan looks at Binghe, and it is absolutely endearing.

Senior Yua Qing Yuan is another dynamic that I fail to understand. Is his sole purpose of existence to be a “Quest giving NPC.” He seems to be too close to Shen Qingqiu, and Shen Yuan seems uncomfortable with this possibility. He makes a sudden decision to meditate in the Lingxi Caves for three years. He does so, thinking about his inability to protect Luo Binghe seems to betray his emotions. Shen Yuan is in a classic bit of “denial.” He has the hots for Luo Binghe, and he does everything to protect Binghe. Yet, Shen Yuan seemingly believes that whatever he does is to protect himself in this alternate reality. Also, Luo Binghe’s hurt reaction to this declaration is a testament to his true feelings.

As he prepares to leave, Shen Yuan shows his generosity by handing out the real manual to Luo Binghe. This scene would be romantic if Shen Yuan weren’t trying hard to score some points in Luo Binghe’s good books. Although all his attempts are carefully aimed at protecting his future self, to Luo Binghe, it seems like affection. The way he holds the new manual close to his heart and appreciates the fact that his Shizun made it, especially for him, will leave you wounded. Orphaned at a young age, all he seeks is some love and care. He has placed Shen Qingqiu on a pedestal and worships him. I’m afraid of future events, but I trust Shen Yuan in his decisions. I’m hoping he won’t imitate the original Shen Qingqiu’s disastrous mistakes.

That brings us to the cliffhanger ending to this episode. I’m not sure if Shen Yuan is really going to meditate or just go through the motions. Does reading a book give you all kinds of information on cultivation techniques because he is so on par with Shen Qingqiu cultivation levels that his knowledge seems astounding. As he meditates, his concentration is broken by an unknown entity, and we are left shocked.

Whose sword is stuck in the cave walls? Why is it disturbing Shen Yuan? What is the other disturbing entity doing in the Lingxi Caves? How will Shen Yuan handle this situation?
Keep watching this space as we bring further updates from this intriguing Donghua!