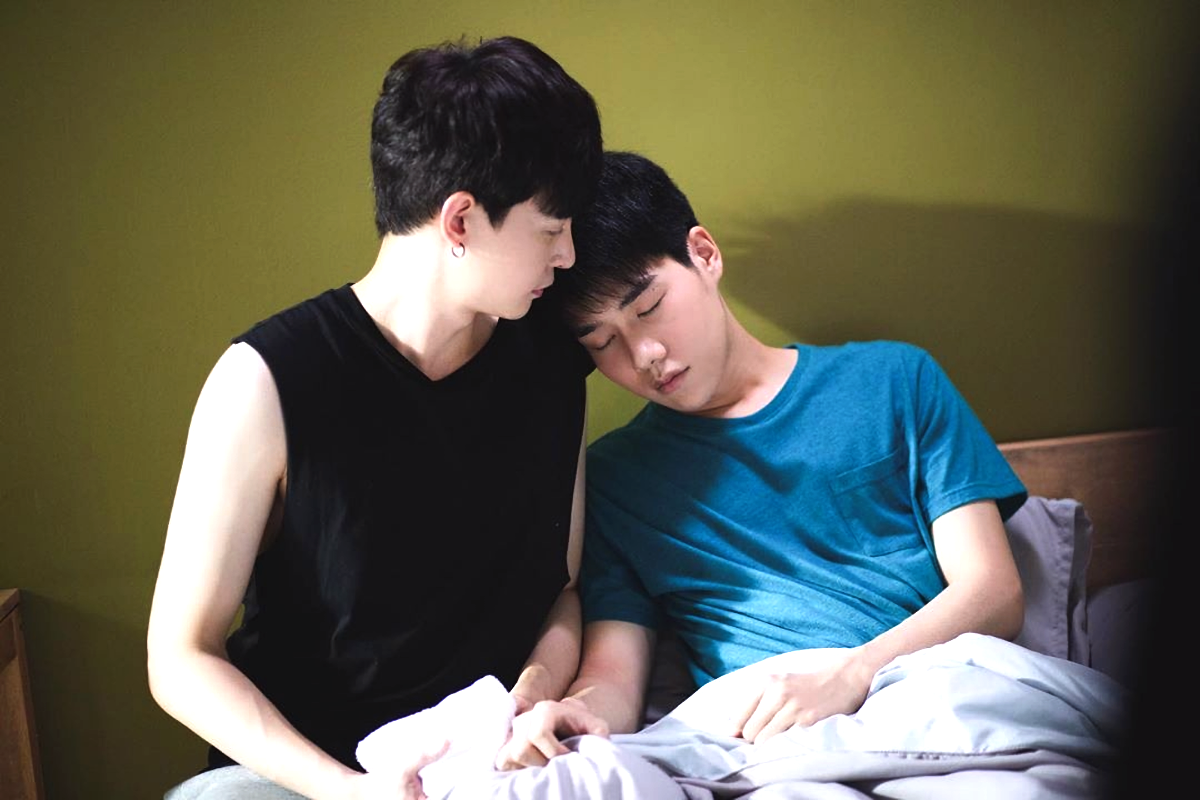 This episode served as an answer to quite a lot of prudent questions that had been looming over the horizon. Solo and Gui’s return to the farm bought a fresh perspective about the School’s affairs and also shed light on little adorable “Moon’s” problems. Big Mama possibly sent her son to make sure that Moon isn’t left alone, but how this relationship will work with Solo in the picture is a huge question mark. Phuri and Kao, on the other hand, are making strides in their relationship, and we get the revelations about Phu’s brother Pham. The absurd love triangle involving our young doctors and the siblings is getting more bizarre day by day. As Petch makes efforts to get closer to Khim, Khem is the one getting inadvertently hooked up.

This review is a joint effort with my dear friend, Jenhg. You can see her thoughts on these episodes on her blog. Each week, there is a build-up of emotions and anticipation as we ponder over our opinions’ similarities and differences! Let’s see what we feel about this one!

Solo is trying hard to take care of Gui and decides to take Gui to Big Mama’s farm to keep his promise. Once there, they learn about the vacant teacher’s position and, along with Kao, decide to help the children while they are on a break. We get to meet the adorable “Moon,” who was very close to Big Mama. As Gui digs deeper, he comes across some truths that will lead to major decisions regarding Moon’s future. Phuri arrives at the farm, and finally, our couples are together. Both of them decide to walk to the river but end up getting lost. However, this gives Kao the perfect opportunity to learn more about Pham, and the reveal is shocking. Petch is trying odd tricks to get closer to the oblivious Khim, but his efforts tend to lead Khem to the wrong conclusions instead.

It’s nice to have someone when you are grieving and certainly not on the state to take care of yourself. Gui is suffering, and I’m guessing the only silver lining right now is Solo’s presence. I love their comfortable relationship, and there is something soothing about the way they interact with each other. Solo wants to make good on his promise to Big Mama and suggests that they visit the farm. I’m guessing he wants a change of scenery so that Gui can dwell on something else. Even his threats are adorable, and I was like, “please go ahead and kiss.” But Solo is a gentleman, and since Gui is going through a tough time, he will stand by in silent support. Arriving at the farm makes our sweet couple realize that many issues are plaguing the School. They realize that Big Mama has left behind some unfinished business and the most important issue, “Moon.” Unfortunately, the kid gets on the wrong side of Solo, and their interactions are hilarious. As Kao joins the duo and learns about the teacher’s vacancy, he suggests helping out for their two-week vacation. The bunny seems lost (Someone get Phuri ASAP)

Moon intrigues Gui; maybe he sees himself in the little kid. Although Moon didn’t want to initially interact with them, it’s very difficult to stay angry at the “smiling guy.” He nicknames Gui as “Teacher Smiley,” Solo as “Teacher Handsome,” and Kao as “Teacher Bunny” (laughed my ass off). The first day involves Gui giving lessons on planting saplings. The way he interacts with the kids makes him so endearing. Especially watching him tease and prod at Solo is sweet; this is one couple that always makes me smile. While tagging his sapling, Moon uses two tags, and Gui questions the same. Moon explains the situation about his Mother, and for some reason, I feel that Big Mama has been keeping things for the kid. Gui and Solo feel sorry, and I’m guessing this kid will soon become a part of their life.

Kao is feeling insecure or questioning his actions. I never thought that I would see the day when our confident bunny questions his own actions. He has a heart-to-heart conversation with Solo and expresses his worries. I have the same doubts because Phuri isn’t an easy person to handle. Both of them have different personalities; one is an introvert and the other extrovert. Kao doesn’t know when to stop talking, and Phuri doesn’t like to talk much. Breaking through Phuri’s tough walls seems like a difficult job, and I often question Kao’s sanity, but if there is one person who can make the Phuri bend to his will, it has to be Kao. I was wondering if Phuri would come to the farm, and to no surprise, he does. Kao hides behind Phuri, thinking he will defend him, only to be pushed forward by his not-savior. But the shock on Kao’s face when Phuri comes to the farm is worth all the pain. Even Phuri calling him “Crazy Bunny” seems so affectionate now, and I’m a sucker for this romance.

Now that Phuri has arrived, the couples have dinner together. It seems more like a competition with Solo and Kao taking turns to pile food on their respective partner’s plates. The only difference is that Gui returns Solo’s affections while Phuri is an unspoken quantity. The way he suddenly rushes out to handle a phone call might seem rude because Kao’s face turns sour. But despite that, Kao only worries about him instead. Kao is a forgiving person, and that is the main reason for keeping this relationship alive. He repeats his concerns about annoying Phuri, who later himself helps Kao put his worries to rest. I love those moments where we get to see Phuri smile, and Kao enjoys them too. The scene again turns funny when Solo and Gui are watching this romance, and Solo mockingly teases Gui in the same manner. I love their friendship, as well.

Moon is searching Big Mama’s cupboard, and Solo catches him in the act. The Teacher Assistant finally divulges the information about Moon’s Mother abandoning him. Big Mama had been writing him those letters herself, and they seem to be very important to the little kid. As Gui goes through the letters, he recognizes Big Mama’s handwriting, and yet again, they are left with unanswered questions. Since Big Mama is dead and Moon is unaware of the situation, it would be difficult to explain to the kid that he has again lost his Mother. The next morning, Gui asks the students to draw their dreams, and Moon’s drawing surprises him. While other kids draw their future ambition, Moons draws himself with Big Mama.

Kao plans to spend some quiet time with Phuri, but they get lost in the forest. As Phuri laments about calling his brother, Kao apologizes, and they somehow manage to reach the waterfall. Kao needles Phuri about his feelings, and Phuri never gives him a straight answer. It might seem annoying, but clearly, Kao is unfazed and will never stop trying. The fact that he brought a tent and a thousand other things in that red bag of his is a clear indicator that he wanted to spend some quiet time with Phuri. I’m still laughing at how he just keeps taking out things from his bag, and I wondered if we’re watching a tribute to Harry Potter.

It’s nightfall, and Pham calls Phuri. Kao gets up to leave for privacy reasons, and I love how Phuri holds Kao back and takes the call. The discussion veers to Pham’s psychologist session, and I was certainly curious about what’s happening. Despite his rabid curiosity, Kao doesn’t ask questions and waits for Phuri to explain things. We finally get to learn the truth about Pham, and it is heartbreaking. It has been a long journey, but at last, Kao has won Phuri’s trust, and the wait seems worthwhile. Although Kao seems a bit lost when Phuri mentions transferring to a university in England, Kao still wants to help Pham. Phuri isn’t sure and replies obscurely, but Kao digs deeper. Phuri finally accepts, and Kao is happy to help. There is something about this couple that sets them apart. Phuri has strong defenses and doesn’t trust easily. To win that trust is like winning over the world!

We finally get a glimpse of the conversation that happened between Gui and Moon. The kid is pretty smart and already knew that Big Mama was the one writing the letters. Despite that, he kept up the farce because he loved Big Mama. He might be young, but the level of his maturity surprised me. Gui wonders if Moon might be the reason that Big Mama wanted Gui to visit the farm. He feels a kinship with Moon because, like Moon, Big Mama saved Gui years ago and gave him a home and an education; maybe it’s time to return the favor. Solo is feeling trepidation, and that’s obvious because they have just started dating. I’m looking forward to watching the next episode seemly because I want to know if these three would become a family or not?

As promised earlier, Psychomilk brings you some snippets from the Special Scenes on Roger Films Facebook page, only available for their supporters. Episode Seven’s special scenes include some sweet moments between a scared Solo as he hugs Gui tightly because he is afraid of the noise that the forest Geckos make.

Here are some interesting behind the scenes pics from Gui “Petch Chanapoom,” Phuri “Phu Phubeth” Instagram Posts, and the “Oxygen the Series” Weibo Account.

The main leads of Oxygen the Series had a recent photoshoot with Kazz Magazine, and the actors shared some pictures on their Instagram.