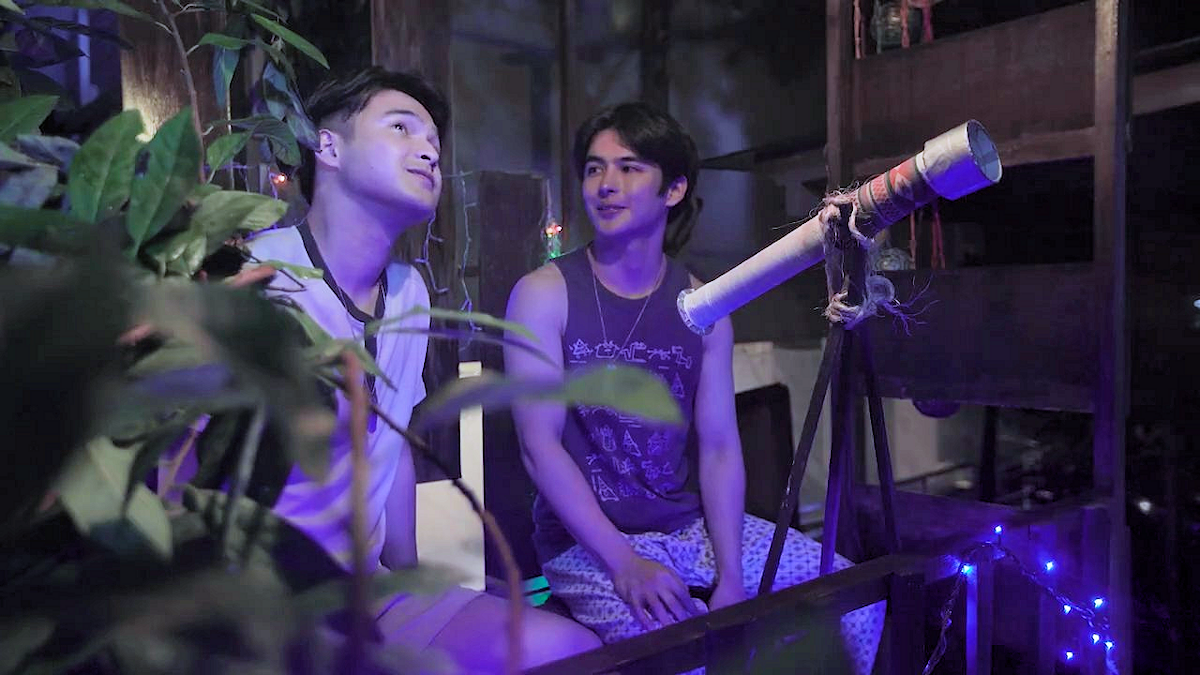 After Jim’s farcical declaration of his and Ben’s relationship, Jim and Leo ended up bashing each other. It’s rather comical because just that morning, Ben and Jim were at odds with each other, and now how the tables have turned. Stories are shared while our happy couple gaze at the constellations. While it’s quite obvious that Ben is someone very close and special to Jim, any deeper feelings Jim has are buried. As these two navigate the planes of their newly reforged friendship, our next door delivery boy Olan chooses now to try his luck courting Ben. The guy spent the entire lockdown alone and now suitors are falling outta the sky left and right. While they are getting closer, Jim’s girlfriend suddenly makes an appearance which puts a major rip into Ben’s dreams of catching his Star. Certainly, this love story is not going to be an easy ride and I’m wondering if our main leads end up together in the end? Will their relationship survive the test of time and tide?

As Ben explains about his toxic relationship with ex Leo, Jim promises to protect him forever. The next morning brings a surprise as Olan tries to gain Ben’s favor by becoming his permanent, exclusive delivery boy. Ben takes pity and hires him. As Flo pesters him for a video greeting from Jim, Ben asks Jim for a favor. The resultant basketball match leaves them hot and sweaty, with Jim blatantly admiring Ben. The adoration is fast turning into an attraction that leaves Ben flustered. Jim complies with Ben’s request while announcing to the world that they are close friends. High on emotions as Ben gets done with exchanging his delivery goods with Olan, he comes face-to-face with Jim’s girlfriend. Is this the end of the beginning of their new relationship? Will Jim choose Ben over his girlfriend?

I love watching my favorite couple having a normal conversation. The two seem to be pretty thick friends when they aren’t bickering like Tom and Jerry. I’m still wondering why Jim acted like that in front of Leo. Did he really have to lie about being in a relationship with Ben? Despite their arguments, it’s obvious that Jim cares a lot about Ben. His jealousy is apparent when he calls Leo ugly (so adorable), but when Ben turns the tables by saying, “I can’t be with you, right?” Jim is momentarily stunned. Despite that, Jim quickly recovers and asserts that Ben should never let anyone treat him badly. His declaration that he will fight anyone who hurts Ben tugged at my heartstrings. Since the only excuse to spend the night with Ben was Leo, they end up tangled together (because Jim can’t protect him if he isn’t clinging tightly to Ben). I’m speechless at Jim’s boldness, and they need to stop playing with my heart

The next morning brings more surprises to Ben’s doorstep. Olan turns up begging Ben to hire him as his “personal” delivery boy. By the way Olan barters, he might very well seem like he is literally selling himself to Ben, and Ben finds these antics adorable. This show is the only Pinoy BL where I want to ship the main lead with two characters. I mean, Ben and Jim look good together, but so do Ben and Olan. Olan has this audacious flirty energy that is a major plus point, and I can’t help but ship him with Ben. I love Olan’s sly innuendoes, and they make me laugh. He went from not wanting to sell his “virgin body” to proclaiming how he is “handsome and fast,” finally to declaring “be mine.” The entire time, I wondered if Olan was really fired from his job or he is just using this opportunity to get closer to Ben. Ben knows that something is up, but how can you say “No” to this overzealous puppy?

Even best friends like Flo can be pretty annoying when they think you are bluffing and don’t believe you. So poor Ben is left with no choice but to accept her challenge to get Jim’s video greeting. Of course, Jim loves to tease Ben, and he challenges him to a basketball game instead. Poor Ben, both of his best friends are nuts. So begins the game, and I spent the entire time wondering what is happening because the game left me all hot and bothered. As if that wasn’t enough, while Ben is changing his shirt, Jim walks out fresh from his shower. There is a strong attraction, and Jim certainly appreciates the view. It is in moments like these where I’m unsure that Jim is completely straight. Jim loves to tease Ben, but the way his eyes gleam while watching Ben is a sure sign of his feelings. He hides them well and uses witty banter to annoy Ben instead, but the emotions are there. Also, we can appreciate the fact that both of them look pretty hot shirtless? Ben asks for the video greeting, and after a round of flirtatious banter (yet again), Jim agrees.

Apparently, Jim’s mission of “torture Ben” isn’t over just yet. Jim teases Ben yet again by getting in too close quarters, and Ben is left all bothered again. I’m enjoying this sexual tension, and it’s pretty evident. Jim might brand it as teasing gestures, but it is anything but that. After hassling Ben a little more, Jim takes out their old telescope, and Ben is surprised that Jim still has it. The telescope seems broken, but Jim assures Ben that he can repair it. The way Ben looks at Jim with wonder and amazement displays his changing emotions. They are fast heading from adoration into love territory, at least for Ben. As Ben sleeps off, Jim really does repair the telescope and then sits down watching his best friend. Jim confuses me with his sudden behavior change. Whenever Ben isn’t paying attention, Jim watches over him closely. However, I don’t think he wants to admit this sudden attraction that he is feeling.

I love the conversations these two have in the middle of the night, where they bare their hearts and share their worries. The last time it was about Jim and his issues with his father, it is about Ben and his problems with his mother. I appreciate how Jim assures Ben and tries to lift his spirits. The discussion is valid because I agree with Ben. Parental disagreements are a major detriment in every child’s life. As a child, the only thing that we expect is that our parents accept us the way we are – whether related to our choices in life, education, or even our sexuality. Shouldn’t an adult have the freedom to decide for themselves? Why do parents try to bind their children into restrictions and try to control their lives? Ben wants to be a baker, so why can’t he pursue his dream instead of becoming a computer engineer? I’m glad that Ben has a friend like Jim. They might be talking for the first time in ages, but their connection is still strong. Also, the way Jim stares at Ben will make your heart flutter.

Jim doesn’t stop when it comes to surprising Ben. So the new dawn brings in a great news item when Flo calls Ben and accepts his claims. It seems that Jim uploaded a video asserting that he knows Ben and that they are “super-duper close” (I jumped up from my bed and did a happy dance). Flo finally admits her mistake (I was pretty miffed with this girl’s rudeness, but all is well that ends well). I’m waiting for the day when we have a love declaration online.

Since we aren’t done with our quota of shocking news, first, Olan claims the right. It’s audacious how he indirectly flirts with Ben and coming from someone else might seem annoying, but not Olan. I love the way Ryan Martinez is playing this character – it’s rambunctious and almost makes me wish that Ben might fall for him instead (I have nothing against the BenxJim ship, just keeping other options open). BL dramas are incomplete without a fem Fatale busting the main lead’s happiness. Evidently, Jim has a girlfriend who is visiting to spend time with her boyfriend. The crestfallen look on Ben’s face almost killed me. Next week’s preview shows Jim proposing to his girlfriend. What will happen to Ben? Will they ever get together? Or will Ben risk his heart and take a second chance with Olan?