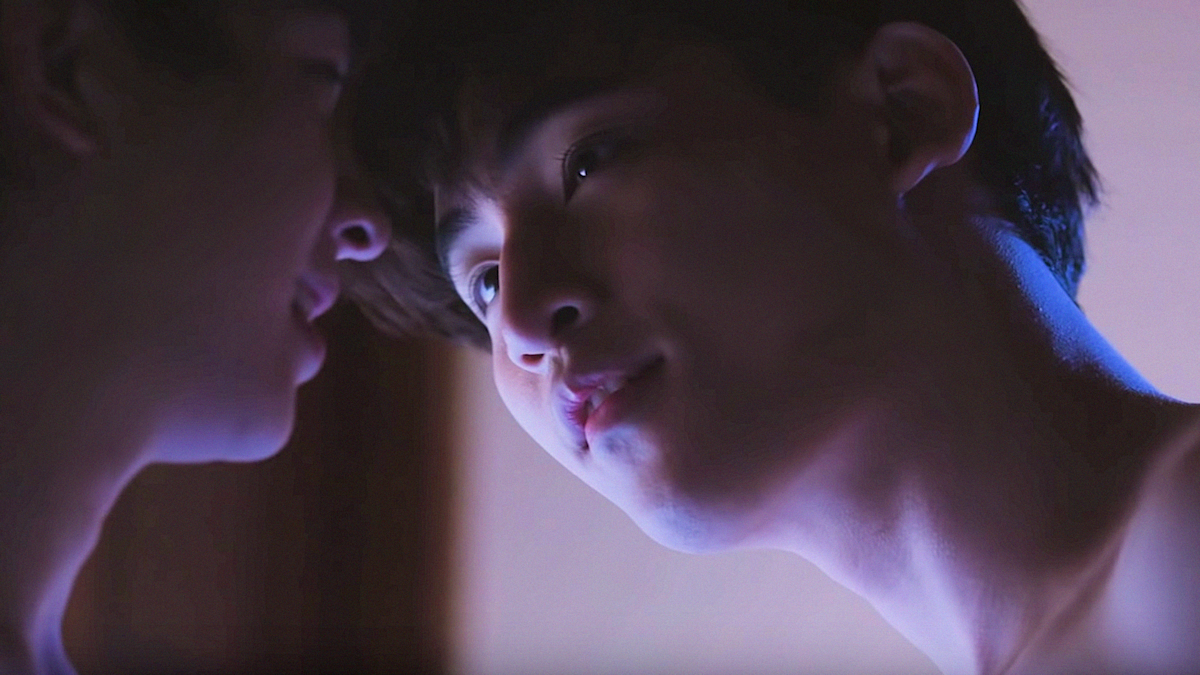 It started from the scene from the recent Korean BL show – “Mr Heart”. Sangha’s scene where he thanks Jinwon for making him smile and saving his life was such a heartwarming one. I felt so connected to Sangha at that moment. There are always people who unknowingly nudge us on the path we need to take in this life or even motivate us not to give up. Sometimes they seem so far away; sometimes, they are not even real. Whatever they are, they leave a mark in your heart and make you a better person than you were before knowing them.

My initiation into the world of BL shows was by accident. Earlier in 2020, MyDramaList recommended me the show “Until We Meet Again” based on my recent watchlist. As I read the synopsis, I realized that it is a love story between two guys. However, at that moment, I was totally intrigued by the past-life plotline [(and partially by Ohm’s pic in the poster (below) that MDL had as the cover image for the show at that time)] Until We Meet Again was currently airing at the time, something that I failed to check when I hit play on the first episode on YouTube. Within the next 48 hours, I had watched all 12 episodes available at the time. The wait for the next episode was so frustrating; I cannot put it into words now. I never knew that this would become my weekly routine since watching the BL shows and waiting for the next episodes. That one random choice and my momentary attraction to Ohm’s bare back completely changed 2020 for me, secondary only to how COVID changed everyone’s life.

Until We Meet Again scored many of my firsts – first Thai drama, first BL drama, first artist crush (when I thought I was so over crushing over fictional characters & celebs alike), first currently airing Asian drama, the first hashtag I saved in my Twitter search in 2020 and a few more. If I keep listing, it will make me look obsessed with this show (which I AM actually). Being a little of a reader, I always read about anything new that catches my attention, so I read about the term BL, its origin and usage, how it has changed over time, and how Thailand was the ruling country in making BL shows at the time. It should be no surprise that I read about all of this on the very site that I am sharing these thoughts today. Red’s feature articles helped me understand the world of BL shows and how these shows, though being more of the sweet fluff variety, do manage to highlight some of the realities of these relationships.

Gradually as I watched more of the BL shows and talked to my guide & favorite person on Twitter to talk about BL – Red (Editor’s note: ‘Red’ is the nickname of Psychomilk’s founder, Jed), I learned to look past the fictional & dramatized elements and find the heart of these stories. So I started with the legendary Thai BL show, featuring the royal couple of GMMTv  – Singto and Krist from the show SOTUS. Oh boy, did I have a crush on Singto? Absolutely! Do I still fangirl over him? That’s true too! I have never watched anyone’s fan-edits or event videos or BTS as much as I have gone through the whole Peraya hashtag on Twitter and YouTube. I admired these two, especially Singto, so much that I have seen their individual works too, and I love any time Singto is on screen. All this when I was such a noob in the BL fandom.

If I thought I was obsessed with Until We Meet Again, I was in for a huge surprise in the form of 2gether the Series. I was watching some other BL shows when 2gether started its run on LineTV and YouTube, so I picked it from the third week of its premiere. While the opening episodes were decent, I remember being hooked on this show from the first episode, which coincided with the lockdown announcement due to COVID in my part of the world. It was not an easy time for me as the travel ban was enforced, and I realized I would not see my family for a few more months, being stuck in a different country all alone. Fridays, 11:30 AM (my local time), 2gether new episodes would appear on GMMtv’s Youtube channel, and my Twitter timeline would suddenly explode, and I swear I kept an eye on the global trends on Twitter on Fridays. 2gether trended for about 4-5 hours every week in top 10 Global trends on Twitter – such was the power of BL fandom and this show [for differing reasons].

It might seem stupid to admit this but watching Sarawat and Tine was my happy place for the next two months. I loved knowing more about Sarawat’s story, and I laughed and cried with him as the story progressed. Months later, as Still 2gether finished airing, I realized I was a bit more objective in admitting that these special episodes did nothing to add to the original story. Still, they managed to make people forgive the show for the initial season Finale episodes high-five between Sarawat and Tine (instead of even a modest kiss)! Even then, any random Bright-Win picture makes me think fondly of those days.  I made new friends on Twitter while watching 2gether, all my fangirling moments over Bright, the Scrubb songs that will always be part of my playlist, and how I will always be thankful to this series for keeping my mind effectively distracted from the Pandemic.

As I mentioned earlier, Pscho-milk.com helped me pick many older BL shows, and watching them made me realize how I had never bothered to know more about the LGBTQ+ community. Even when I accepted them, I knew nothing about their struggles, pain, and the way their community fought to make its identity known to all. I still remember the one dialogue from Dark Blue Kiss, where the character Pete mentions why it is an additional burden on gays to perform better in studies or their careers? Just because they sort of disappointed their loved ones with news of their sexual orientation, do they need to compensate for that? It was one of those moments when you know that a particular scene is forever imprinted in your mind, and it was so universal in the application that I could relate to it in my own way.

A friend recently asked me if I also knew the realities concerning laws for & against the LGBTQ+ community in the countries that make these shows. I realized only Taiwan has legalized same-sex marriage (Fan theory – it’s said that when marriage was mentioned in History2 – Right or Wrong, it is supposed to coincide with the year it was legalized) while others are still way behind. There are frequent protests carried out now to gain equal rights for the community. I hope we see more stories covering that, not necessarily with absolute reality as in a documentary, but mixing awareness with entertainment.

Accepting the differences & understanding the gap is the first step in making sure your loved ones and people around me do not feel mistreated by words or actions. There is no right or wrong way to reach the doors of this realization. Luckily for me, the journey started with watching some amazing BL shows by accident and meeting even more amazing people on Twitter. I hope more people like me discover this world of beautiful stories of friendships, love & a life imagined, so full of bliss. You never know where you’ll find your next favorite story.