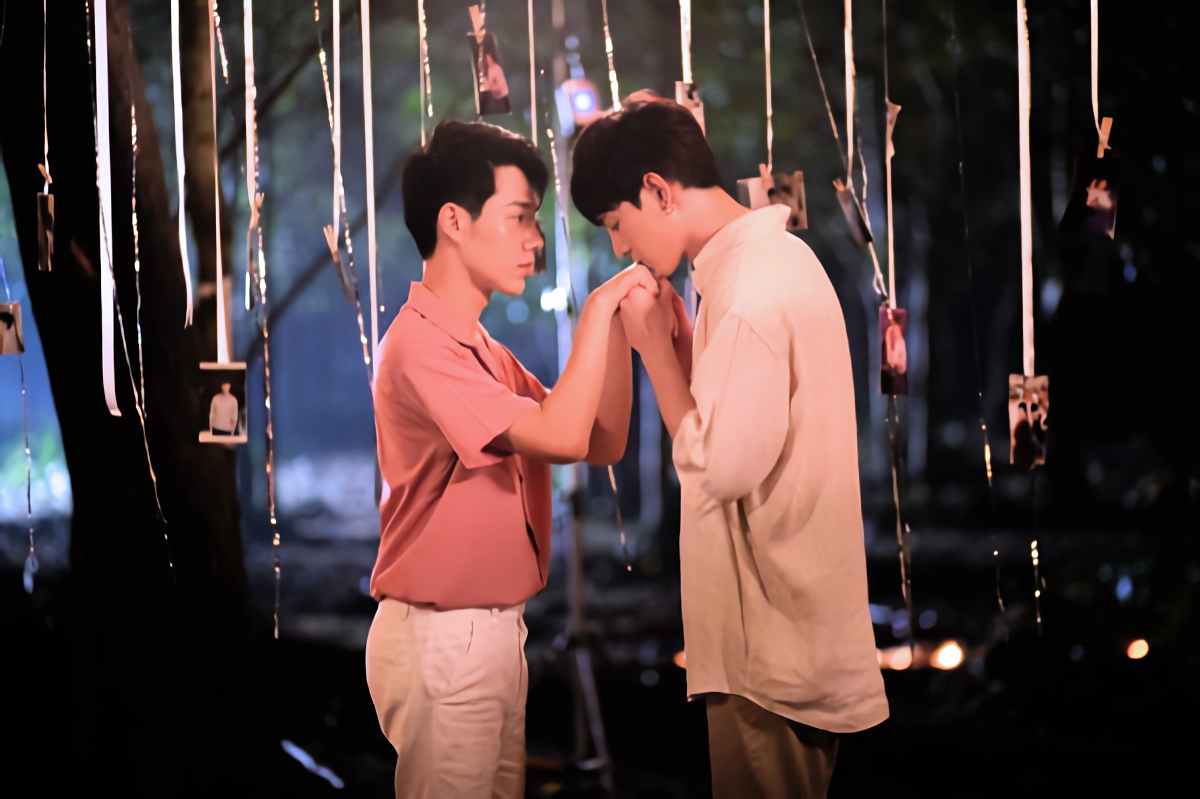 This episode served as a reminder that all good things come to an end, sooner or later. As Solo and Gui come to terms with Moon’s situation and try to make things easier for the adorable yet lost kid, tragedy strikes back home. Siwarokin, Solo’s father, returns with Linda (Solo’s supposed fiancee) in tow, and this raises a big question mark on our sweet couple’s blossoming relationship. Phuri, on the other hand, is growing more accepting of his feelings for Kao, although the confession still seems far off. The Khim-Petch-Khem love triangle gets even more entangled. Petch being entirely oblivious of Khem’s affections makes a move on Khim instead, and the situation gets out of hand.
This review is a joint effort with my dear friend, Jenhg. You can see her thoughts on this episode on her blog. Each week, there is a build-up of emotions and anticipation as we ponder over our opinions’ similarities and differences! Let’s see what we feel about this one!

As Solo and Gui go trekking, Moon tags along. Although Solo isn’t happy about the situation, Moon’s innocence tugs at his heart. Our couple shares some quiet and romantic moments. On their return, however, Moon learns about Big Mama’s passing and collapses emotionally. While Gui is frozen at the moment, Solo takes the lead and makes things easier for the sweet kid. As they plan to return home, Moon yet again becomes an issue they need to deal with. However, this time, Solo and Gui both manage to allay Moon’s fears. However, our sweet couple’s return back home sparks more issues as Linda, Solo’s fiance, confronts them. Phuri is growing closer to Kao and makes efforts to learn more about his bunny. Petch, along with Khim and Khem, plans a camping trip. However, the situation gets out of control when Khem witnesses Petch and Khim kissing.

I truly enjoy Phuri and Kao’s conversations. They are closer to each other at this point, but Phuri needs to make the leap across that great divide. While Kao proceeds with his continuous efforts to win Phuri over, you might very well question his persistence. Phuri’s resistance seems to be waning, although the guy manages to keep his mask on and still delivers vague answers perfectly. I’m amazed by Phuri’s ability to wade through Kao’s questions and give obscure answers at best. But that’s Phuri for you! The guy doesn’t speak the language of love, and that’s the best you can get out of him.

Their rooftop conversation was even more interesting. I always thought that Kao is the only one who observes things around Phuri. But that’s not the case; Phuri is observant too. He questions Kao’s need for the red earphones and even patiently listens to the backstory. My soul left my body when he casually holds Kao’s face and asks him the most important question (because I have been asking this question for ages). Kao’s answer will leave you spellbound. At that moment, when Kao says that he wants to the air around Phuri, my heart skipped a heart. Phubeth and Boss are so good at depicting their character’s raw emotions; it is a blessing. I don’t think any other actors could have done justice to these roles. I also wondered why their book is called “Nitrogen” since Kao’s answer doesn’t gel with the title.

Our sweet couple Solo and Gui, are by the waterfall. Of course, Moon tags along (that kid loves to annoy Solo more than anything else). Although Solo may act like he is annoyed with Moon’s presence, it’s all pretense. When Moon loses his plushie, Solo goes searching for it and brings it back to the crying child. So after the kid falls asleep, Gui unknowingly gets drunk. I must say a drunk Gui is quite daring as he takes the initiative to be closer. I’m sure Solo is left wondering about to handle this situation. But how can anyone resist those puppy eyes or pout? No one, at least not Solo!

The next morning when our happy family returns home, Moon goes missing. He hears someone talk about Big Mama’s hospitalization and decides to investigate things on his own. While everyone is growing anxious about his sudden disappearance, Solo correctly guesses that Moon might be at the hospital, and indeed he is. Solo tries to console the crying kid and promises to let him meet his Principal. Solo has been through the same situation and doesn’t want Moon to go through the same pain. It is difficult to explain to a kid that their parent is never returning, especially a kid who has lost his parents twice. I loved the scene where Solo takes them stargazing. It might be a white lie, but Moon is happy to meet his Principal, who is supposedly now a Star in the sky. I loved watching these three play, “Happy Family.” I’m hoping that by the time we reach the Finale, Moons becomes an integral part of their lives.

I have been avoiding the elephant in the room for the past two weeks. But this week, we need to discuss this issue. Petch plans a camping trip with Khim and Khem. Although Khem is under the weather, he won’t miss out on the chance to be with his favorite Doctor. So while Petch spends time trying to woo Khim, Khem is making heart eyes at Petch instead. I don’t whether I should cry watching Khem or laugh at Petch’s ridiculous attempts. The situation goes out of hand when Petch practices lines to woo his love interest with Khim and then inadvertently kisses her. Khim is affected, but the worse thing is that Khem catches them in the act. Knowing the spoiled kid he is, Khem will probably blame his sister for stealing his man and making her life a living hell. I’ve spent a lot of time questioning the need for the series following this odd love triangle, and I feel like it’s a waste of my time. I had rather watch Solo-Gui or Phuri-Kao romance instead. Or get me the couple from the third book, “Anakin.”

Finally, the grand confession occurs. Although they started speed dating right away, Solo and Gui have never openly talked about their feelings. I always felt robbed of hearing their inner thoughts. So Gui sets the stage for the confession. It was painful to watch Solo recount his parent’s failures and how much it affected him. It was also shocking to hear him say that he doesn’t like Guitar much, but things changed after meeting Gui. The fact that he is pursuing something that doesn’t interest him shows how much Solo misses his mother. I enjoyed watching them share their honest feelings, and Gui certainly stunned Solo with the sudden love confession. But it was long in coming, and I’m glad they got it out of the way.

Since Solo doesn’t want Gui to get too tangled in the camp-teacher affair, he asks Jay to pull strings and gets a new teacher assigned to the school. Moon has grown too close to both of them, and it was heartbreaking to watch Moon cry over their apparent departure. However, I have huge issues with Solo’s statement, “boys don’t cry.” It sounds cliché; men can cry too. After all, they are human beings, and keeping things bottled up isn’t going to help their psyche. Saying this to a small kid carries subtle toxic masculinity with it and is outmoded. However, this speech stops Moon’s tears, so mission accomplished.

They return prepared to face anything and everything. However, nothing could have prepared Gui to face Solo’s ‘fiancee’ Linda. The woman seems to know everything about Gui and Solo’s relationship. I absolutely hate the evil girlfriend trope as a plot twist, and I’m growing bored with this premise. However, I guess the sweet couple needs to go through hell to come out stronger.

As promised earlier, Psychomilk brings you some snippets from the Special Scenes on Roger Films Facebook page, only available for their supporters. Episode Ten’s special scenes include Moon and Solo acting adorable. These two certainly have funny dynamics.

Here are some interesting behind the scenes pics from Gui “Petch Chanapoom,” and “Oxygen the Series” Weibo Account.

We also have some stills from”Posh Thailand” Magazine’s recent photoshoot featuring Phu Phubeth and Boss Thanapat. Both the actors look smoking hot and will set your screen on fire!