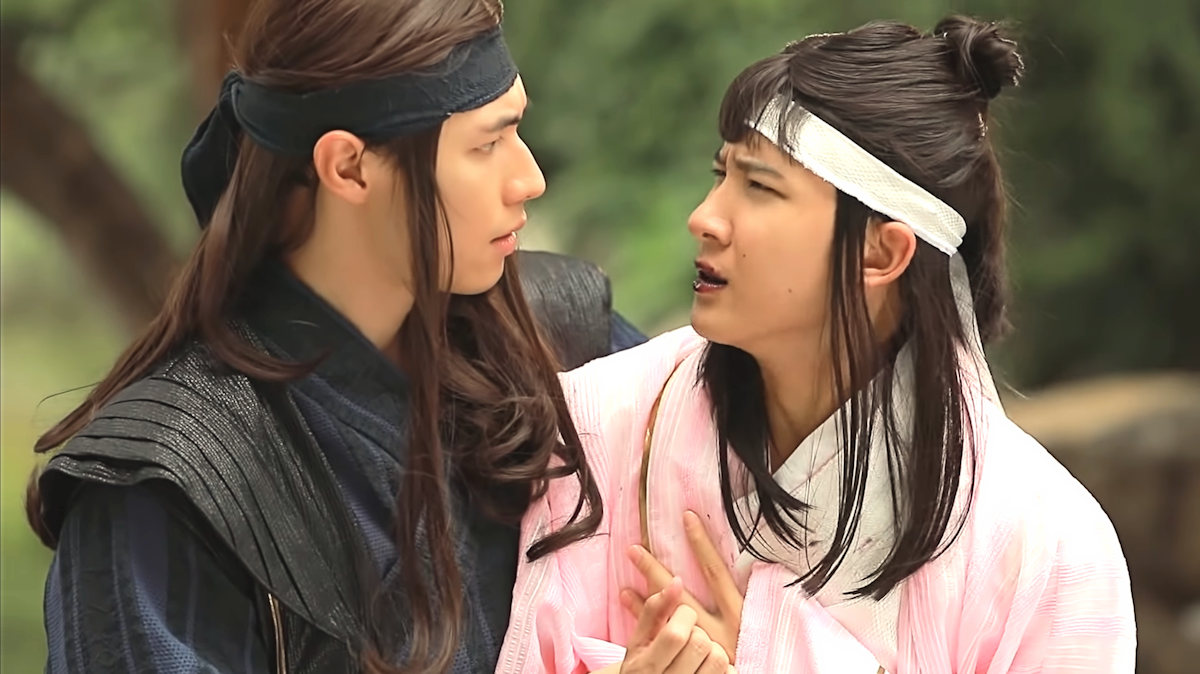 First and foremost, I want to thank Psycho-milk for letting me be a guest reviewer.  I love blogging and writing about dramas so the more I get to do the better.  This format of review and drama is all new to me so it will be lots of fun.

I am excited to review Tonhon Chonlatee by episode as it airs and see if my views change and/or match the voices of twitter and others who are watching the drama when I am.

Chonlatee has had a crush on his next-door neighbor and friend Tonhon since they were children. He never admits his feelings to Tonhon, and Tonhon eventually moves away. While away, both boys grew up, Tonhon gets a girlfriend, and Chonlatee still holds on to his crush. One day, Tonhon shows up again after being gone for years, and he’s single. What happens when Tonhon starts to develop confusing feelings for Chonlatee? Will Chonlatee finally admit his feelings to Tonhon? This series explores their growing and changing relationship with all of these revelations and changes.

A sweet and kind person with a big heart, here portrayed by Khaotung Thanawat Rattanakitpaisan, who was featured in GMMTvs’ 2Gether and Still 2Gether.

One half of the second couple in this drama and roommate to Tonhon. Portrayed by Toptap Jirakit Kuariyakul, also known for his roles in “2Gether,” and “Still 2Gether,” and the great chemistry he has with his co-star below…..

The other half of the second couple in this drama and roommate to Tonhon. Here played by Mike Chinnarat Siriphongchawalit, no stranger to BL fans of “Theory of Love,” “2Gether,” and “Still 2Gether” as well.

Tonhon’s Ex-Girlfriend. Portrayed by Kapook Phatchara Tubthong, a beautiful 26 year old Thai star featured in six Thai Lakorns in 2020 alone. Her first role in a BL was in “Our Skyy,” back in 2018.

Miriam, here played by Jan Ployshompoo Supasap, a veteran of several BL series, and playing as Praepailin in the first season of SOTUS

I have never seen any of these performers, so this will be my introduction to all of them.

Overall, I think Episode 1 of this series was a solid start. It didn’t seem slow, which you sometimes get because there is so much exposition in the first episode. It also didn’t seem too fast-paced either because the episode lay the groundwork for the rest of the series. It was a good balance of the two.

I went into this series, not knowing much about it, so I had no preset expectations. I didn’t know if it would be a more serious BL drama or on the funny side. Let me tell you – it’s definitely on the funny side. When you start with an introduction as a daydream sequence parodying The Untamed (god, those wigs, haha), you immediately get an idea of what kind of humor will be in this drama. Honestly, this kind of almost slapstick humor isn’t my usual cup of tea, but I was dying with laughter throughout the episode’s run time. There was humor in the dialogue and line delivery and the acting and plot of the show.

Since this was the first episode, we weren’t introduced to every character of the series, but it still introduced quite a few of them.

Most of Episode 1 took up the introduction of the main characters Chonlatee and Tonhon. We get to see the history of their relationship and get to know both characters more and their personalities.

Chonlatee is a naïve, sweet boy who has loved Tonhon most of his life. He hasn’t hidden that fact from his family, so all of his family members know, making for some hilarious one-liners and scenes throughout the episode. You got to give it to a character who has had a crush on another person for most of his life and hasn’t veered from that path. Chonlatee has lines like “I don’t want him to like me back or anything, I just want him to accept me for who I am,” and “For me, just seeing him from a distance, speaking with him every now and then, or hanging out with him once in a while is good enough,” which gives you glimpses of his character. Chonlatee is just a super sweet and nice guy completely dedicated to Tonhon and who is completely okay with being open about being gay.

Tonhon is the complete opposite. He is a little more closed off, quieter, more masculine, and a tough guy. I mean, he drives a motorcycle – the stereotypical bad boy image right there. Tonhon has always taken care of Chonlatee, so he sees him as a little brother and is protective of him, much to the heartbreak of Chonlatee. It will be interesting to see his character change and grow through this series as his and Chonlatee’s relationship begins to change.

In Episode 1, we are also introduced to Chonlatee’s mother and best friend. The two cheerleaders in his court and very supportive of his life and feelings for Tonhon. I love both of these characters because it’s special to me when families and friends are portrayed as accepting sexual orientation. Who doesn’t love a mother who basically tells her son to talk to his crush because his crush is still his friend or pushes him to decide to be near his crush all the time and not to be so indecisive?

His friend Pang is very supportive and such a cheerleader for Chonlatee and Tonhon’s relationship. She’s already sneaking around corners to take videos and pictures of the two together. When you have lines like “Love is not about gender,” you know we as an audience will love her and help her be a cheerleader for this relationship as well.

Last but not least, we were introduced to Ai and Nhai, Tonhon’s roommates. I will say no more than this because of spoilers, but this should give you a preview of what will develop in the drama and by the end of the first episode.

I loved the chemistry in Episode 1 between all the characters. Tonhon and Chonlatee seemed very comfortable around each other. I know, I know – Chonlatee did not seem “comfortable” – he was freaking out/squirming the entire time. The actors seemed natural around each other, and the chemistry just flowed off of them. They look good together. I am excited to see their relationship grow and blossom. Chonlatee also had great chemistry with the actress who played Pang. I like how their two characters interact on screen because you can tell how close the friends are and how they don’t hide anything from each other. We love a fangirl to cheer on and support her friend in his new relationship, and I am excited to see this happening in future episodes as well.

The chemistry and comedy led to some great one-liners in the first episode. The script and delivery had me laughing out loud the entire time. A lot of the hilarious dialogue is exchanged between Chonlatee and his mother and best friend when they were trying to convince him to admit his feelings to Tonhon. Their dialogue is very witty and sometimes even sassy. We aren’t going to mention the entire dialogue from the opening daydream sequence because the one-liners in that sequence were so funny. I can’t wait to hear more witty comebacks, sassy comebacks, and hilarious comments in the future.

Overall, a solid start to a new BL series. I like the chemistry of the main couple. I am worried that I might get tired of this type of slapstick humor over 13 episodes because I usually am not a fan of this kind of humor, but hey, I don’t mind it for now. There were some cringy scenes but not too many. I look forward to learning more about the second couple in the upcoming episodes. I look forward to seeing how the main couple’s relationship progresses throughout the series. I can already see some obstacles that are going to pop up eventually.