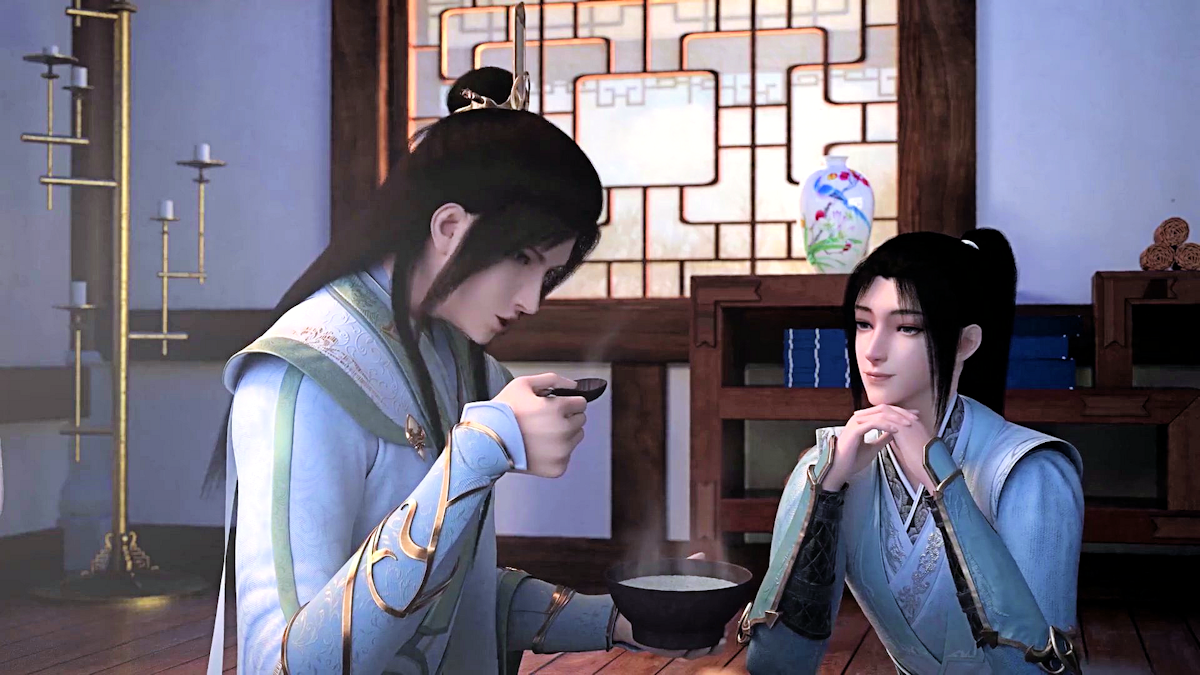 As Shen Yuan finally wakes up from the “Nightmare”, the system won’t let him rest in peace. He wants to avoid the “Endless Abyss” storyline at costs, but the system yet again puts a tent in his plans with points deduction alert. With no other option left, Shen Yuan reigns to this destiny and as such Luo Binghe begins his training. Unbeknownst to Shen Yuan, Luo Binghe is training under the Demon Nightmare as well. His return from Waizhou aligns with the God Alliance Congress. As Shen Yuan and his Junior Qing Qi leave with the disciples for the Congress, Luo Binghe puts a formidable act and displays excellent swordsmanship. We have a relative new entry Gongyi Xiao, who seems to be quite revered among the disciples from various Peaks.

Shen Yuan is assaulted by recurrent nightmares where Luo Binghe has been bottled in a vase. As he wakes, he decides to toe the line and reform his behavior firmly in Luo Binghe’s good books. On the other hand, the poor kid decides to undergo training under the Demon Nightmare to take his demonic aura. As the training begins, Luo Binghe far exceeds the other disciples. He leaves for Waizhou, and his return is marked with an invitation to the Gods Alliance Congress. As Shen Yuan grows increasingly worried about the “Endless Abyss” storyline, Luo Binghe is fast developing feelings for his Shizun. The Gods Alliance Congress has listed rigid rules with demons and monsters placed at different points in the Juedi Valley. As the disciples enter the valley, they are attacked by the monsters. Luo Binghe expertly kills a monster while saving another disciple. Gongyi Xiao lends a helping hand, and they save the day.

Shen Yuan is one character whom you can never understand. He seems to have a dual personality because his spoken word is seemingly always in conflict with his internal monologue. Like he wakes up from the Nightmare and instantly starts bartering with the System. Their conversations are always so ridiculous that you can’t help laugh. While he is trying to escape the “Endless Abyss” plotline and bargaining for more points, Luo Binghe enters. Instant switch and Shen Yuan feigns illness. When Shen Yuan questions Luo Binghe about Nightmare, the kid lies. The way Shen Yuan acts condescendingly is because he knows the storyline should be downright annoying, but I find him endearing.

Shen Yuan knowingly checks Binghe’s pulse (boy, you should watch the kid closely because I’m sure his pulse rose just because his Shizun is holding his hand). When Luo Binghe questions the need to kill all Demons, Shen Yuan instinctively knows where this is heading. This character is so smart that, at times, he seems prescient. Shen Yuan dodges the bullet by saying that even Demons have a right to live (Right, because Luo Binghe would be demonized in the future, and you want to gain his favor). He even goes as far as to accommodate Luo Binghe in his own home. Just when you think that Shen Yuan might be doing this because he feels sorry for the kid, the guy goes ahead and destroys his own image with his rambunctious internal monologues. At this point, I have major doubts about Shen Yuan’s feelings for Luo Binghe- is this romance one-sided or mutual?

Nightmare yet again pulls Luo Binghe into his carefully crafted dream and demands to know his decision. Although at first Nightmare demands that Binghe acknowledge him as his Master, Luo Binghe refuses. I’m stunned by this kid’s resilience. I’m not sure if it is respect or love, but he will not allow anyone else to take his Shizun’s place. Thus begins the rough training, and I’m enjoying watching the transition. Ming Fan is surprised by watching the closeness between their Shizun and Luo Binghe. As Luo Binghe trains on the field and in his dreams with Nightmare, he becomes more disciplined. His popularity grows, and Ming Fan is left alone. Despite the tough training, Luo Binghe still finds time to moon over his Shizun and cook him delicacies. Ming Fan, on the other hand, is growing jealous and waiting for the right opportunity. Luo Binghe leaves for Waizhou, and I’m guessing it’s for more training sessions.

In the midst of all this, Liu Qing Ge helps Shen Yuan out with power transfer to resolve his unstable aura issues. I’m not sure if Shen Yuan realizes the connotations, but it seems like he loves to flirt with everything alive. Even Liu Qing Ge isn’t spared, and I’m left wondering why he is still helping Shen Yuan. Not just that, he even worries about Luo Binghe’s absence because there is no one else to take care of Shen Yuan. This situation is so far removed from their first meeting where Liu Qing Ge wanted to kill Shen Qingqiu. Shen Yuan has certainly changed the dynamics of this odd relationship.

As Liu Qing Ge leaves the invitation for the upcoming “Gods Alliance Congress,” Shen Yuan grows increasingly worried. I’m guessing, and according to the storyline, the Congress must be the place where Shen Qingqiu kicked Luo Binghe into the Abyss. As Shen Yuan thinks of an alternate solution, Luo Binghe returns to the peak. The joy of Shen Yuan’s face matches the longing on Luo Binghe’s. I’m not sure if Shen Yuan realizes Binghe’s affections for him when he clearly states that he missed his Shizun. Shen Yuan feels grateful, but the guy is surely oblivious to Binghe’s feelings. Shen Yuan confirms if Luo Binghe wants to be all-powerful and receives an affirmative response. Only he fails to realize that while Luo Binghe says he wants to protect his important person, Binghe is talking about his Shizun. I’m sure our idiot Master thinks that Binghe is thinking about YingYing. At this point, I’m doubtful about where this romance is headed.

The journey to the Congress begins, and Junior Qing Qi joins in with Shen Yuan. It’s pretty obvious that she isn’t a huge fan of Shen Qingqiu and dresses him down at every opportunity. But Shen Yuan doesn’t take it seriously and whiles away his time enjoying the chariot ride while eating snacks. Qing Qi mentions Ming Fan, and Yuan is intrigued. The way Luo Binghe gets jealous is adorable. He instantly rides to check up on this disciple that his Shizun admires (yes, you really need to check the latest addition to your harem). That’s exactly what Shen Yuan feels because he can’t help but mumble about Luo Binghe secretly dating (these two have got it bad for each other and are exhaustingly oblivious. Instant facepalm). The worst thing is that Luo Binghe is least interested in Ming Fan and just brushes her off after a short conversation. He returns to ride by the chariot, and Shen Yuan is surprised (yeah, like that kid will leave you alone).

The Palace Master’s Daughter explains the rules for the Congress. Spirit hawks are patrolling the whole Juedi Valley, and they even have a board to record points for each monster or demon killed by the participating disciples. The whole time I was wondering if the storyline is placed in modern times or ancient ones. Or is cultivation so highly skilled that they can record things by scanning as it is done today? There’s a major plot twist with the introduction of Gongyi Xioa. Ming Fan tries to seize the opportunity to show his skills, although I doubt he will stand the test. It’s not that he is incapable; Ming Fan just doesn’t have the intellect for it. As the disciples jump through the barrier and enter the valley, they are attacked by the half-breed monsters.

As one of the lady disciples fights the monster, she is injured. Luo Binghe kills the monster, and I was left wondering if this girl will be a part of his harem too. Just as he is helping the girl, another monster attacks, but Gongyi Xiao arrives and renders assistance. Both seem powerful, and Gongyi Xiao seems to be quite a revered disciple. I’m dying to watch the next episode because Shen Yuan sure looked surprised by Gongyi’s introduction. Does this character play an important role in the upcoming plotline? Will Shen Yuan kick Luo Binghe into the “Endless Abyss” or try to change the recurring plotline? Will the System allow such a massive change? Will Luo Binghe turn evil and try to imprison Shen Yuan?

Keep watching this space as we bring further updates from this ongoing Donghua!