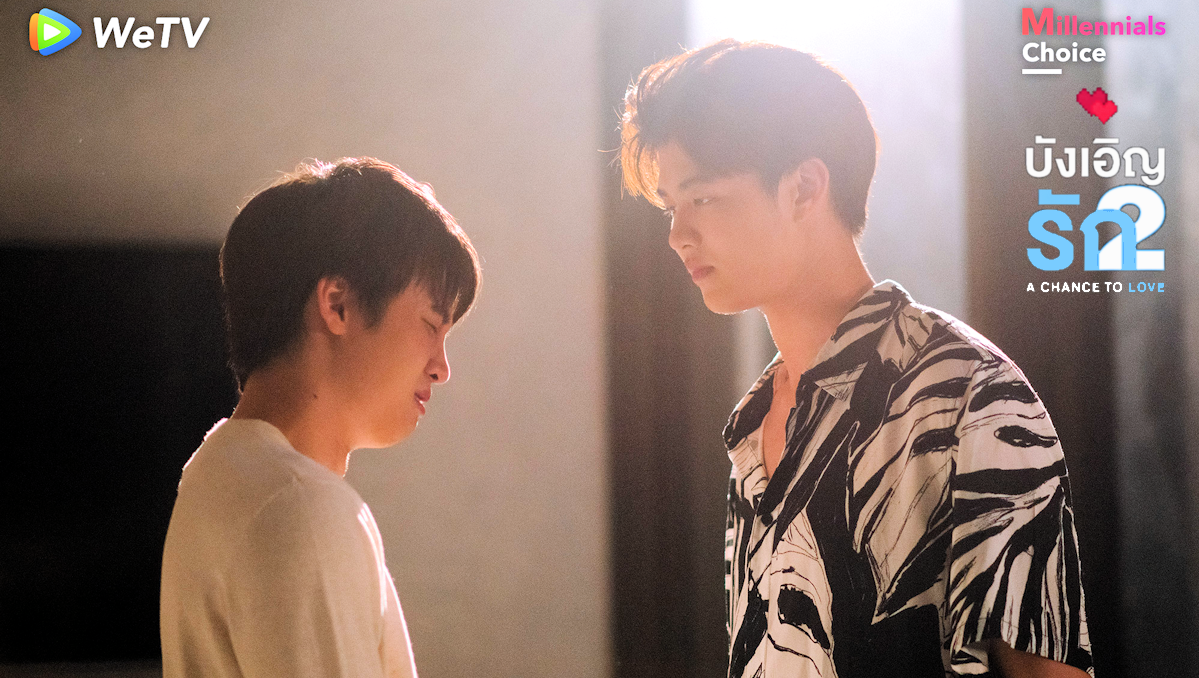 While Tin and Can are slowly settling into relationship bliss and getting to know each other, some shocking truths tumble out of the closet. We finally get a glimpse at the naïve lost kid whose trust was impeccably broken. As Can stands beside Tin to fight his battles, Tul tries hard to learn more about Can. What is his angle? Is it brotherly affection or nefarious intentions? Tul is a two-faced character, and it’s difficult to understand him. I’m guessing Hin is possibly the only person who knows him well as they do have a lot of history. Ae, on the other hand, is trying his best to reconnect with Pete and is persistent in his efforts. Will his perseverance bear fruit? Will Ae and Pete ever see each other again? Techno is still confused about his feelings for Kengkla, or is he just hesitant? Let’s review and figure out the various dynamics in this episode,

Can announces to the entire world that he is in a relationship with Tin. Although they are on a stable plane, Can spends time at Techno’s home to avoid his sister Lay. Lay, however, surprises him when she wholeheartedly accepts their relationship. Tin’s attempts are yet again blocked by Tul, and he learns that Tul knows about Can. Tin decides to move out, and after a short discussion, Can agrees to do the same. We finally learn the truth about how Tul had framed Tin and also why Hin separated from Tul. Tin is losing his patience and is figuring out ways to battle his elder brother. Can finally faces off with Tul, and Tin warns his brother to stay away from Can.

You will never meet a character like Can. After kissing Tin in front of the entire football team and announcing their relationship to his sister Lay, Mr.Foodie drags his rich boyfriend away – and then promptly repents and cries over his sudden outburst. The fact that he first denies liking Tin and in the same breath asserts that Tin is his boyfriend (Lay has no right to ship Tin with others) will make you laugh out loud. Can is such a cranky yet adorable character. Most of the time, he acts stupid, but his emotions are never fake. I’m guessing that’s one of the main reasons why Tin loves him so much. Can might not make a lot of sense most of the time; he makes Tin smile. Tin is enjoying this moment far too much and is rebuked by Can about “comforting him.” Can is just ridiculous; only Tin can put up with his antics. They even look good while sharing the same snack. I have no idea as to why we had this scene but damn, the sexual tension. I was on edge expecting them to kiss but Can backed off (and I did facepalm). Way to burst my happy bubble,

Can’s announcement spreads like wildfire and has various effects. Techno discusses the benefits of having a boyfriend with Job and then quickly regresses. I don’t understand what his exact problem is. If you don’t want to be with Kengkla because you can’t forgive him, say so, and walk away. But apparently, Techno is of two minds, because first, he keeps thinking about Kengkla all the time, and he recoils whenever there is any possible contact between them. At this point, I have given up on this ludicrous love story (because the two make no sense to me).

Ae, on the other hand, is on a mission. While Pond and Bow gossip about Tin and Can, they find it disturbing that Ae constantly keeps updating his social media accounts. It’s obvious to them that he is trying to share his daily life with Pete, but for how long? Ae surprises them with his answer, and I was floored. This guy is a far cry from the broken one whom we met in the pilot episode. Ae isn’t dejected or mourning. Yes, he is still waiting for Pete, but he is not having a pity party.

When Keen approaches Ae with the request to record a song based on his feelings, Pond questions the decision. Ae is indecisive, but later, he says with utter conviction that he will do anything for Pete, even if he doesn’t like it. It is in moments like these that the glimpses of the old Ae resurface: the one who is strong and would take on the world to protect his loved ones. I’m hoping that Ae and Pete meet sooner than later. Perth Tanapon’s performance here is top-notch.  He makes you feel Ae’s pain and desperation.

Sister’s can be pretty dangerous, especially when the brother is an idiot (Can) and chooses to avoid that smart sister (Lay). After spending a week trying to escape from Lay’s verbal artillery, Can is finally caught when he returns home late one night. Although both bicker like Tom and Jerry, I love how much they care about each other. It shows when Can declares to Tin that no one can hurt his sister or how Lay reassures her brother that she supports his relationship with Tin. Lay is totally sweet when she assures Can that even if their parents don’t support him, she will still stand by his side. There are times like this when I feel sorry for Tin. He has only one brother, but instead of doting on him, Tul spent his entire lifetime plotting and scheming against Tin. How far apart are these two sibling relationships?

Tin’s relationship with his father is as strained as that of his Mother. Although his father doesn’t want him interning at their company, he apparently doesn’t care about Tin buying a separate apartment. The apathy is clear, and it’s obvious that Tul is the priceless heir who will carry forward the Medthanan name. Tin is just spare or extra, whose existence is negotiable. As always, Tul is eavesdropping on their conversation and yet again tries to rile Tin. This guy spends so much time following Tin around; you begin to wonder if destroying Tin’s happiness is his only concern. The more I try to understand Tul, the more confusing he becomes. Meen Nichakoon is far too handsome, and I spent an inordinate amount of time swooning over him, totally forgetting that he is the antagonist and that I should hate him.

We finally get to notice the big showdown between Tul and Tin, where he unapologetically accepts plotting and scheming against Tin. At times, I notice cracks in Tul’s demeanor. It mostly happens when he is thinking about Hin or trying to talk to Tin. For some reason, these are the only two people in his life whom he is obsessed with. While he did break Tin’s trust while he accepted the truth with utter contempt, Tul was drunk. So I’m not sure if he was telling the truth or projecting his fears onto Tin. It’s quite possible that whatever Tul said that day might not be the truth. Something seems missing in this interaction because Hin reconfirmed my doubts. When Tin calls him to inquire about Tul’s weakness, Hin promises help but refuses to betray. The utter conviction with which he asserts that Tul isn’t a bad guy shouldn’t be taken lightly. Hin was the only person who was close to Tul, and it seems he might know what is going on between the two brothers.

Now I’m also invested in the Tul / Vadee / Hin love triangle. It’s obvious that Tul and Hin loved each other, and while Tul wanted to clear things with Vadee, she announced that she was pregnant. Why did Tul have a sexual relationship with Vadee if he was in love with Hin? So, apparently, they broke up because Tul took responsibility for their mistake, and Hin decided to back off. They originally had a “master and servant” relationship, and although their depiction in the novel is said to be quite depressing, the same elements haven’t been redressed in the drama. Hin is loyal to Tul despite everything, and Tul is still pining for his lost love. What a tragic pair these two are; I wonder if they will ever meet again and the consequences of the meeting. Tul is now married with a son. But knowing his wild nature, if Tul ever comes face to face with Hin, I’m not sure he will let Hin walk away for a second time. How will that affect his relationship with Vadee and Phupha?

The long-awaited confrontation happens, and while Tin seeks permission from Can’s Mother and brings him home for a sleepover, they seem happy in their little romantic bubble. Can is getting outrageous and is becoming more sexually demanding. So it was shocking to watch him touching Tin unexpectedly and trying to seduce the poor guy. With Can, you never know what goes on in his head; the kid is a bundle of surprises or shocks, So when Tul casually drives into the parking area and walks to introduce himself to “his brother’s most important person,” it’s obvious that Tul is up to something. He has already had Can investigated and is checking things by himself.

Can again has an outburst and is about to hit Tul when Tin stops him. I was surprised that Can listened to Tin’s pleas and went inside instead. Normally, he never does that when he is angry, but I guess Tin is slowly taming him. Tul, on the other hand, has some nefarious plan cooking up. I’m excited and worried because there could be two consequences to this plan. He will both admit the truth behind the drug scandal and come out clean. Or spew lies to break off Tin & Can’s relationship? What will be his next plan of action?

The next week’s preview seems ominous, and I’m already waiting excitedly to figure out this new equation. Will Can believe the evidence that Tul shows him? What is there on those photographs? Will Tin listen to Can or instead break off with him permanently? How will this love story progress further?