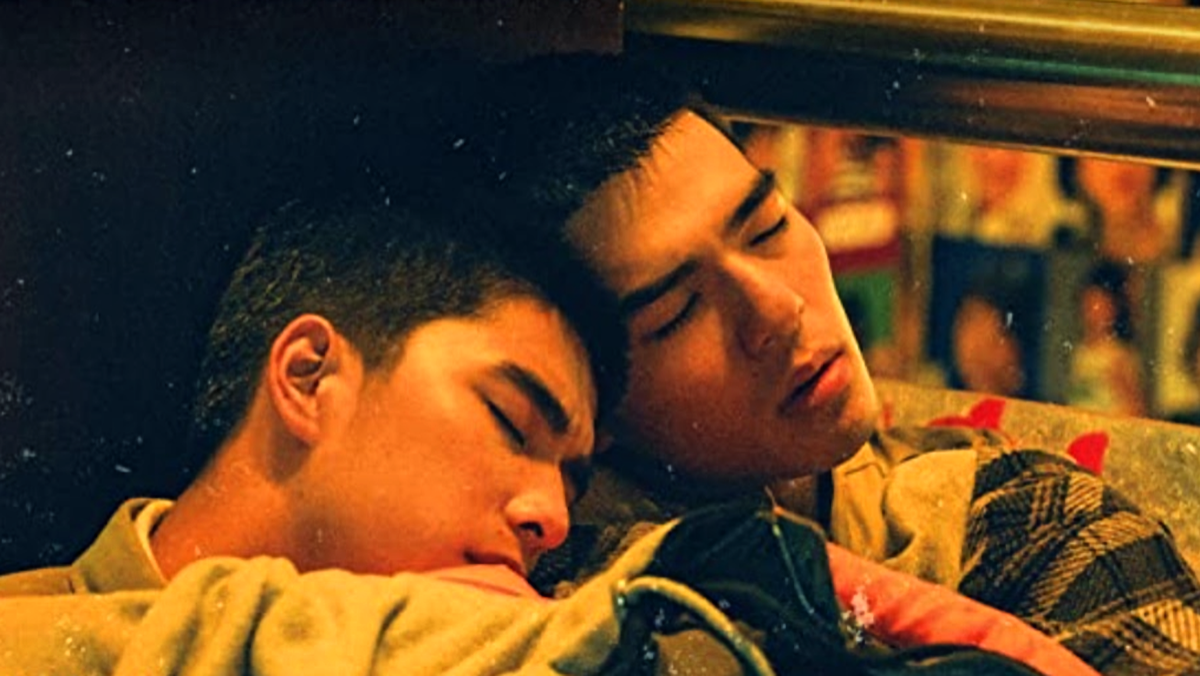 So you can like girls, but I can’t like boys? Is your love bigger than the love I give? What’s the difference between your love & mine?

If I were only allowed one word to describe the Taiwanese film Your Name Engraved Herein, it would be valid. It’s a stark, realistic, raw, and valid story about two men who discover their sexuality during the upheaval in 1980’s post-marital law Taiwan.

I was six-years-old in 1987, the year the movie initially takes place. I have few memories of that year outside of a horrendous bout with chickenpox. 1987 was the itchy year for me, and it would be another eight years before I had my first kiss with a female friend. 1995 was the year I admitted to myself that I was bisexual. There was no big announcement, no public coming out for me that year, but it was my realization.

Your Name Engraved Herein is that kind of film. It’s a realization, but it is also a brutal coming-of-age story amid homophobia, stigma, violence, and expectation.

In 1987, as martial law ends in Taiwan, Jia-Han and Birdy fall in love amid family pressure, homophobia, and social stigma.

While Your Name Engraved Herein takes place amid factual history, the movie focuses primarily on the two leads. From the moment the film opens, I feel like I was sitting inside my Advanced English class in college listening to Professor Callahan lecture about the importance of symbolism in literature. It is apparent from the beginning that the people behind this film have a firm knowledge of symbolic storytelling. It gives me the same feel that Francis Ford Coppola’s The Outsiders (1983) did when I first saw that film in high school.

Jia-Han and Birdy’s love story unfolds between heartbreaking shots of Jia-Han’s gay confession to Canadian priest Father Oliver (Fabio Grangeon). Although Father Oliver is supposed to be convincing Jia-Han that his feelings of love for a man are wrong, the raw emotions on Father Oliver’s face tell an entirely different tale. There is understanding in the priest’s gaze, the kind of compassion a person only finds in someone who knows on a fundamental level what the other person is going through. Even though Jia-Han is ranting, the entire confession feels like watching Jia-Han writing a troubled love letter to himself, Birdy, and the world.

Help me go to hell then. I’d rather go to hell now. Don’t all homosexuals deserve to go to hell? Maybe more people would understand me in hell?

Full of dialogue that punches viewers deeply enough to touch the soul, this movie takes every scene seriously. While the main focus is the burgeoning love between Jia-Han and Birdy, the events transpiring around them distort and damage those feelings. A gay classmate is bullied, along with a narrowly averted threat to burn his genitals with a lighter, play out while Jia-Han and Birdy are hiding together in a shower stall. On Taipei’s streets, a non-violent gay protester is dragged away by the police while Jia-Han and Birdy watch in anger and dismay. At school, Jia-Han’s friends warn him against spending time with Birdy. At home, Jia-Han is subjected to tirades about his future from his father. The Catholic school Birdy and Jia-Han attend transitions to coed, drawing Birdy together with an equally rebellious female student.

All of these emotions feed into the tale that is Jia-Han and Birdy.

Your Name Engraved Herein is a movie centered on human emotion instead of physical intimacy. Although there are intimate moments between the two leads, including a very visceral shower scene, these moments are never without a valid purpose. The shower scene expresses guilt and sadness as much as it does lust.

There is no real happy ending to this film, but there is also no despair. It has a nostalgic feel to it instead. Separated by the social standards of the time, Jia-Han and Birdy reunite many years later in Canada. A different era with a different social climate. The way they look at each other, the way they view the past love that brought them to where they are now. This progression somehow left me at peace. They’ve come to terms with who and what they are, which is the film’s main ending. For me, the entire point of the ending is that accepting themselves individually as gay is more important than seeing them as a couple.

Jia-Han and Birdy’s treatment by others and towards each other is genuine, raw, and gut-wrenching, leading to a symbolic conclusion. The two of them have moved past where they were, accepted who they are, and reach a place where it will be okay to move forward, which is the best ending for a movie of this kind. Their sexuality flourished during a time of social unacceptance and upheaval; the conclusion represents the peace they manage to find at the end of their journey. It is a romance, but a passage that focuses more on the trials of sexuality and what these two men go through to get to that peace – it feels centered more on validating their sexuality. In the end, the romance takes a backseat to what they gain personally.

Your Name Engraved Herein delivers the kind of storytelling that defines a movement rather than a romance.

In reality, isn’t that what most of our realizations are in life? Those moments when we discover who we are and what we’re about? For me, it was the year 1995 – the year I realized I was bisexual. That moment wasn’t about getting a happy ending for me. It was a confusing period that began a journey toward learning what I want from my life. Your Name Engraved Herein doesn’t focus on a happily ever after but rather how the characters feel about themselves once they reach that point of peace years later.

It is easy to see why it is the highest-grossing LGBTQ+ film in Taiwan of all time.  See Your Name Engraved Herein on Netflix