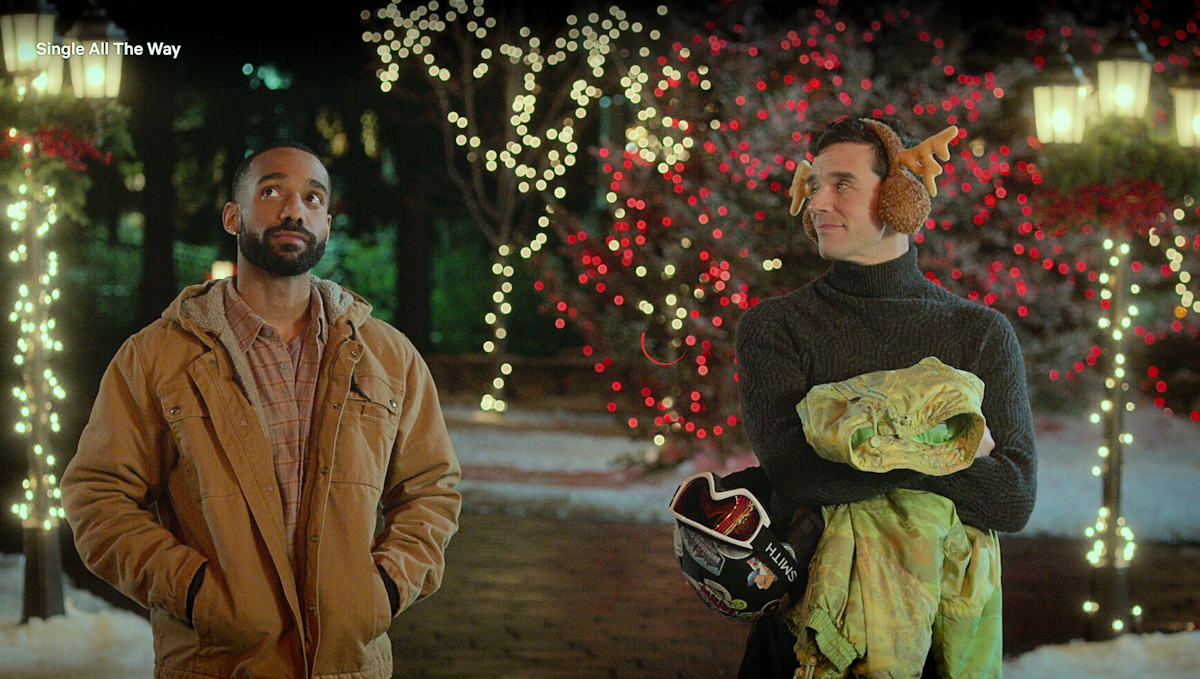 I admit I’m a sucker for a good Christmas movie. I’ve seen Love Actually and National Lampoon’s Christmas Vacation a million times. They are very different in tone, but they share one thing, the heart of the Christmas spirit. So I saw this advertised on Netflix, I had to try it. It’s a feel-good Christmas movie with a possible best friends to lovers trope. Oh, and it’s a gay romance.

So I asked my editor if he’d be willing to do a five-question review about this with me. Since I am a straight woman who loves all Christmas and queer content too, and he’s a gay man who is not completely obsessed with Christmas (read a bit of a Grinch😁), how different would our takes be on this movie? Read on to find out.

Desperate to avoid his family’s judgment about his perpetual single status, Peter (Michael Urie) convinces his best friend Nick (Philemon Chambers) to join him for the holidays and pretend that they’re now in a relationship. But when Peter’s mother (Kathy Najimy) sets him up on a blind date with her handsome trainer James (Luke Macfarlane) the plan goes awry.

My favorite scene had to be where Peter, our marketing photographer, has to come up with a whole new ad campaign at the last moment.  We’ve all had times where work interferes with a vacation or time with the family.  The boss wanted a last-minute rewrite of the whole campaign, a shaving cream Christmas type ad, but instead of models, he wanted real men. So since he is away, Peter turns to recruit his best friend Nick to help him out. The two of them share laughter and smiles as they work, showcasing their dynamics. It’s a simple yet charming scene.

Aunt Sandy.  Hands down, Jennifer Coolidge pulls off the best ex-showgirl with a heart full of love, home to nurse her unfulfilled dreams by pouring her heart into hosting the Christmas play every year. She is like all the best reindeer, brassy, boozy, ditsy, and sassy….all in one. But you see, she loves her family, and they love her, despite her flaws. She breezes into the scenes and somehow steals my heart.

I have to say both the husbands were a little boring. Jim and Tim. I don’t think I can even tell you which one was partnered with Ashleigh and with Lisa (the two sisters of Peter). They weren’t bad, but forgettable like mediocre furniture.

Surprisingly, not that many. If I had to give it a problem, there weren’t any problems. Everything is smooth for our heroes. They don’t tell you Nick’s family backstory other than a deceased mother, but everyone is happy, open, and accepting. So no one has the slightest bit of homophobia. So to me, it could have used a little more conflict.

Jen’s Love it or Leave It?

I love it. I spent most of the movie with a smile on my face. For those of you who want some sugary sweetness for Christmas, it fits the bill. It’s like sipping a nice mug of hot chocolate with lots of marshmallows in a cozy chair by the fireplace, with the Christmas tree twinkling softly as Christmas tunes play.  It’s a place of comfort and happiness. I will watch it again.

How many times have you watched a movie, and found yourself predicting what was going to happen, seemingly scene-by-scene?

Is “Single All the Way” Predictable? Oh yes indeed, it is.

All in all, is “Single All the Way” fun to watch? To a degree…. It would probably be even more hilarious if I was toasted, but I don’t drink or smoke, so it is what it is.

However, as a gay man who’s been “out” for many moons, “Single All the Way” is a cute movie but it’s complete fantasy. Call me Scrooge, curmudgeon, ne’erdowell, crusty, irascible, cantankerous, or even cynical, whatever – gay “gurlfriends” > “lovers” just doesn’t happen. However, suspension of disbelief is needed in all Christmas rom-coms, especially one with so many gay characters. SATW IS a Christmas movie, and as such, it deserves better from me. Think of “Single All the Way” as taking us out of the crappy situation we’ve been in for over a year and a ½, and sweeping us into a happier place and time.

My favorite scene had to be where Peter, looking for Nick just happens to drive by Nick’s Christmas present for Peter, a location for Peter’s dreamed plant store, with all that’s implied by Nick’s actions.

Peter’s Mom Carole, here played by Kathy Najimy, one of my favorite character actors who I saw first in “Sister Act”, Whoopie Goldberg’s hit from 1992. Her success was then followed by “Hocus Pocus” in 1993.

I really don’t think I have a “Worst Character.” All the characters were equally competent in their performances.

Hmm. The predictability of the entire movie. But ignoring that fact, there really weren’t any.

TheFNGee’s Love it or Leave It?

I loved enjoyed it, sorta. Eye-rolling was the predominant motion during my time spent watching this movie. Maybe next I watch it if ever, I’ll have to take it for what it’s intended – a predictable, schmaltzy, rom-com, but with gay characters at the center.

Single All the Way is available on: