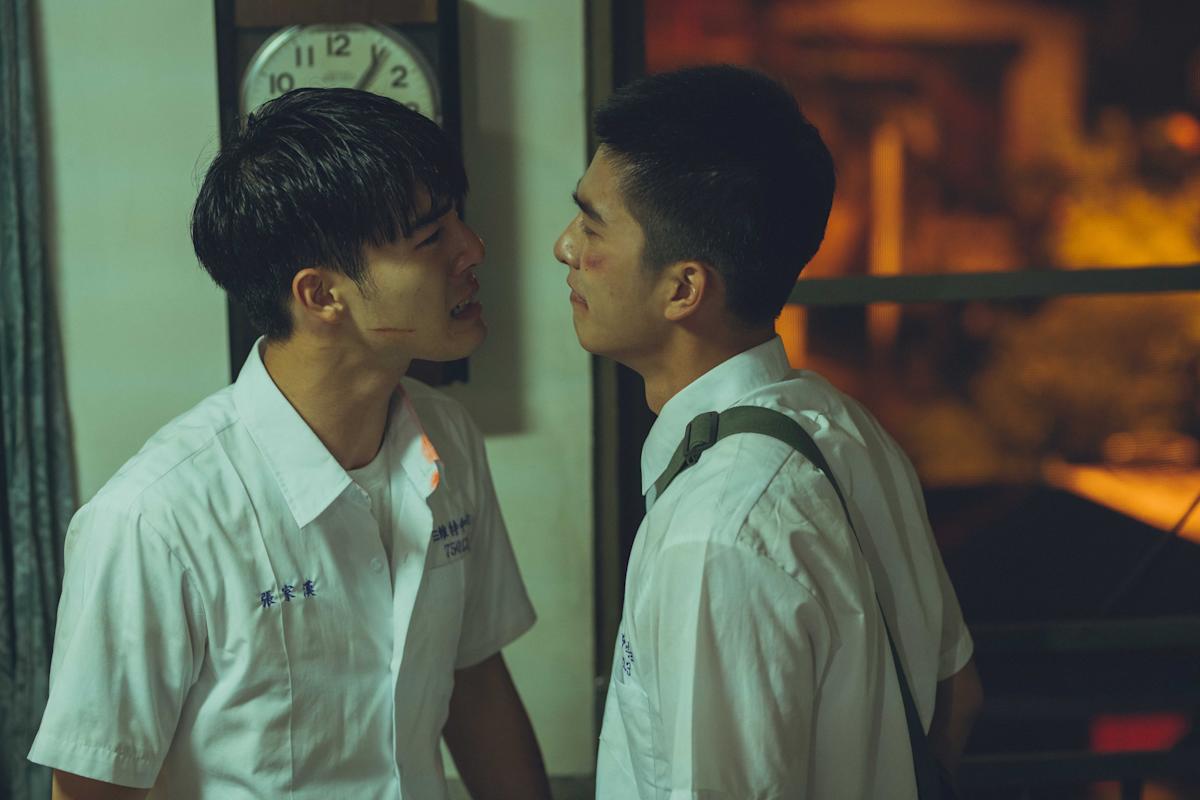 Set in the late 80s when there was political change in Taiwan, Your Name Engraved Herein is simple and straightforward, yet it has an uneven (and satisfying) depth to it. Was it a masterpiece aside from being a monster hit? Let’s see…

In a typical Taiwanese setting under Chiang Kai-shek in the mid-20th century – where conservatism rules – two young boys can’t fall in love.

Here’s the synopsis before I continue with my review:

As martial law ends in 1988 in Taiwan, two male students, Chang Jia-han (or A-han played by Edward Chen) and Wang Bo Te (Birdy, protrayed by Tseng Jing-Hua), meet and fall in love amid family pressure, homophobia, and broader social change. A new student, Birdy, arrives at an all-boys Catholic high school, where he and A-han soon become best friends; both are musicians in the school band, where they engage in antics while exchanging long glances. The school’s priest and band leader, Father Oliver, reminds the students to “profite de l’instant” (enjoy the moment), leading A-han to deepen his bond with Birdy.

Note 1: Immediately upon hearing the word ‘Birdy’, I remember the 1984 film starring Matthew Modine and Nicholas Cage. And I was right when it’s the same Birdy that one of the characters has described in this Taiwanese film – perhaps it was a sort of homage?

Note 2: A previously released review of this film was made before the end of 2020. Is this post redundant? I would say the beauty of this film has compelled me, new to LWG, to write another – and I’m not going to belittle the enormity of this film for the LGBTQ+ community in Taiwan or elsewhere in Asia.

Edward Chen, from Red Balloon, delivers a multi-dimensional performance as A-han. He makes us feel for this character in many ways – the joy of first love where its romantic notions and lust are equally satisfied. Then the agony of rejection and of saying goodbye. Tseng Jing-Hua may not be as popular as Chen in BL circles, but he matches Chen scene for scene. It is a good match, and they each have intense chemistry.

I’ll watch them in any BL series or other film should Taiwanese producers look for another project to satisfy our cravings. The sex scenes here are somewhat explicit, yet one feels guilty entering their ‘private zone.’ They both gave this seemingly haunting stare to the audience – as if saying, it’s private! Such delusions on the part of this reviewer! Both Chen and Jing-Hua are just great actors.

Executive producer and scriptwriter Chu Yu-Ning did not leave anything to chance. The “period” art direction, set design, music, the school setting, and the reunion all result in impeccable production values seen throughout. One is left breathless by the understated ‘spectacle’ of this movie.

The historical scenes in this movie are highlights as well, especially the singular protest/rally of a gay rights activist during that time. The campy boarding house reminds me of today’s backpackers zigzagging their way across Thailand or the Philippines.

While these are factual historical events, one can’t help but wonder – are today’s political issues in Taiwan as relevant as in the past? Even with the passage of same-sex marriage in Taiwan, Gay issues remain at the forefront in our so-called global community, and this film – even at 2 years old – remains timely.

Overall Rating: 5 out of 5 stars. [See our Review Guide]

Call It What You Want Season 2 – Reflection/Impressions

Call It What You Want – Season 1