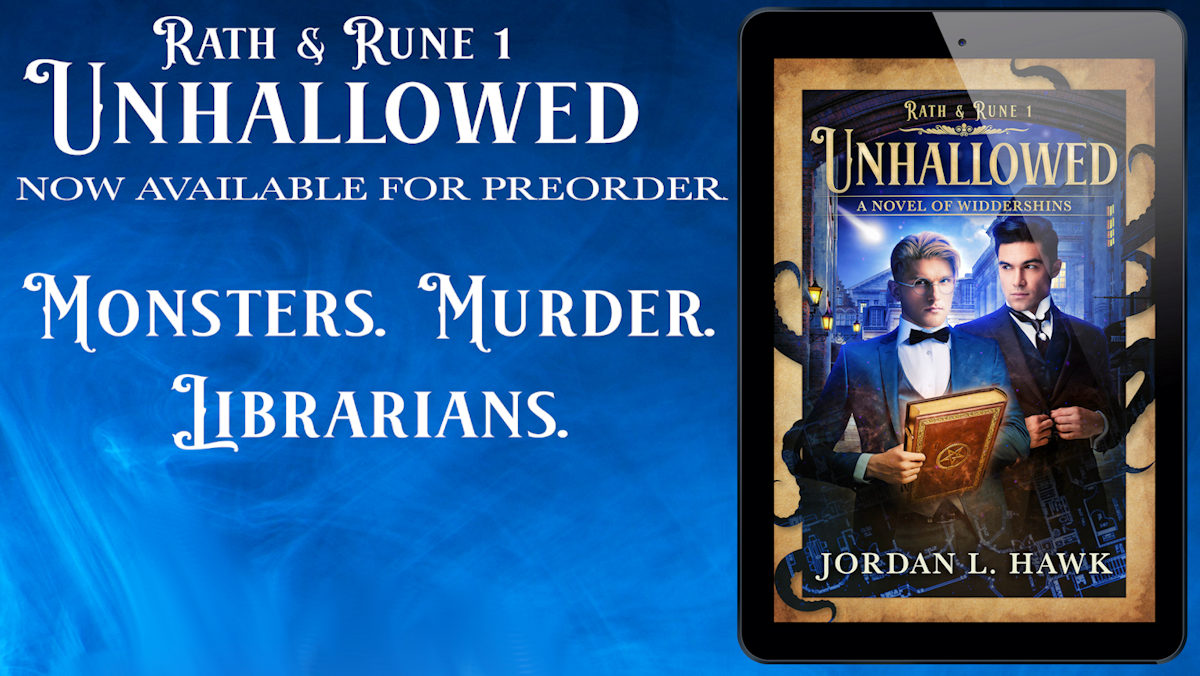 Jordan L Hawk is one of those few authors who manage to create an alternate universe that leaves you spellbound and flummoxed. I’m a huge fan of his “Whyborne and Griffin Series”, where he created a town full of wonders and arcane lines that draw its people closer and keeps their enemies far away. What fascinated me the most about this series was the way, Jordan Hawk gave substance to a town and turned it into an entity with feelings as well as emotions.

“Widdershins knows its own, in blood and spirit, breath and bone.”
I rarely remember quotes from the books I read, but this one will forever be etched in my psyche. I was totally devastated when the series drew to a conclusion with Deosil. Imagine my surprise when I chanced upon Jordan’s new spin-off series Unhallowed (Rath and Rune #1). Unhallowed takes place eight years later after the final battle of Deosil. I was hoping that we might get to meet Whyborne and Griffin and sorely was disappointed by their absence, yet Unhallowed managed to keep me from putting the book down.

Set in the same wild town Widdershins, Unhallowed follows the adventures of Archivist Sebastian Rath and his love interest Vesper Rune as they battle the unknown forces hellbent on destroying their precious town. Let’s review and dig deeper into this amazing world where our heroes engage in an exciting battle with book spirits trying to escape the dungeon of their confinement.

Blurb
Monsters. Murder. Librarians.
Librarian Sebastian Rath is the only one who believes his friend Kelly O’Neil disappeared due to foul play. However, without any clues or outside assistance, there’s nothing he can do to prove it. When bookbinder Vesper Rune is hired to fill the vacancy left by O’Neil, he receives an ominous letter warning him to leave. After he saves Sebastian from a pair of threatening men, the two decide to join forces and get to the truth about what happened to O’Neil.
However, Vesper is hiding secrets of his own, ones he doesn’t dare let anyone learn. Secrets that grow ever more dangerous as his desire for Sebastian deepens.
The fact is Kelly O’Neil was murdered. And if Sebastian and Ves don’t act quickly enough, they’ll be the next to die.

It has been eight years since Whyborne and Griffin saved the town, and quite a lot of things have invariably changed. This series focuses on our fearless army of Librarians at Nathaniel R. Ladysmith Museum. To those who haven’t read the series of books, the Museum has a distinct library full of books related to necromancy, sorcery, and other arts. We have several new characters, albeit some from the former series resurface as well. Like Mr. Quinn, the head Librarian as well as Sebastian. I was actually surprised that Irene Endicott is now working at the library. We are introduced to the turmoil of our central characters, Sebastian & Vesper. Sebastian is hell-bent on determining the reason behind the sudden disappearance of his close friend Kelly O’Neil, the Binder at the Museum. He truly cares about Kelly and feels an inexplicable amount of guilt for failing Kelly’s mother. His family has been working as the Binder for generations, and Sebastian was the first to deviate from the path.
Vesper Rune, on the other hand, has secrets of his own. He considers himself a monster, unworthy of existence, and the sole purpose of his existence is to safeguard his younger brother Nocturne. Noct is currently under the custody of Fagerlie, who wants Vesper to draw him the maps of the Museum’s library. Mr. Quinn hires Vesper temporarily, and Sebastian develops an instant dislike to the new bookbinder. Is it because Vesper took up the position that his friend held or the attraction he feels towards Vesper.

Our main character goes through a phase of discord, but an act of bravery gets them closer. Sebastian shares his concerns about Kelly’s mysterious death, and Vesper offers to help. At the same time, a mysterious force keeps calling out to Vesper and demands that he leaves the Museum as soon as possible. As they follow the clues left behind by Kelly, they figure out that the mysterious architecture of the library was planned by the Founder Nathaniel and his lover Dromgoole, the architect of the Museum. They also discover that Dromgoole sacrificed his own sanity to protect the town by binding himself to the cursed books in the library. One such book, “The Book of Breath,” which holds the spirit of necromancer Emeline, is trying to free itself. Fagerlie, on the other hand, has ulterior motives to obtain the same book in time for the arrival of the “Hailey’s Comet.”

Sebastian gets into trouble when some goons break into his house and target him as well as his family. Vesper has to revert to his true self to protect them. It is finally revealed that he is “Dark Young,” a mythical creature of the Woods, but he seems more human as compared to his brother, Nocturne. The rest of the story concentrates on how Sebastian and Vesper rescue Nocturne and fight the evil spirit as well as Fagerlie. They finally bind the book to Sebastian. Irene, along with her clan of Endicott Sorcerers, cordons off the area with their magic spells and curses. Three more books remain: blood, flesh, and bone. Mr. Quinn tasks Sebastian and Vesper to find the books before they cause any more trouble. The book ends on a happy note when Vesper Rune signs a blood oath to protect the secrets of Widdershins in the same way as his predecessors had.

My Thoughts About This Book

Unhallowed is written in the same indecipherable fashion for which Jordan L Hawk’s books are popular. The fantastical world that he built, coupled with their invariable romances and mysteries, manages to keep you captivated throughout. In “Whyborne and Griffin,” our central characters drew strength from the arcane lines of the Maelstrom or mythical creatures like the Umbrae. In this new spin-off series, however, Jordan focuses his energy on the invincible army of Librarians he created in the Widdershins universe. Mind you, they aren’t the normal librarians guarding the library books and being plain boring. The Librarians of this Museum are the Custodians of the town secrets and have fought alongside the heroes to protect their town. Mr. Quinn is my favorite character especially, and I absolutely love his devotion to Whyborne, whom he considers the extension of the Maelstrom.

Sebastian is an intriguing character. I love his conviction. Sebastian might not be too close to Kelly O’Neil, but still, he persists in searching for him because Kelly was his mother’s student. He feels an immense amount of guilt for letting down his mother, and with Kelly’s disappearance, he fears the last connection to her is lost.
Vesper, on the other hand, is the creature of destruction. He and his younger brother were born to herald the end of the world. However, he escaped the fate when he runs away from his mother and hides with his brother. Their lives would have been better if Fagerlie hadn’t chanced upon Noct and taken him into custody. Although he considers his physical appearance as unappealing, Vesper longs for love and affection.
Their initial meeting leads to sparks, and both deny the attraction. Sebastian dislikes Vesper because he doesn’t want someone else in his friend’s place. Vesper, on the other hand, considers himself a monster. But when unruly goons chase Sebastian, Vesper rescues him, and through a series of events, they get closer. A major portion of Jordan L Hawk’s books are filled with familial relationships. In this case, when Sebastian brings Vesper home, his sister Bonnie and the family wholeheartedly accept Vesper. Their relationship is tumultuous because the true reveal of Vesper’s nature makes him back away from Sebastian. But the Raths are persistent when they decide to love someone, and Bonnie orders Sebastian to bring Ves home. Despite knowing his true nature, they welcome Vesper into the family. After Vesper discloses the true motive of joining the museum, Mr. Quinn fires him, and Sebastian feels betrayed. But when you love someone truly, you can’t be angry with them for long. So they are back together fighting the evil spirit and trying hard to prevent its arrival into Widdershins.

Like the quote states, “Widdershins knows it’s own.” The entire story revolves around the Maelstrom with strong arcane lines that collect people. Vesper has been collected and added to the township. He is now part of their legacy, and it means we will get many more adventures in the future. The next book Unseen (Rath & Rune #2), will soon follow up. Keep watching this space for further updates.