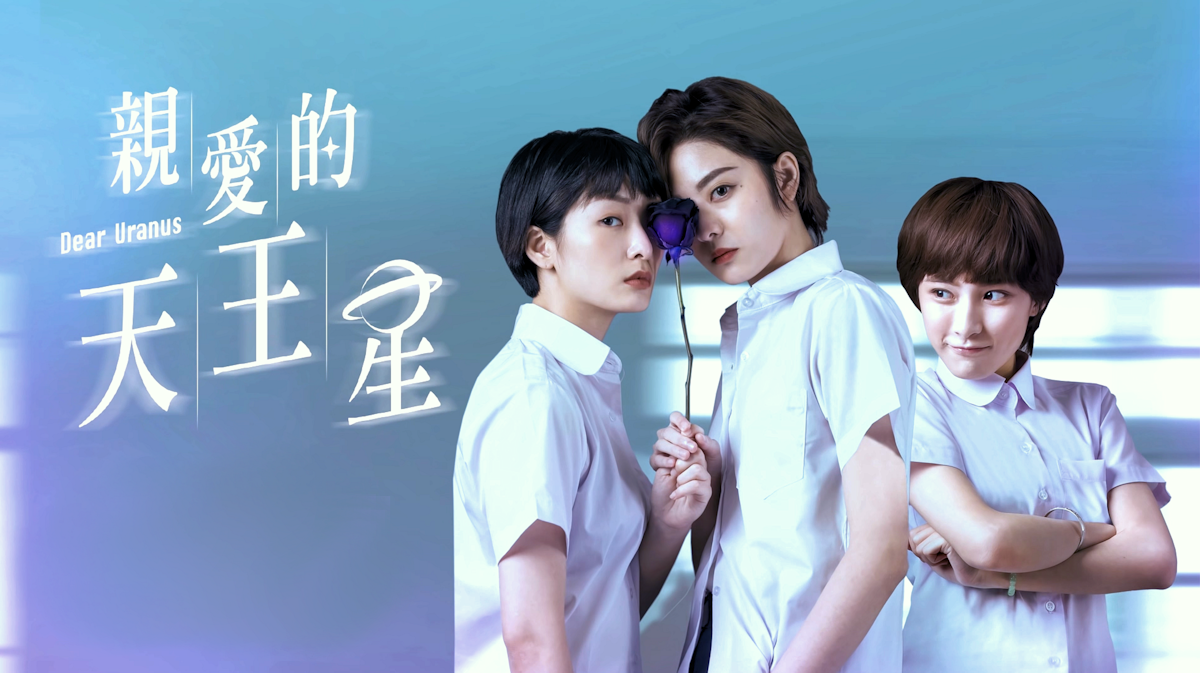 It’s been a while since we’ve had another GL to talk about here on LWGBlog since the superb “Chasing Sunsets” from our friends at Camp Avenue Studios, and reviewed by our very own Mals. This drama is the first Taiwanese GL (Girls Love) story produced and written by a Taiwanese married lesbian couple nicknamed Rabbit (Huang Ting Yu) & Wolf (Xue Yi Jie).

Dear Uranus is helmed by veteran BL Director Mi Chieh Tsai. She’s also directed HiStory: Stay Away From Me, HiStory 2: Crossing the Line, and HiStory 3: Make Our Days Count. I enjoyed all of them, except that the ending of MODC was horrible. However, I believe that the screenwriter, not the director, changed the final episode, so I will not hold it against her.

You can watch the series on their YouTube channel linked below. There are English subtitles for the episodes.

Do you still remember when we were seventeen; blushing faces, racing heartbeats for the first time, meeting the person we like. Would you take the initiative or watch in silence?

Played by 28-year-old Juuko Zhu.  She also had a supporting role in the 2019 Taiwanese drama The Next Top Star.

Played by Xue Yi Jie, also known as Wolf, who is also the screenwriter for the series

Played by Huang Ting Yu, also known as Rabbit. She is also the producer of the series.

It’s hard to tell a story with only three episodes with a combined running time of 32 minutes. However brief it may be, I did enjoy it.

(Editor’s Note: The subs conflict with other sources when it comes to character names, so we chose other sources.) The story begins with Yan Yi Zhen (the producer of the series), a beautiful, popular girl with tons of admirers, who tosses her hair & waves at her fans. She turns to go up the stairs to class but trips over the cascading empty water bottles falling down the stars. As she storms up to the top of the stairs, she spots clumsy & mousy little Wang Yi Qing. As Yi Zhen prepares to beat Yi Qing, Zhang Ruo Ning, a tall, striking girl, places her arm protective around Yi Qing, and the pair walk off.  You see quickly that Yi Qing has a huge crush on Ruo Ning. She is small, cute, clumsy, and quite adorable.

Ruo Ning is her opposite. A Taekwondo class member; she is tall, athletic, strong, and direct. She dresses in a more masculine style but appears comfortable with her feminine side, too, wearing makeup and earrings.

Ruo Ning also captures the attention of the bold and charismatic Lin Jing Chen. She is confident and sensual, using her charms on Ruo Ning. She’s intrigued by Ruo Ning’s straightforward personality. Jing Chen is reminded of her ex-lover when she sees Ruo Ning’s confidence.

We have Lin Man, Jing Chen’s best friend with benefits, who is the observer in the three girls’ dynamics but is firmly in Jing Chen’s corner, helping her pursue Ruo Ning.

The last character in our drama is Bai Zixin, the first lover of Jing Chen. She played the role of the pursuer to the then shy Jing Chen. She is seen only as a memory in this show, but she’s not easily forgotten.

The plot is pretty basic. Sexy, confident girl sees and is attracted to cool athletic girl. Another young, sweet girl has a crush on the same cool athletic girl. Who does the cool athletic girl like or choose? Other than dealing with parental expectations, the cool older girl doesn’t have much backstory. Same for the other characters. It could develop more if they expand on the story, fleshing out the characters. But it was a cute 30-minute story with enjoyable chemistry between the lead characters.

Of note, unlike many BL’s there is a scene that stresses the importance of consent. When Lin Jing Chen attempts to kiss Ruo Ning, Ruo Ning dodges the kiss with the whispered words, “I don’t like aggression. Next time, ask me first.” Here, a simple sentence that could be added to so many BLs. I was happy to see its inclusion here.

The ending ambiguous, so hopefully, there are plans to go forward with a sequel.  I hope we see more shows like this from Rabbit & Wolf.