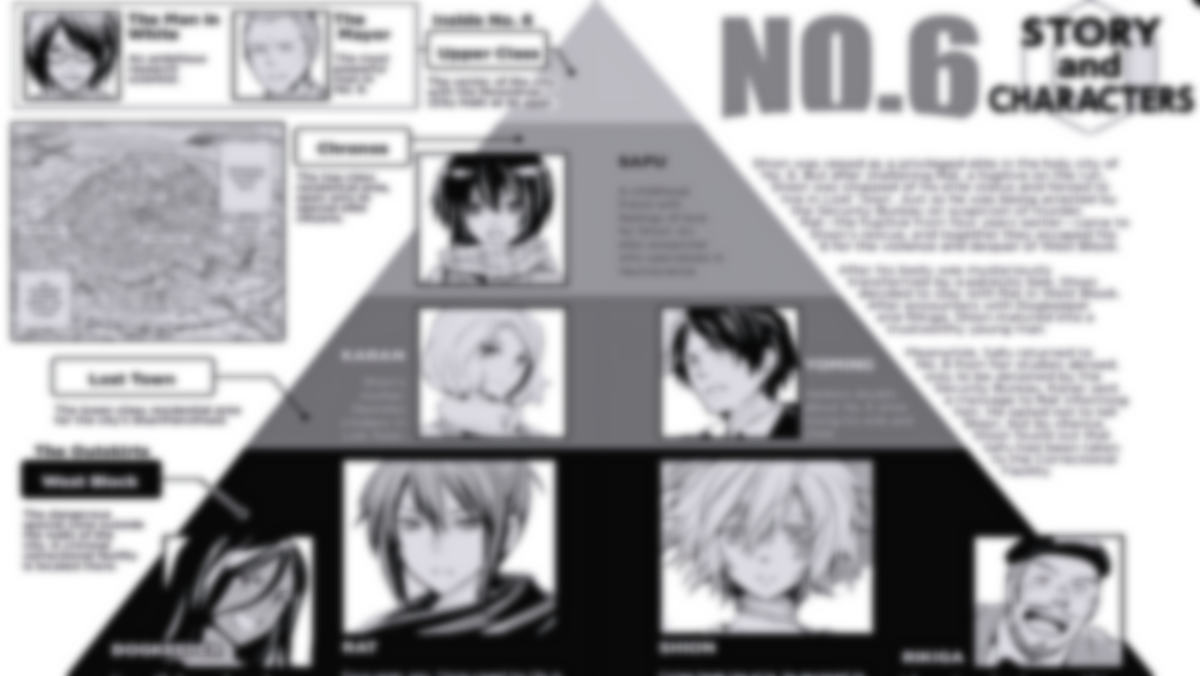 Anime by Studio Bones and Manga Adaptation by Kino Hinaki. All based on the light novel by Atsuko Asana

It’s been weeks since I’ve picked up this novel and story. I’ve decided my continuation will be a little different format. Instead of retelling the story and overall impressions, I will discuss the overarching story elements and their meaning in modern society. A bit different from the normal, but hey, when have I ever claimed that? 😁

We have two young boys in opposite worlds who meet by fate, chance, or destiny. I would say it’s fate. Shion is a bright young dreamer living in Number 6 with his head in the clouds. Nezumi is like his namesake, a street rat with a survival instinct, living a life by his wits alone. These two boys share a single night filled with wonder & curiosity. They meet each other, both of which are polar opposites, but somehow they are more than the circumstances in which they live. Nezumi and Shion are forever changed by a single night and the decisions made at that time.  The following day each boy’s life now spins down a different path from the previous.

Fast forward four years and strange things happen around Shion. Shion is a young man who is always looking at the world around him with curiosity. He lives his life with no regrets for saving the life of the criminal Nezumi that day. Unbeknownst to Shion, Nezumi lurks in the background, quietly watching Shion via his mechanical mice. Nezumi swoops in and rescues Shion when Shion is arrested.

From that point forward in the story, Nezumi becomes Shion’s guide into the world outside of Number 6 and the other numbered cities. The West Block is a land where everyone struggles to survive amidst lawlessness and poverty. The two worlds inevitably collide, leading to a dramatic change in both lands.

On the surface, it would be easy to assume this tale is about the wealthy versus the impoverished. However, that would rob this rich narrative about society, technology, ideals, perfection, man vs. nature, and more.

Number 6 is touted to be the best-planned city, the ultimate pinnacle of happiness and harmony among its people. What does it take to achieve this level of perfection? People born into Number 6, no matter what status they have, are privileged. They are fed, clothed, housed, and have access to healthcare. Everything is orderly. Or as much as it can be. It seems to be everyone’s dream city. But is it?

We, as humans, know that if something appears to be too good, then there must be a fault within. Perfection is unattainable. Number 6 on the surface appears to come close, though. Things are monitored remotely by cameras. Imagine British CCTV but on a much larger scale. Would you give up privacy to keep yourself safe and secure? Also, by swearing loyalty to the city every day, does that mantra truly help foster sincere loyalty from its citizens? The people of this city seem to accept these impositions as typical elements of a highly evolved functioning society.

However, as in this narrative, there will always be the ‘Shion’s’ and the ‘Safu’s’ in society. People whose curiosity can never be hindered. These people wish to know how things work and why. By placing these people at high privilege levels in the community, the city uses its thirst for knowledge to further its agenda. And what might that be?

As someone once said. Power corrupts; absolute power corrupts absolutely. People in the highest position of authority, whose actions are never questioned, develop methodologies to keep themselves in complete or absolute control at all costs.

So when people question absolute authority, how will those in power treat it? As treason, of course. Shion asks his coworker why the city would cover up the man’s death. When he asks this question, his colleague glances around nervously, shushing Shion. Then suddenly, the man withers and ages before dying at Shion’s feet. Suddenly a wasp emerges from the back of the man’s neck. The parasitic wasp flies away. Shion is arrested for treason soon after this. He is scheduled to go to the correctional facility to be reprogrammed, one assumes.

There is something wrong, something rotten from the inside. The wasps inside the people of Number 6 are the machinations of the autocracy in place, using its citizens to boost their wealth, consuming any value those citizens might have, up and to the point they are of no use, then throws them away as if refuse. This callousness is illustrative of how they handle people. When you get too old, you are sent to a home where you spend your days and others waiting for God; to die. But do they? When it’s time, are the elderly thrown away as well? What happens to people in the Correctional Facility? Why are they never seen again?

Once Nezumi and Shion flee to the West Block after literally swimming through the town’s shit to get free of the city, Shion discovers a messy and chaotic life. However, this life is unlike anything he’s experienced, like seeing a full-color world after existing in one of black and white. He learns about poetry, dancing, prostitution, gambling, the real attributes of life, all the things that make life come alive. To truly live the full experience that is life, you must first be able to feel all of the emotions that come with it. Nezumi becomes his mentor/protector and guides him through life in the West Block. However, this relationship is not one-sided, but more Sympatico. Shion teaches Nezumi there are more ways to battle the corrupt Number 6 than to simply destroy it. Shion looks at the two worlds and comes up with the best solution, break down the wall that separates the two worlds. Let the people who need food and shelter come in, and let those trapped in a gilded cage get out. Then the residents of Number 6 and the people of West Block will learn from each other, coexisting in a world without borders.

Man versus nature is a theme repeated by the mother Wasp, the one they call Elyurias. She has power, the power of song, which can heal and influence others, controlling their minds like a true queen. She lived among the forest people of which Nezumi is a descendant and member of that village. They maintained harmony within their land by honoring the queen with sacrifices every year, and she granted them prosperity. Unfortunately, the scientists who created Number 6 wanted her power, and during the hunt, they destroyed the forest, killing its people and capturing Elyurias. She became the center of calm and tranquility used and hidden by scientists to achieve a utopian society. These higher-ups would also sweep through the west block, capturing and dumping people of West Block as though they were thinning a herd of deer. They used their bodies to fuel their experiments and others who went to the correctional facility. Just like the forest people, they were treated like animals, not human beings.

But nature cannot be tamed forever. Eventually, there will be a revolution and a revolt, a reckoning for past crimes committed. Elyurias is freed, chaos reigns, and only the surviving forest member Nezumi and his love Shion’s song can stop Elurias from wiping out everyone in Number 6. Shion is hope, a new way to live, and Nezumi is the past, the wild nature that yearns to sing, dance, and be free. Elyurias stops with Shion’s promise to right the wrongs done inside Number 6. As the walls come down, the people come together. Shion is in charge of rebuilding a fair and just society, not a false utopia. And Nezumi decides to explore the world, singing the song of the forest people. Yet we are sure they will be back together. They are fated mates, two sides of the same coin, who complete each other.

Love can’t be controlled. It doesn’t fit the boxes you outline for it. For all Shion and Safu’s similarities, love and sexuality can’t be forced upon Shion. Safu ends up heartbroken as the man she loves is gay. Shion is, in my opinion, a gay demisexual. Despite his emotional closeness to Safu, the attraction didn’t exist. Nezumi was bisexual, comfortable with his feelings for both genders. The deep connection linking the two men allows Shion to understand his feelings of love towards Nezumi. We also have Inukashi referring to himself as a male even though he was born female.

No one shamed or ridiculed any of these characters in regards to their identity. None of these issues were played up as abnormal in this society. Their identity wasn’t used for comedy or to reinforce stereotypes. I enjoyed their inclusion seamlessly into the story. I suggest reading this if you have the time. It’s fantastic. If you don’t have time but still want to enjoy the story, anime and manga are easier to digest. The manga has nine volumes, and the anime has eleven episodes. If you made it to the end, thanks for reading. I hope you give Number 6 a try. It’s worth your time.