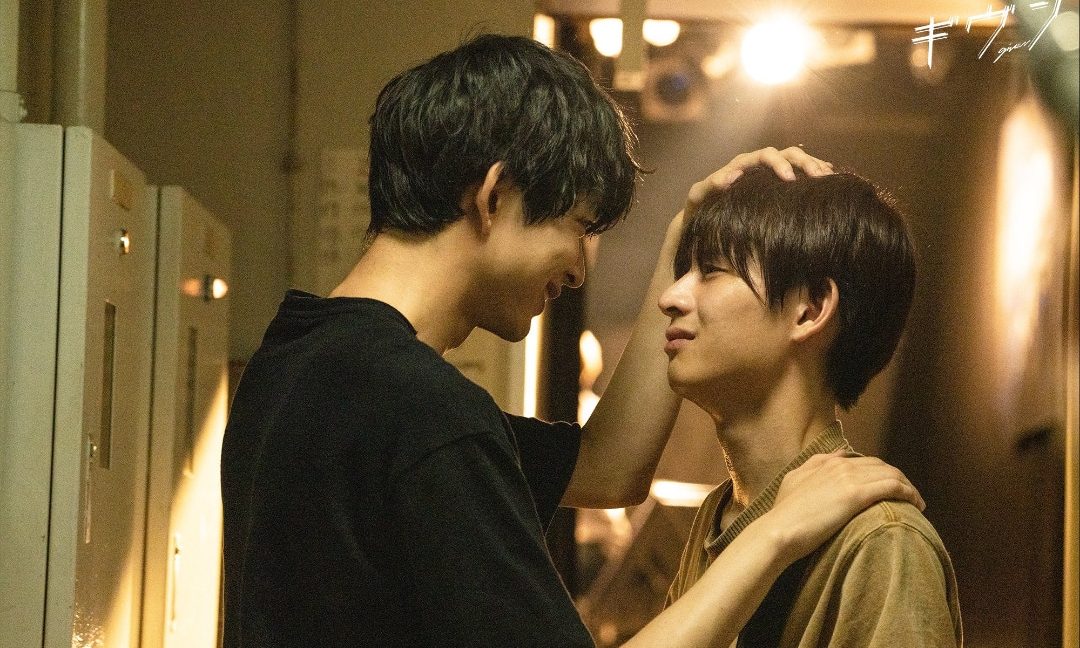 At 6 episodes of less than 30 minutes each, the live-action adaptation of the manga Given (ギヴン) by Kizu Natsuki, comes to life – with angsty and inspired performances from the leads. Easily two of the most photogenic Japanese actors playing BL – Suzuki Jin, who plays Uenoyama – the accomplished guitarist – is a highly regarded actor, while co-lead star Sanari (Mufuyu) is a sought-after rapper and vocalist, who is slowly carving his place in the Japanese music scene. So the drama series is good then? Let’s see…

This ‘series impressions’ is focused on the acting and cast, with some mentions of the technicality. Let’s see what the series is all about.

Tightly clutching his Gibson guitar, Mafuyu Satou (Sanari) steps out of his dark apartment to begin another day of his high school life. While taking a nap in a quiet spot on the gymnasium staircase, he has a chance encounter with fellow student Ritsuka Uenoyama (Suzuki Jin) , who berates him for letting his guitar’s strings rust and break. Noticing Uenoyama’s knowledge of the instrument, Satou pleads for him to fix it and to teach him how to play. Uenoyama eventually agrees and invites him to sit in on a jam session with his two band mates: bassist Haruki Nakayama (Yanagi Shuntaro) and drummer Akihiko Kaji (Inowaki Kai).

The ordinary stuff ends there, and the story continues like this:

Satou’s voice is strikingly beautiful, filling Uenoyama with the determination to make Satou the lead singer of the band. Though reticent at first, Satou takes the offer after an emotional meeting with an old friend. With the support of his new friends, Satou must not only learn how to play guitar, but also come to terms with the mysterious circumstances that led him to be its owner.

When news spread about the live-action adaptation of Given, I was concerned about who would play Mafuyu. As a fan of the original anime, I find his character to be this fascinating, negatively-driven, shy youth who can’t express himself clearly. His previous intense (albeit tragic) relationship with his childhood friend hovers like a haunted spirit – adding another layer of anguish to his persona.

Rap artist Sanari captures some of Mafuyu’s ‘essence’ – which greatly satisfies me. His on-screen chemistry with Suzuki Jin is not bad either. Such tenderness exhibited between them that turned volatile in an instant – lends credence to the complex relationship between the two.

Suzuki Jin is at his element here. There are some scenes that appear wrought with over-acting, yet I can appreciate that Jin wanted his character to be this serious, matter-of-fact guy who loves someone yet appears hesitant to express himself—exactly like the anime character! He reminds me of one favorite J-actor, Gou Ayano!

The Japanese have been described by some as capable of limitless ‘bad acting’ vibes. I think it’s just a matter of taste or culture.

14 years ago, co-star Inowaki Kai was cast in the critically acclaimed film Tokyo Sonata by dir. Kurosawa Kiyoshi, where he plays the piano. In Given, he plays Kaji Akihiko – giving the character flesh and blood. The series spotlight may not be thrown at him, yet he manages to shine in this endeavor. Certain scenes give him more than just acting opportunities to offer his on-screen aura. If you’ve seen the anime (and read the manga), then you know Akihiko is also gay.

The piano accompaniment every time there is drama heightens it with such force and sentimentality. I’m not sure if I like it at all. Though the pacing is quite appropriate for a drama this short in duration. Those close-up shots featuring Sanari are dreamy, bordering on obsession!

Series dir. Miki Koichiro, known for previous BL series Pornographer (2018) and Mood Indigo (2019), elevates this mini-series into a passionate drama filled with youthful energy and positive vibes. The band scenes were major highlights (offering both hilarious and thoughtful moments) and Episode 6, featuring the band playing on stage, is captivating and memorable!

Only Japanese Yaoi creators can come up with such musicality and youthful boy band energy as in Given- since they started it all, anyway. If you loved the anime on which this mini-series is based (or inspired by) and appreciated the manga, then this is a wonderful companion to complete the experience.

Overall Rating: 4 out of 5 stars. [See our Review Guide]