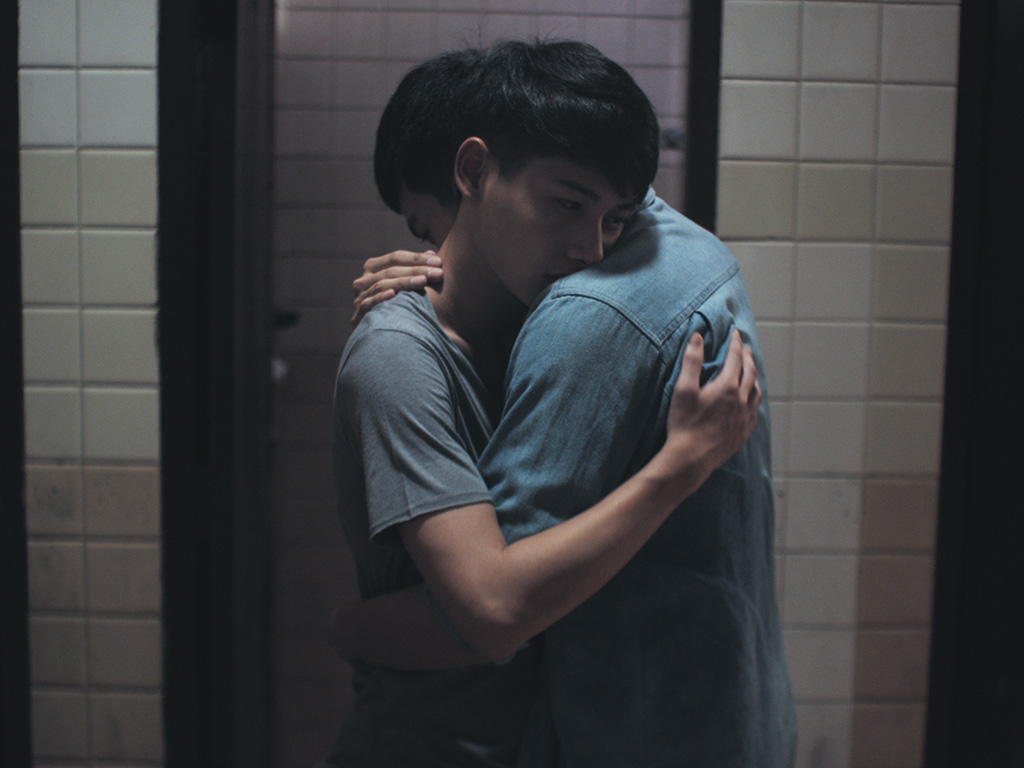 The directorial debut of Anucha Boonyawatana The Blue Hour serves as a note that there is a new “kid” on the block in the Thail film industry. Apparently, he has a taste for style and shock.

Thai media considered The Blue Hour as one of the three exciting new gay movies to have come out this year – How to Win at Checkers (Every Time) and Red Wine in the Dark Night are the other two. Josh Kim’s Checkers and Boonyawatana’s debut film both premiered at the Panorama section of the 65th Berlinale to much acclaim. But bear in mind we are talking about two extremely different films here, and both are visually satisfying and completely engrossing.

Picture this. A film equipped with an eerie piano and music accompaniment. Color-graded to a dominant bluish-tinge screen throughout, and Gun Atthaphan‘s androgynous beauty and his role as the bullied gay guy.

Tam (Atthaphan) is often attacked at school, has no real friends, and even gets discriminated against by his own family because he’s gay. Getting tired from pleasing his Mom, he hooks up with a slightly older gay boy and has sex (of all places) in an abandoned building. Complete with a swimming pool and mysterious black “figures” that appear to have sprouted from its walls, the guys have found the perfect place to explore and be daring.

Phum (Oabnithi Wiwattanawarang) may be slightly older, but Tam also asserts his own brand of “superiority” by being frank and bold. Their first sexual encounter is like being on an intimate battlefield, if ever there is one.

There is an immediate spark between the two, and they begin to meet secretly soon after. Phum, who has already left the safety and security of his family’s home, will take risks to survive, while Tam knowing fully well how much he’s detested at home, has nowhere else to go as he commits a serious offense, one that would affect his future.

So if I’m gay and I’m not successful in life, does that make me the scum of the earth? I don’t think that’s fair… it’s not fair at all… – Phum (Oabnithi Wiwattanawarang) as he stares at Tam, who just got bullied a few minutes ago – The Blue Hour.

I have not mentioned the ghost story until now – since, obviously, the abandoned building is said to be haunted, but it serves more than just a metaphor or a side story to an already interesting plot. It’s here where most of the crucial scenes in the movie take place.

Oabnithi, as the older, more experienced Phum, lives up to his growing reputation as a dedicated actor. But it’s Gun Atthaphan who captured my imagination. Under the superb direction of Boonyawatana, Atthaphan abandoned all sense of formality and dived into a character that may appear weak and abandoned, yet capable of committing a horrible crime.  At the ‘ripe’ age of 21, playing Tam is his most daring role to date.

The thing is, while a lot of the Thai BL movies of late (think Love’s Coming and My Bromance) settled for drama and a predictable ending (happy for Love’s Coming and a tragic one for the latter), The Blue Hour explores a young gay boy’s dark psyche and challenges the viewers to think more deeply.

There is no over-acting here, nor is there too much tragedy added just for dramatic effects (like My Bromance) or too sweet and sugary scenes (like Love’s Coming). Incidentally, Gun replaced one of the lead actors (Suttinut Uengtrakul, who played Gump) in the Love’s Coming sequel, so our young and fearless actor tries another gay role, this time the romantic, cute type.

The Blue Hour is supposed to be the last episode in the horror TV series, Thirteen Terrors, but it’s completely in a class of its own. However, let me get this straight (no pun intended): at 1 minute shy of 100 minutes, certain scenes could have been cut. It could have been a more cohesive feature that offers dramatic and horrific elements done with many styles and altruistic (and otherwise) intentions.