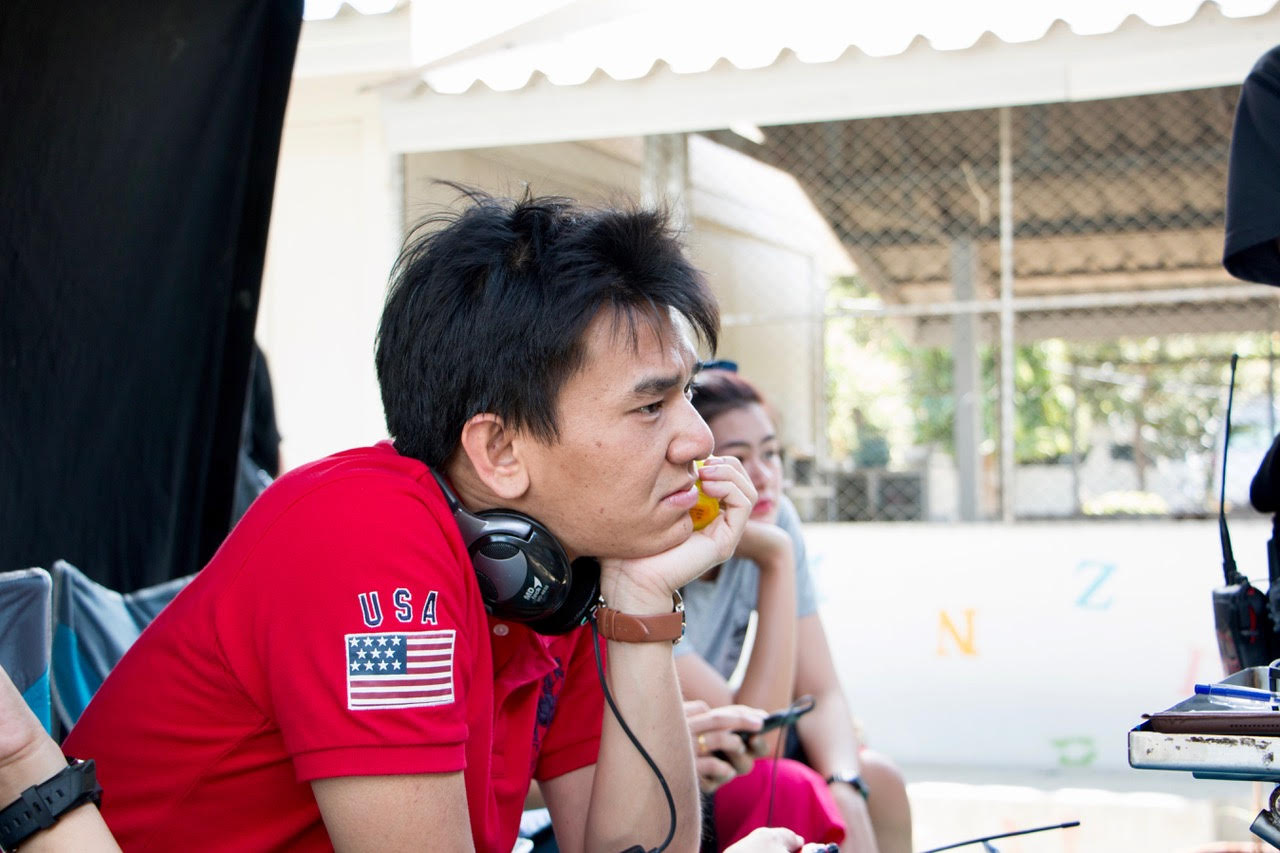 The film Present Perfect by Anusorn Soisa-ngim feels both Thai and ‘not Thai’ to me. Being so used to Japanese movies where silence and slow pacing are the norms, I thought I was watching a Japanese Indie film!

About a week ago, it was announced that Soisa-ngim will take charge of the 2 Moons 2 The Series. Apart from the international success of his films, it is now obvious that the Thai filmmaker has entered a new field – TV series, as director. With his name thrown into the spotlight, he gets to decide the next trends in Thai BL.

In this interview, we asked Soisa-Ngim some questions about filmmaking, casting, Boys’ Love, and much more!

First of all, congratulations on the success of your film Present Perfect. It is a very emotional movie, and you made the actors perform their best. Can you give us some information about how this film was made? What was the inspiration for the film?

Thank you so much! This film was very personal because it is based on my experiences. I didn’t plan to shoot this film in Japan initially because we believed Japan would never support LGBTQ films. However, thanks to Mr. Nuttachai Jiraanont, he made my dream come true. The Higashikawa Governor funded this film for us! So we had to fly to Japan for the shoot.

The Present Perfect YouTube video has reached more than 2,800,000 views. Before that, you mentioned that you were worried that not many would watch it. What do you think are the reasons why it’s so successful now?

When I launched this film in Thailand, it seemed no one cared! We got only 8 cinemas around Thailand to feature the film. We don’t have any superstars in the film with a no-name director. Who’s gonna care about Anusorn Soisa-Ngim? And it doesn’t look like a Thai film because it’s a slow film – Japanese style. However, it went on to become quite successful in Taiwan. I was so happy about that, and then we attended many film festivals. After one and a half years of release, we decided to launch it on YouTube. We got so many viewers, and most of the comments said they loved the film, so we were so surprised.

How did the casting process work for Present Perfect? Did the actors who play Oat and Toey audition? Did you know the actors before the film? Why did you select (Ice) Adisorn Tonawanik to play Toey? How did (Joke) Maroukasonti Kritsana get the Oat role?

Me and Adisorn, we’ve been friends since University, so I know his personality – that he’s always moody and sad. That’s why I picked him.

Kritsana attended the casting call. I have been in love with him since I saw him for the first time. However, he had the worst acting skills, but I didn’t care! I needed someone that people would love, at first sight, so we trained him for 3 months before we flew to Japan.

Did Commetive and Dir. P’Aam Anusorn decide on a sequel for Present Perfect before or after its popularity?

Nope, but now I plan to do Past Perfect and Future Perfect!

On Twitter, you said that you are a hands-on director; you don’t sit and then shout to assistants and tell them what to do. Is it difficult to be a director? Will you get another job if you have the chance? Who is your inspiration for films? Do you admire any directors?

I can’t sit longer than 3 minutes, so I run around the set just to make sure everything is all right. I am a very detailed-oriented person, but I don’t mind a little imperfection.

I love being a director. I think a director has an easy way of telling a story. I don’t have a role model. I used to have a few, but they turned out to be monsters, especially when I got to know them! (all filmmakers are weird, and I think I’m weird, too, haha).

I admire lots of musicians like Britney Spears and Taylor Swift (it seems weird, right?) I love the film called Your Sister’s Sister by Lynn Shelton.

Any clue about the Present Perfect (Part 2) film? Can you let us know something about this new movie? Just some small hints. Are you going to cast other actors too?

There will be 2 more films. I will make Past Perfect and Future Perfect.

2Moons 2 The Series will have new actors. There were some problems, but the show must go on. Can you confirm if this will be shown in April 2019 or some other date?

It should be around April or May. [Episode 1 is scheduled for June 2019]

The new 2Moons2 The Series actors are the best! They work hard, and they are open-minded. They’re just awesome! I hope the audience will accept me and the new cast. I’m sure that they will love this sequel.

Are young Thai actors not concerned about playing BL roles? It seems there are many Thai actors who auditioned for such dramas. Is this true? In the 2Moons 2 The Series audition, how many actors participated? How long did the audition go?

You know what? I don’t give a shit about actors who are concerned about playing BL roles. For me, they are not real actors. They are just good-looking guys with nothing much to offer.

A real actor must have an open mind and be willing to accept any type of role.

For 2Moons2 The Series, my guys will surprise many people. Hundreds of aspiring young actors joined the audition, and these are the ones I selected. I’m pretty sure that they’ve got talent and are more than just good-looking actor wannabes.

Do you agree that a TV series is the best way for actors to engage the fans and establish a network for their work as an actor? Or is a prestigious film a better way to make them popular and well-known?

I think both ways. If the film or the series has enough entertainment value and the actor is SUPER HOT, it will become popular.

But sometimes, I felt that the audience – especially in Asian countries like ours – loves to watch good-looking actors rather than focus on the story or consider production values. For instance, some drama series have poor production values with an equally terrible script but becomes are popular anyway. The reason for the popularity is the handsome lead actor. We don’t care if he acts like a robot; it’s all about the looks.

Anyway, it’s okay; I’m not against that handsome actor because I also enjoy watching him. For 2Moons2 The Series, I wanted great acting skills, an awesome script, excellent production values, and of course, the actors had to be handsome.

However, I want to stress that being handsome is not enough. They need to identify with their characters.  I don’t want robots in my series. I want this to become my mission: to level up the acting in Thai TV series.

As a director and producer, you are involved in filmmaking’s business and artistic aspects. Is that correct?

Yes! And it is a very fucking hard job. HAHA.

Which do you prefer – doing a shooting for a film that will run for 1-2 hours or a drama series that will be broadcasted for at least 10 weeks?

I’m still thinking about that. Let’s see if I have fun with 2Moons2. If I do, I might make another series. Making films requires a shorter timeframe, but the process is very detailed. Making a drama series is easier, but it takes a lot of time.

What is your opinion of the Thai film industry? Is it competitive like South Korea or Japan?

It’s hard to become successful in Thailand if you are an independent film company. Thai people don’t care much about awards or the quality or content of the film.

But we still respect them. They have given great contributions to our film industry.

Commetive Production is a Thai film company. Do you employ or partner with directors and scriptwriters? How can a new (or unknown) Thai filmmaker work for your company?

I love young filmmakers! They always come up with very fresh ideas. I don’t hire them as employees because I believe that these people who work on creativity can’t sit on a chair and imagine all those screenplays. They have to travel and make mistakes and have fun in their lives.

So how can a Thai filmmaker work in my company? They need to bring in fresh, big, different ideas.

What kind of movies do you specialize in?

We specialize in all kinds of films except action-packed ones or those with lots of special effects – we don’t do those films.

What kind of films will Commetive Production promote and produce in the next few years?

We will release our second and third films this year. They’re called “The Presentation” and “Bangkok Dark Tales.”