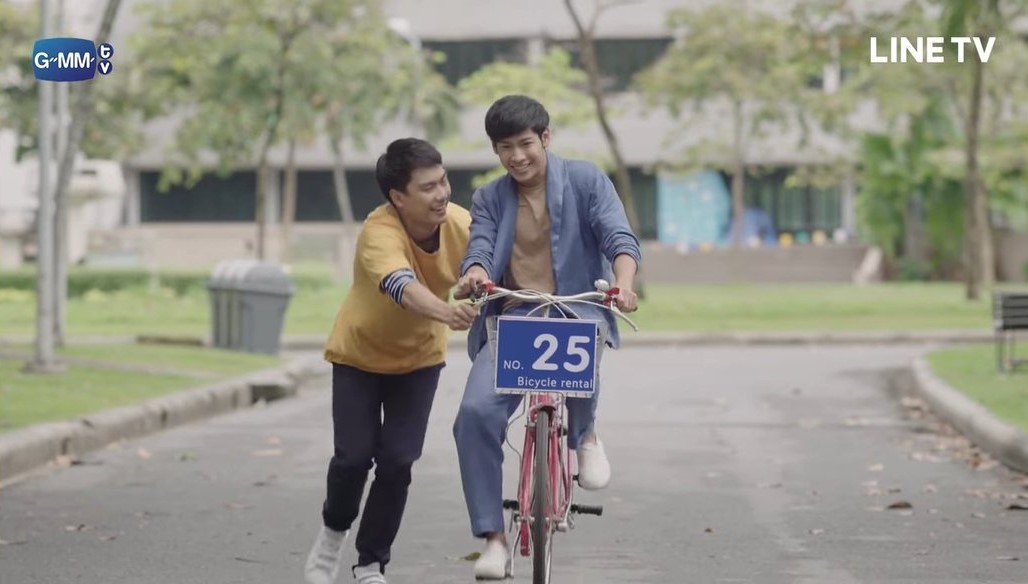 There is a new love team to celebrate in the Thai BL universe. They are Singto and Ohm, the leads in LINETV’s He’s Coming to Me.

Episode 1 digest is below

Also known as They’re Celebrating Qingming Festival Next To My Grave, the new series features a lonely ghost (Singto) who roams aimlessly between the land of the living and the hereafter. By coincidence, he met a young boy (Ohm) who has the ability to see his physicality. They grew closer together. What started as friendship turned deeper when the ghost falls for the other boy.

Singto Prachaya who rose to fame via SOTUS comes into a full circle as a lonely ghost named Met. For years, he roams the local cemetery. It appears that he is aimlessly searching for his own identity. He met Tunwa (Ohm) who has the ability to see him. It started when Tunwa was just a kid. Through the years, the young boy visits his ghost-friend. The two developed a close friendship.

Ohm Pawat who was cast as the second lead in Make it Right plays Tunwa. He is an ordinary young Thai who is experiencing the pangs of young love. He also faces the challenges of going independent, first-time intimacy, and friendship. Mac Nattapat Nimjirawat, an eleven-year-old child actor, plays the younger version of Ohm.

A Special episode airs 6th March. It shows behind-the-scene footages and interviews with the cast.

Singto Prachaya who rose to fame via SOTUS comes into a full circle as a lonely ghost named Met. For years, he roams the local cemetery. It appears that he is aimlessly searching for his own identity.

Episode 1 was released a day after. At less than 1 hour, the premiere episode offers so much to digest. It was comedic, emotional, mysterious, and fulfilling at the same time.

The Qingming Festival also referred to as the Pure Brightness Festival, pays respect to ancestors and celebrates the warming weather of spring. It’s a time for honoring the past with a spirit of celebration that includes space for both reflection and renewal. [You can read more here]

I have never been so excited about seeing two Thai actors playing together as ‘friends’. Such friendship, of course, has so much potential for something even deeper.

The episode begins with Met (Singto) listening to pop music, reminiscing of a special family gathering when – all of a sudden – he suffered a heart attack and dies.

Fast-forward to a cemetery. Met looks helpless (and jealous) as visitors to other graves populate his once silent sanctuary. It all changed when a young boy visits his grave. The young boy (Mac Nattapat Nimjirawat) becomes a frequent visitor until he could – actually – held the ghost during an emotional outburst.

The boy who is now a young man (Ohm) demonstrates his familiarity with his ghost friend. Their conversation which started so casually becomes intimate. What’s in store for both of them?

Reminiscent of the Japanese anime Natsume Yuujinchou where our hero is the butt of the joke. It’s not easy talking to an invisible friend. In this case, Tunwa’s the only one who can see Met. Thus, he would appear ‘crazy’ to passersby.

I felt that both Singto and Ohm have grown in the acting department by delivering subtle, understated performances. Unlike previously, they both appear natural, swiftly going into emotional and funny moments with ease.

Ohm Pawat who was cast as the second lead in Make it Right plays Tunwa. He is an ordinary young Thai who is experiencing the pangs of young love. He also faces the challenges of going independent, first-time intimacy, and friendship.

Ohm’s transformation is particularly dramatic. Perhaps he has become aware that his good looks and mischievous smiles are no longer enough. Such a conscious effort to develop his character is much appreciated.

Singto remains the star of the show, however. He singlehandedly carries the first 30 minutes of the episode. He introduces the audience to what would be the ‘look and feel’ of the show. His loneliness is almost palpable as if we can ‘touch’ his pain.

The flashback to the past may hold the key to who he is or was. That offers enough hint that this drama has more substance than meets the eye.

The episode pacing is relaxed. I felt that they could have edited it since there was some fat that could have trimmed Ep1 to less than 30 minutes. I understand that they want Ohm to appear halfway in the Episode, but the impact nonetheless is there.

The scenes showcasing Ohm and Singto were top notch!

Episode 2 teaser vid is below:

Have you seen Episode 1? Let us know what you think! Do you fancy supernatural BL romantic drama?