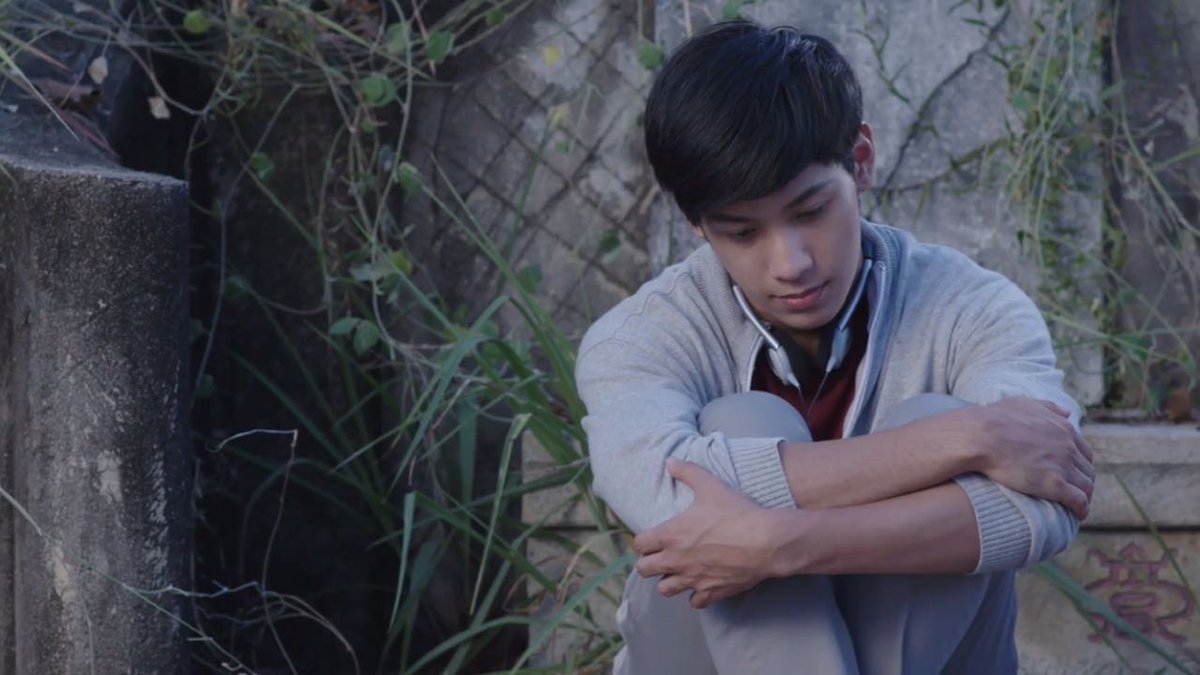 The Ohm-Singto ghost-bromance-BL drama, He’s Coming to Me, is about to end in 2 upcoming episodes. The series – thus far – has exceeded all of my expectations. For a drama that tells the tale of a lonely ghost who befriends an even lonelier human, it has a lot of heart! And the drama! – more than I could possibly bear.

Here’s what we know so far:

A definite highlight of the series. Thun kisses Met in the most tender of ways! He’s Coming to Me, as a drama, will be remembered as the romantic launchpad of Ohm and Singto. Are they the next big BL couple with tremendous star power?

But let’s ask the question: How could the human fall for the ghost?

Met (Singto) returns to the cemetery to ponder about his fate. Is he coming back to Thun or is he going to disappear forever?

Well, Met is no ordinary ghost. He’s very thoughtful, has this positive demeanor that inspires others to be good and nice, is honest yet also has his naughty side. That’s boyfriend material already!

How could the ghost fall for the younger guy? I think the answer is also quite simple. Thun, notwithstanding his stance as a loner, is as thoughtful as Met. He showers anyone special to him with cheerful thoughts and extends such feelings with gifts, among which is his time. How could the ghost not fall for someone who likes to be with him all the time?

So the drama continues as Thun’s mom makes a visit, yet Thun remains an emotional wreck as he ‘mourns’ Met’s disappearance. An important past relationship serves as Episode six’s explosive reveal. Ohm also reveals something personal about himself to his mother.

Ohm’s emotional outbursts are as painful as anyone who has lost the most important person in his life. He also begins to alienate himself with his friends.

Met contemplates what he needs (or must) do as he stays away from Thun and settles back in the cemetery.

The Series’ defining moment – Thun’s Coming Out to his Mom. One of the series’ most emotional moment, and inspiring too!

The Wiki defines ‘coming out’ as follows:

Coming out of the closet, often shortened to coming out, is a metaphor for LGBT people’s self-disclosure of the sexual orientation of their gender identity. The term coming out can also be used in various non-LGBT applications (e.g. atheists). Framed and debated as a privacy issue, coming out of the closet is described and experienced variously as a psychological process or journey; decision-making or risk-taking; a strategy or plan; a mass or public event; a speech act and a matter of personal identity; a rite of passage; liberation or emancipation from oppression; an ordeal; a means toward feeling gay pride instead of shame and social stigma; or even career suicide. [source]

I think the writer and producer of the series have been respectful to the LGBT community in as much as they provide ‘milestones’ to the characters in terms of their individuality. These ‘milestones’ are directly related to an LGBT person.

While it is not totally indicated that Thun and Met are ‘gay’, their feelings for each other are more than enough to compensate for the lack of labeling.

Is this the same Ohm who uses his cute smiles to capture the hearts of BL fans in Make It Right? I’m not so sure. He has grown into a serious performer with plenty of acting chops! I think that the depth of his emotions is not only heartfelt but authentic. He is simply Thun – making the character all his own.

Singto, who I remember vividly, as the scholarly, yet defiant freshman in SOTUS, has turned a gentle yet almost poetic performance. As a ghost, he has transformed himself into a ‘being’ who has to endure loneliness in infinity. He has perfected his acting style in as much as he is Kongpob in SOTUS as he is Met in this series.

I have remarked so little about the supporting cast, but they are as competent as the two leads.

The teaser clip for Episode 7 is up!

So is Met coming back as in He’s Coming to Me? really!