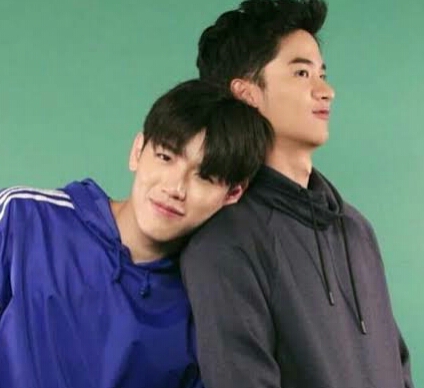 Episode 6 of Dark Blue Kiss can and will infuriate New-Tay shippers by AJ Chayapol who was extremely effective as Non. Portraying the younger guy who targets Kao as his romantic interest, he challenges Pete by way of intimidation and subtle show of innocence while scheming his way towards his target.

Described as a troubled kid, we have yet to confirm if he actually held the notion of romance with Kao. But you get the drift.

Sun and Mork continue their whirlwind romance while in search of a rare breed of coffee beans. They trekked the picturesque countryside in the tradition of Chimon’s Our Skyy.

Trouble seems to be Mork’s unwanted twin and it will show its ugly head to spoil what could have been their sweet moment.

The teaser clip for Episode 7 shows the brewing conflict between Kao and Pete and how Non schemes to break them apart – quite devilish this kid.

The complaint by some quarters of the slowness of pace (of previous episodes) will find the 6th installment to be intense and sensational.

While Pete continues to demonstrate his apparent hatred of Non in the presence of his friends, Non baits him nonstop and enjoys every moment. What a naughty and handsome kid he is!

I have been impressed by AJ (who happens to have a twin brother) even in their cameo at He’s Coming to Me. I love the acting of bravado and bloated ego – when you know he’s just a kid who worries about school and acne!

A favorite scene of mine features Pete with his Dad. It was both hilarious and endearing. A rare scene of familial connection involving condoms and teddy bear. Enough said!