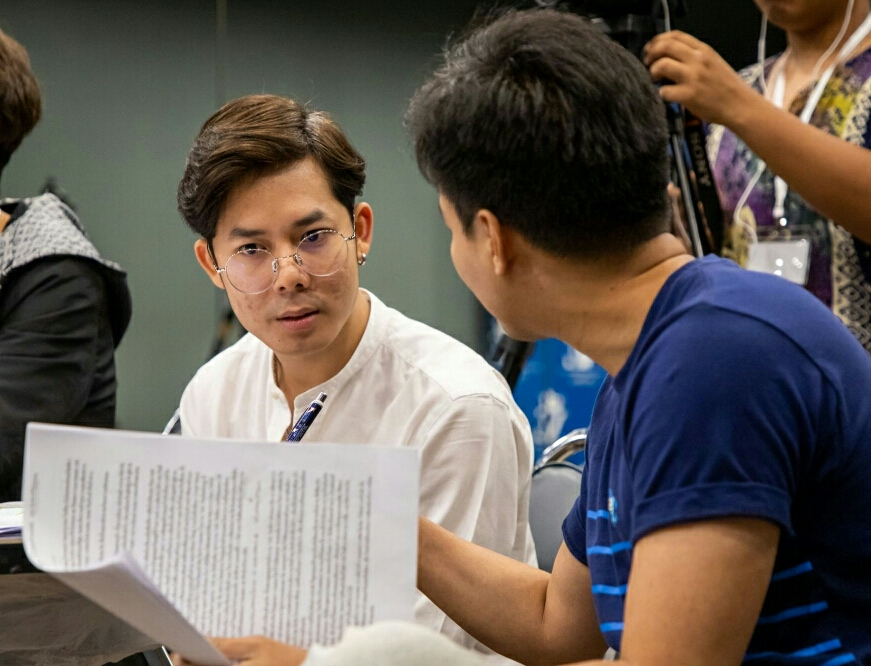 Director Nam left us with strong impressions as a principled man. He has spent many years to gain experience in the filmmaking industry. Now it’s his turn to direct his first drama series My Ride, I LoveYou and we got the inside scoop for you!

Tell us how did K10 Global become part of this (My Drive) project. Can you give us a background story?

Dir. Nam: K10 Global Content Co., Ltd. was founded by me and 2 other partners as a Studio for production of Films, TV or Online Series and Commercials. When we first opened the company, we were going to do “My Ride, I Love You” project, so I took this opportunity to make this series as our first project of the company.

As the founder of this independent entertainment company, tell us how you began this business. What is its first project?

Then I worked with Dir. Nitchapoom Chaianun on “Brother | My Bromance” project, which was the very first gay film of its genre before the gay films and series became popular.

After 6-7 years of experiences as Director, Producer, Scriptwriter and (sometimes) Co-Director roles, now it’s time to start doing things on my own to show who I am, so I decided to open K10 Global Content Co., Ltd. and started doing “My Ride, I Love You” project.

As a kid growing up in the 1990s what can you say about the progress of the Thai film industry and its treatment of the LGBTQ community?

In my opinion, gay films or the other LGBTQ films are always alternative films. Before someone pick the LGBTQ issues to make feature films, he must be quite confident that what he wants to present is good enough, so that people can reduce their gender biases and go to see the film. That’s how it was in the past.

For me, when the Thai film “The Love of Siam” came out for the first time, I didn’t know that it’s gay film until I watched it in the cinema. Then, I realized that it was actually a romantic film that talked about two guys, and it had changed my view of gay films since then. After that, there are some other gay films coming out but most of them are comedy. Until the time when gay films played an important role in Thailand because the demand of people watching this kind of film became more and more, film producers therefore saw the opportunities out of this and began to make gay films up until now.

I think LGBTQ genre can drive Thai films and series industry well while some other countries are still not opened like us.

Well, I think it’s kind of classic. Many 90s films became legend. I found that a lot of things back then were charming in its own way which is hardly found in this era. Nowadays, though people try to bring back the classical stuff they like from 90s to be shown again, it’s nothing compared to the real experience I’ve been through when I was growing up in 90s.

What is your filmmaking process?

When I first started my career path as a filmmaker, the very first teacher of mine was M.L. Panthewanop Thewakul. I’ve learned a lot from him, like what he thinks, how he works, I might say that I’ve been influenced by him a lot, but our styles are still different and I also have my own way of thought. I’m quite a serious person when it comes to work; I really value thoughts and details in every project I do. I believe that every film has its own charm and the audiences will see everything once it’s on screen, therefore, I will pay very close attention to the details regarding vision, setting and performance etc. to make it the best one.

Do you get involved in other aspects like editing, cinematography, sound?

Yes, I’m involved in other aspects of the production as well. Since my name will remain in the film and series as a Director forever, I have to make sure that every production process has been done perfectly.

Are you a strict director when it comes to actors?

Well, I would say that I’m more like a thoughtful thinker, but I’m actually not strict. Sometimes, strictness causes the performers (to feel) pressure, and pressure doesn’t make them perform well (except for some cases).

That’s why I don’t want to cause them more pressure, especially the young ones who have already put too much pressure on themselves. So I need to make them relax when we work together, then they can really concentrate on their performances.

Do you have filmmakers you admire and are role models for you?

A Tweet from Mr. Utain ( the author of My Ride) says that you wanted to know the actors auditioning about their view of LGBTQ. Why?

Actually, it’s quite a personal reason. For me, as a Director, I know why I want to do the Series about LGBTQ, so I would like to know the perspective of the performers regarding this issue and see how they’re going to express it to the audiences as well. Surely, there are a lot of Film and Series’ projects that open for casting calls, and the performers need to show their abilities in order to be chosen, so is mine.

However, I’m not only looking for the performers, but also the ones with the similar point of view about this project, just to make sure we’re on the same page.

If given the chance, will you do a drama series of 10 episodes or do a movie Why?

I started my career path in film industry and certainly I still want to make films. However, films come and end fast, and cannot be developed once it ends. Moreover, making feature films is quite challenging as Thai film industry is quite monopolized by big studios. Thus, if I have to choose for my survival, I would choose making series. LOL

How are independent film companies in Thailand compete with the big studios?

What can make us compete with the big studios is we make what we think the audiences and the market want to see, and of course, there are business issues involved. We just need to find out what content we should sell, which client we should work with. Though, our channels are less than the big studios, we still try our best to find a way to draw the audiences’ attention to our channel.

What are your views about the Thai film industry?

As I’ve mentioned that Thai film industry is quite monopolized by big studios. Not only the cinema system, but also the big studios that have a large market share and cause the small studios to almost have no space to express themselves.

However, there are still a group of people in Thai film industry trying to push short films and smaller films to happen. That’s why I think Thai films are great but not powerful enough to become film industry as small studios cannot compete with large studios fairly. I can only say that we have film studios in Thailand but we still cannot really call ourselves “Film industry”.

The PsychoMilk team thanks Dir. Nam for this interview opportunity and looks forward for the upcoming series, My Ride, I Love You.