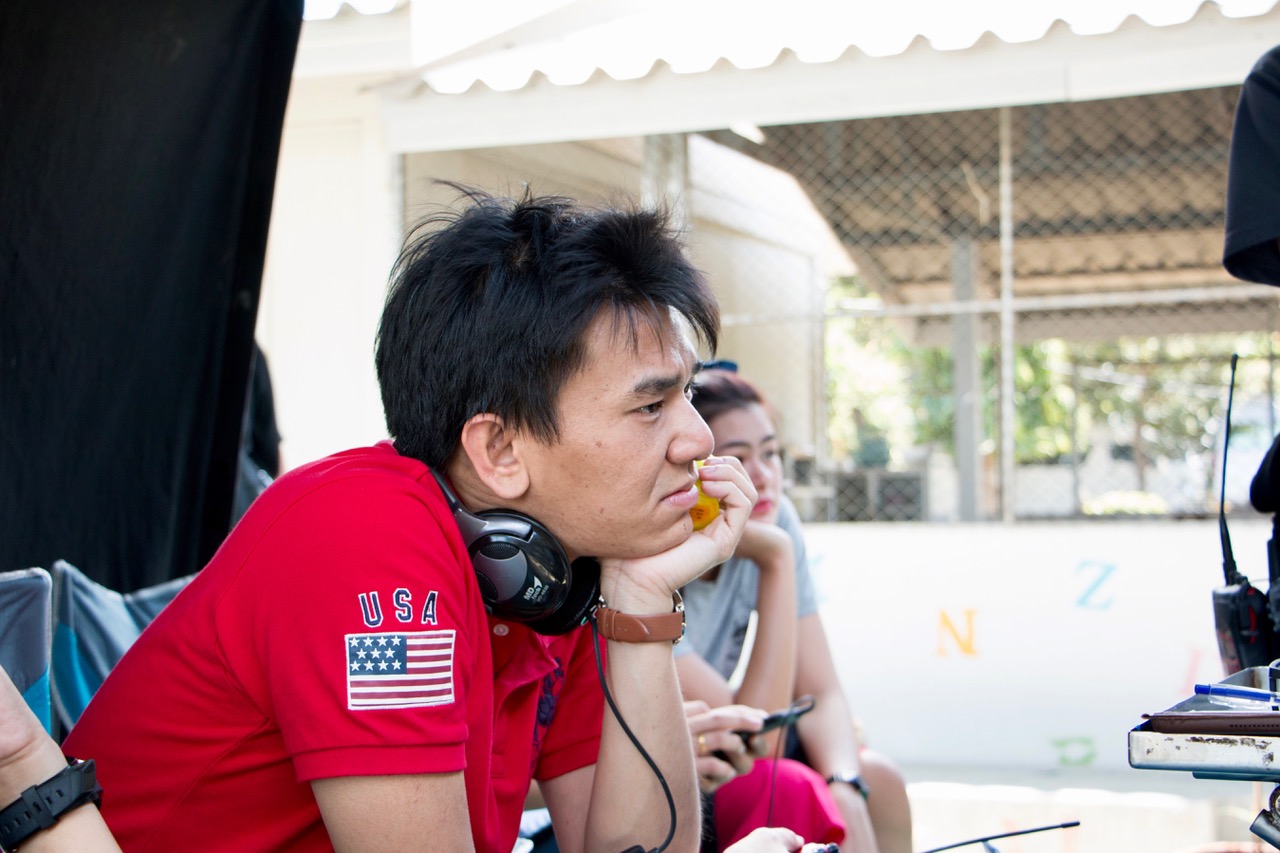 The BL universe has started to evolve. Like the frenzied craziness common with the rise of a popular niche, the Thai BL scene has become both popular and unfortunately, toxic. One personality who is the subject of admiration and denial is acclaimed filmmaker Aam Anusorn.

The Roze Filmdagen (meaning “Pink Film Days”) is the longest-running and largest film festival for LGBTQ films in the Netherlands. We started preparing our 23rd edition, which can be enjoyed from March 12 – 22, 2020.

So what do you do with such a personality when given the opportunity? You ask him hard questions. Why is that? To get exactly what we want and need these days – answers that are not sugar-coated to ongoing questions concerning acting, the BL industry in Thailand and much more!

Before the interview, he issued a warning (a reminder actually) to readers.

Before you read, these answers are only my perspective and you don’t have to believe me. That’s ok and don’t make it personal. You can think that these opinions come from one guy who doesn’t mean anything to your life and you don’t need to get upset. I love you all. Especially my fans!

As a student and a Thai, what were your choices in taking up a university course? Were you always interested in the arts and filmmaking? What was your childhood like?

We have many good film schools here in Thailand and I graduated from Bangkok University. However, my major wasn’t film directing, it was actually film business.

Anyway, I believe that everyone can be a storyteller and can become a director. In all honesty, I think I am a storyteller since I was a baby. I remember my Mom took me to see Jurassic Park and then I fell in love with it and I always believe that dinosaurs still roam the Earth. On my 13th birthday, I discovered there are no more dinosaurs and I was like ”wow, this is fucking cool that filmmakers had me believe that the dinosaur is real for 9 years!”

I had a hard time growing up, I got no friends because my dad is a policeman. He moves around every six months so I have to transfer schools all the time. Watching movies and identifying with certain characters make them my only friends. Equipped with only my imagination, I dreamed of traveling and of exploring the world to find out if a certain story is real or not. That was my hobby.

I am always happy that people love and accept my arts, it seems like they accept me because I put lots of myself into my arts. Sadly in real life, not many people accept me as the way I am because I talk too much and I never learn to shut up. One thing that surprises me is that being too honest is a bad thing, being too successful is a bad thing. But I am getting used to it and I’m trying my best not to pay too much attention.

Aside from the revelations above, there are 3 people who specifically ask this question. Tell us more about you?

I love telling people how I felt even if I can get in trouble for that but I never learn to shut up. When I am proud of myself, I just said out loud that I am proud to be me and people don’t like it. In my teenage years, I got to spend time in the USA as an exchange student. That was the best time of my life because I saw my country from the outside and I was like – “I’m wide awake” like Katy Perry song, you know what I mean, as people lie to me for my whole life that my country is the best in the world, but it was totally wrong. Every country has its “best thing” to represent, but there is no best country in the world.

I am an atheist but I respect religion, I just don’t believe in God. I believe in love and Britney Spears…

As an artist making a movie or drama series, do you consider the audience first or you create a film because that is how you feel. Do you follow certain criteria? Do you consider what the fans will say about your work?

To be honest, I am a selfish person. When I make art, I just keep it real and my work always is the place that I release my emotions or expose what I have been thinking and criticize society. I don’t think of the audiences but I do believe and I always believe that there is someone out there who will like my work.

I don’t follow the trends (except the clients want to, ha!), but I will like specific thing and I stick with that thing for a while.

As a recognized and respected Thai filmmaker around the world, do you consider your work more popular outside Thailand? Do you think the local Thai industry lacks appreciation of filmmakers who have done great outside your country?

Yes, I think my work is more popular outside Thailand and I don’t know why is that and I think if you are so young and you have your own series, your own movies, your own company, people with hate you for that! Hahaha, especially people in my industry. I ain’t no good with playing the business game so I don’t think people in the same industry appreciate what I have done but that’s OK.

I know it’s a competition but I like to support people in my industry a lot! I’m not trying to be nice but I just like to see other people become successful too!

In your opinion, do you think Thai BL or Y generation of stories can also represent gay movies?

I grew up in the Y generation and my generation is more likely living in a dream.

BL Thai drama is just too much. It’s like you are entering the Harry Potter world. It never really exists in the real world though there is nothing wrong with that. However, I would like to say we represent Thai BL in the wrong way. We preserve and serve lies to fans and the fans seem to enjoy that sort of BL world.

Specifically, little is explored about our current society and state of democracy. LBTQC rights are still not properly promulgated in the country.

What is the reason why you are no longer part of 2Moons3? Is it about creative differences or something else?

I believe it’s all about jealousy. But they will never gonna accept the fact that they are jealous of me. They will create and say whatever reasons to make me look bad.

To those who have seen 2Moons2, I believe I have done nothing wrong. I work hard – day and night. I promoted the series a lot and I wanted to make the subtitles from the beginning. English subs are important yet they want this to be a job for the fans. I was like Hell, no! Why should fans have to wait day and night to watch the series with subtitles? It’s not their job! So I have to do it and the funny thing is that I knew my grammar sucks and they tried to report this as a shortcoming.

One more thing, I think I talk too much and I was being too friendly with the boys, that’s why they don’t like it. They always told me not to be too close with the boys because the fans will get upset. I don’t know why the fans would get upset about this or not but I believe that if I’m being friends with these boys, it will still be ok. Am I right?

Anyway, that’s only my side and I will stick with what I believe. I still don’t know exactly why they kick me out but I will always respect them as the people who hired me for the job.

[ Publisher note: We shall provide further insights into this specific issue.]

In your opinion, should actor agents or managers have an influence on the way the actors behave with the public? Should they create a fantasy character of the actors? Or it is better to let the actors do their thing?

I think actors need to get the right payment (talent fees). Some series – high budget series – the actors still got very low payment. I mean, like lower than the usual (except for the independent films that only have a low budget, which is expected from me because we agree in the first place that we’re poor! Ha!).

There is absolutely a need for a more balanced and equitable system for the agents and the actors.

That would help our industry – both commercial series and independent projects.

The sad part is when the agent wants to play the game to follow the fans’ demand and fantasy and force some actors to act like the way they are in the series. Some agents force the actors not to tell the truth, keep it a secret about their personal lives, and they can’t post anything on social media except when the agents give them permission.

When actors are off-stage or when they want to express their feelings about something – like politics or share their personal lives, I think the fans should appreciate and accept the way the actors are (in real life) and the agents/managers should stop making money from it. You can make money by securing them the right job and get a percentage but to control their personal life for 3 years (based on the contract) – are the fans happy to see the actors you love can’t even be himself? They got lock up like they’re in jail and it’s painful for me to know that.

Are Thai BL actors properly compensated? Is it true that actor-agent share money on a 70%-30% basis or are agents getting more? Do these actors have any protection in case the agents did something illegal?

It’s not always true, there’s a lot of “dark sides” about this and I think you guys already know about this, c’mon! Don’t pretend that you don’t know the situation! Also, I did reply quite specific to that from the previous question.