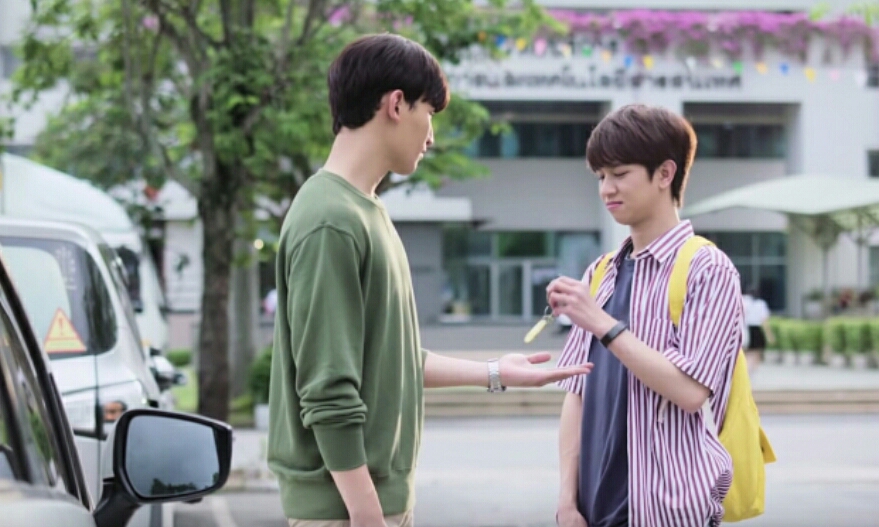 Until We Meet Again – Episode 11 [Review]

Another emotional powerhouse, this episode belongs to the leads. Nine, Earth, Ohm, and Fluke show us an intimate view of relationships: one starting to deteriorate, and another building at the same time. In the first scene, Korn is late again, feeling what appears to be stress developing in his relationship with Intouch.

Even around the holiday season, with all its accouterments, there’s a down feeling between the two of them. Of course, Intouch tries to be nonchalant about Korn being late for a date at the Christmas lights, but you can feel the hurt. I think the scene comes with a sense of foreboding of what’s to come. Korn is reticent and Intouch is reassuring.

Exams are over for Manaow, Team, and Pharm. Team is especially tired because of his bouts with insomnia. Leaving the classroom, they encounter Dean, who’s waiting to surprise Pharm with the gift he promised after Pharm got through the exam. Dean even comes prepared with a change of clothes for Pharm and causes Pharm unbounded consternation as to Dean’s resourcefulness. After Dean dismisses Team to go rest (and take a protesting Manaow with him). Pharm starts into a delightful question and (Dean’s) non-answers session. It’s as if someone you cared about, who knows some things about you, suddenly has a detail-filled dossier on your entire life. Have no fear, Pharm isn’t serious with his indignation, but he is curious how Dean now knows of all these minutiae of Pharm’s life. They banter playfully back and forth for the next 5 minutes, all this while getting to and traveling on the road. We, the audience have the absolute joy of watching the two actors, whose chemistry is so good between them, have fun with wordplay with Dean taking just the smallest advantage of his younger love in “negotiations”.

After the break, we are treated to a Mise-en-Scene of Dean’s and Pharm’s trip to the Christmas lights, complete with PDA and positive emotional vibes. The increasing depth of their relationship is even more apparent when Dean tells Pharm that Pharm is going to “meet the parents”. Win and Team, who also happen to be at the Christmas lights at the same time, is where Win manages to wrestle a bit of PDA out of Team using broccoli substituting in a “seasonal” role.

What follows is something I consider one of the most important turn of events so far in Pharm’s life. Pharm is on the phone with his Mom, discussing things and events of the family, even touching on her new “son-in-law”, which prompts a continuation of Pharm’s frustration of not being able to get straight answers about Dean’s “resourcefulness”. During the discussion of reassurance, his Mom says to Pharm “Your name, Pharm, means strength, (and) You have that strength in you.” She goes on “My son, you can stop being scared”.

We flashback again to Korn and In. They are just passing the time being together, Korn is reading a book, and In is playing with some Red Thread. They get into an animated discussion about the validity of some of the stories and myths that go along with the legend. Korn dismisses the stories and tells In they’ll always be together, with In smiling back at him.

In an antithesis of the previous scene, we join back with Korn and Intouch, minutes after the encounter with In’s father at the restaurant, celebrating Intouch’s birthday. However, the feeling of celebration has been obliterated; it is raining, and the two of them are walking slowly, with In crying mournfully. What follows is a long, painful, and emotionally exhausting exposition of the truth: their relationship was doomed from the start. In Pharm’s bedroom, with Pharm asleep in bed, he’s been a participant in this same emotional nightmare.

Fluke Natouch Siripongthon’s strengths as an actor here continue to prove to us that he’s the best “Pharm” we could ask for in this role. His performance, complete with convulsions, moaning, and effectively relaying the feelings of what his character’s experiencing is again very raw, tender, and hard to watch. However, I feel there’s a silver lining here, along with his Mom’s talk, that will show us later that Pharm has a new attitude on his life.

It’s swimming competition day, and Manaow, Del, and a seemingly listless Pharm are checking out the schedule. Manaow and Del both express concerns, and naturally Pharm says “I’m fine”. Dean, Win, and Team saunter up, and Pharm walks right up to Dean with a big smile on his face, “P’Dean!” By instinct, Dean knows something is up and reaches to Pharm’s face with a concerned and loving touch, and Pharm firmly tells Dean “You have to concentrate on your competition, understand?” That’s it – no more discussion. Of course, it doesn’t end there, with continuing, affectionate talk about “rewards”. By this time, and with all the time and feelings we have invested in this series, you have to know that Dean wins his match – there could be no other outcome. After the break, we’re privy to a rather interesting event that was previewed in UWMA teasers and trailers way before now – a boyfriend for Manaow. This time, we see their meeting each other, and I’m shocked at how good-looking the kid is without the glasses we’ve seen him wearing before.

We cut to Pharm’s condo, where he’s viewing personal photos, he and Dean took at the Christmas lights. There’s a knock at the door, and it’s Dean bearing gifts – he’s brought lunch. In the final eight minutes of this episode, we get to watch two people who love each other express affection, teasing, physical intimacy, and living a full life of being boyfriends. There is a very emotional ending, one that makes complete sense, given the circumstances, with Ohm and Fluke playing off of each other beautifully. We’ve watched Fluke have his character Pharm express tears in all forms, but this will be the first time we see Fluke let Pharm lose it completely. I have no idea what this talented young man pulls from his life experiences to achieve this state of emotion for his character, but I pray it’s not something Fluke experiences often. Both his and Ohm’s performances reside completely within the lives of the characters they play.

I don’t want to give away any more of it, but know that Pharm believes that with Dean by his side, “there is nothing to be afraid of”, and what happens is a heartwarming completion to this episode with a certain bit of wariness as to what comes next, especially for Pharm. Next week promises to be another emotional blockbuster.