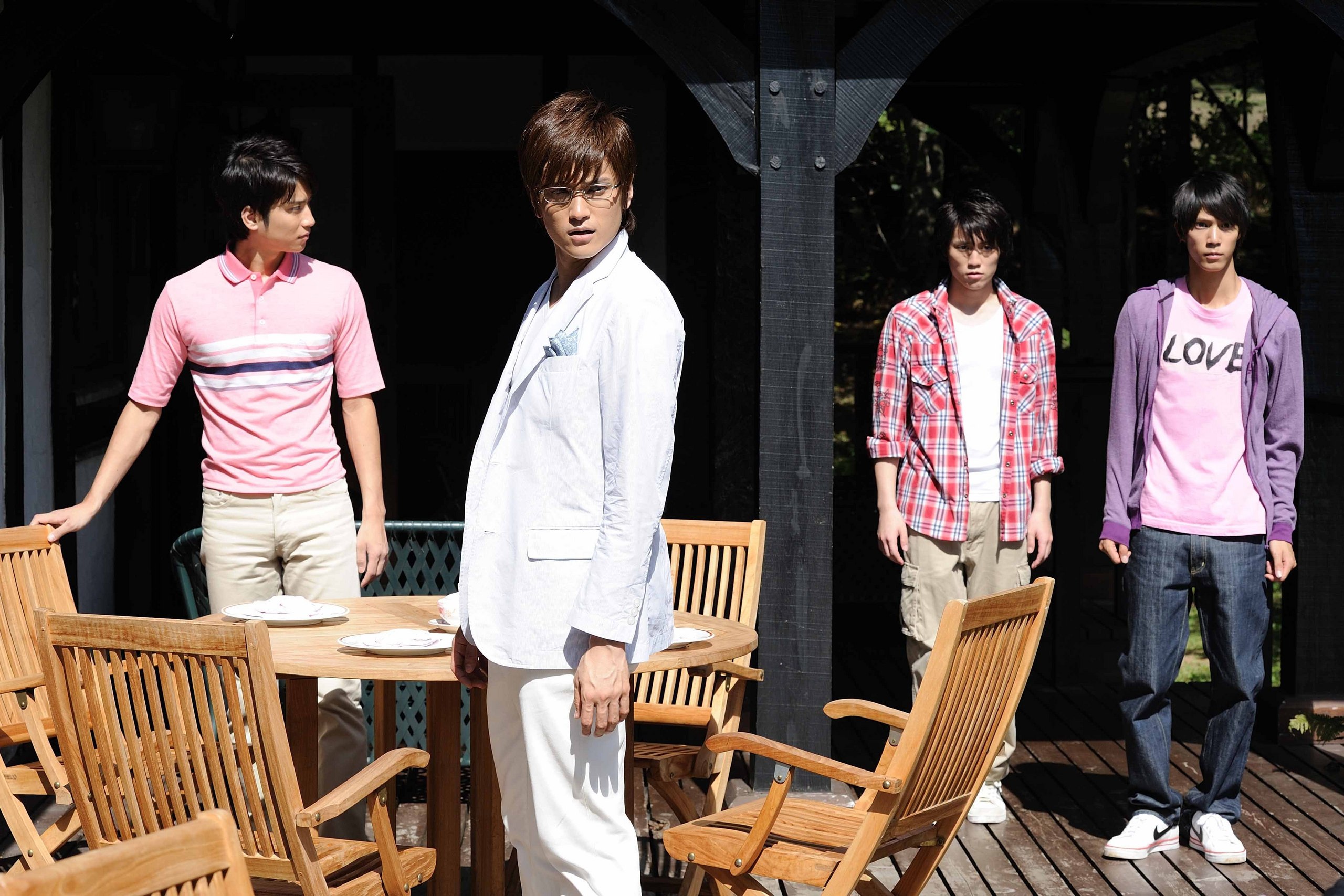 Directed by Takeshi Yokoi. This is the fourth installment of the Takumi-kun series. The movie begins as Takumi and his friend, Shingyouji decorate a room for the upcoming Tanabata Day on July 7. This is a Japanese star festival where people celebrate it by writing their wishes and hopes on pieces of paper. This time Takumi and Gii take a backseat in Pure as it explores the romance between Misu Arata and Shingyouji Kanemitsu and how it all began. Another couple that was previously introduced in the first movie is also included here, Izumi Takabayashi and Michio Yoshitaka. The movie explores how destiny, conflicts, and love affects their lives. Pure is mostly told from Shingyouji’s perspective.

Some Takumi-kun fans have expressed disappointment that Takumi (Hamao Kyosuke) and Gii (Daisuke Watanabe) did not get enough screen time together. I think they are missing the point that this movie is not about them rather it’s about Misu and Shingyouji thus explains why they are cast as supporting roles including Akaike (Yukihiro Takiguchi) and Yusuke Hirose (Sagara Takahiro).

One of the things I appreciate about the movie adaptation of the Takumi-kun series, in general, is that regardless as to which part of the series you watch for the first time, you can still appreciate one movie for itself even if you have no prior knowledge that this was inspired from a manga series or whether there were other movies prior to the one you are currently watching. But after watching one film, it encourages you to seek out more information about the movie. Although there has been a consistent shuffling of actors and characters, one thing that remains constant is that you can be assured that the actor you see playing the role is designed specifically to fit the storytelling and this movie proves that.

The role of Shingyouji Kanemitsu is played by Naitou Taiki, a stage veteran, and former child actor. Pure is his first movie role and yet he is already cast as the main character. As soon as I saw him as the new Shingyouji, I was completely smitten by him. I knew right there and then I was going to immensely enjoy this movie. He gives a much more different interpretation of the character compared to Bishin Kawasumi (Bibou no Detail). It is like getting to know Shingyouji “again” for the first time and understanding who he really is. His performance can be described as natural and sensitive with that nice balance of intensity and subtlety making us more convinced that not only he could portray the role effectively but that he has firmly established the character as his own.

Baba Ryoma reprises his role as Misu Arata making him the second actor in the Takumi-kun series who was not shuffled into playing someone else in the story based on the fact that he is just that great of an actor. The chemistry between him and Taiki fires up on-screen leaving the audience salivating for more. They compliment each other so well and convincingly despite the fact that this is the first time they were cast in a movie together as a couple. You watch them interact and you can feel and see how everything just settles into place with them. What I love about Baba’s acting is that he does not overthink or find the need to overcompensate anything. Watching them together left me completely mesmerized and convinced that no one else can justify the roles they played better than they can. They work so well together proving yet another fact that they indeed have what it takes to carry a movie. I must emphasize that Baba and Taiki did one of the hottest and most memorable love scenes ever captured on film.

Yusuke Hirose plays senpai Sagara Takahiro. Although his character seems to be an unsuspecting wedge between Misu and Shingyouji, one can’t help but realize that he is actually quite a good-natured and generous fellow. It is difficult not to like him. He is handsome yet does not radiate an intimidating presence on screen.

Pure reintroduces the couple Izumi Takabayashi played by Ryo Mitsuya and Michio Yoshizawa played by Yutaka Kobayashi. We find out more about them and their relationship. Although their story may seem like a side item in Pure, it somehow finds its way to bridge itself with the main couple, Misu and Shingyouji as well as Takumi and Gii.

Although they look good together as a couple on screen, they do not generate enough chemistry. There is a lot of stiffness between them that can be observed. Some fans have expressed mixed views with regards to having their story inserted in Pure. From my perspective, Takabayashi and Yoshizawa serve as somewhat of a reflection of the conflict that Misu and Shingyouji are facing. However, it would have been much better if these two had their love story told separately.

Ryo Mitsuya (Takabayashi) needs a bit more subtlety in his acting. He tends to overact in certain scenes where it is not needed and this is not because that is what the character required but rather his acting is still inconsistent. He would be so convincing in a tender scene with Yutaka and then in the scene with Baba, he delivers his lines in an over projected voice making him sound forced and unnatural. However, in my opinion, he did a much better job than Yasuka Saito from part one.

Yutaka Kobayashi (Yoshizawa) proves to be a much better choice compared to the original actor who portrayed the role. But like his co-star, he exhibits awkwardness and nervousness throughout his performance. The way he delivers his lines is static and still lacks a degree of energy. This is not to say that both actors were bad, it simply means there is still a lot of room for improvement.

If there is such a thing as a major supporting role then this would best describe Daisuke Watanabe (Gii) who almost singlehandedly managed to interconnect the conflicts the characters were facing and see them through the end. This is the side of Gii that I especially enjoy watching is when he tackles the role of big brother. Watanabe (Gii) remained consistently cool, unbiased yet sympathetic. He was calm, confident and in control which is expected of his character.

Hamao Kyosuke (Takumi) appeared only in the beginning and almost towards the end of the movie but he makes the most of his limited screen time as Shingyouji’s support and Gii’s partner. His performance does not go more or any less than what is expected of him. The same thing can be very much said about Yukihiro Takiguchi (Akaike) whose main concern has and always been for the sake of his best friend, Gii. He remains stable and unflappable.

I must admit that this was the movie that I find it difficult to contain myself while watching because it had the elements of what I was looking for in a BL movie particularly on the story about Misu and Shingyouji. After Bibou no Detail, my expectations for the Takumi-kun series was higher than ever because the third movie impressed me so much and definitely on my list of favorites. But what I have seen in Pure just blew my mind. The story of Misu and Shingyouji was tremendously inspiring for me. I could watch this film again and again and never tire of it. It’s simply unforgettable. The thing I love the most about their relationship is that it keeps you guessing. I like the fact that even though you think you’ve known them enough, you are still thrown in for a surprise. It is that kind of mystery that makes things more interesting and leaves you wanting.