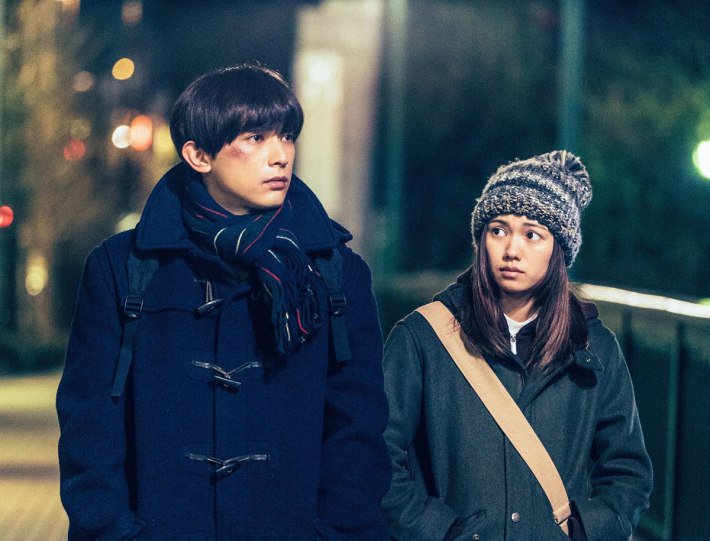 This movie has a gay guy as the main character and is played by one of Japan’s rising stars, Ryo Yoshizawa.

What its all about:

Haruna Wakakusa and Yamada become friends after she saves him several times from her boyfriend’s constant bullying. Through him she gets to know Kozue Yoshikawa, a fellow student who also models professionally. The three emotionally stunted teens’ lives briefly yet intensely intertwine for one semester before splintering from the aftereffects of one disastrous night. For both Wakakusa and Yamada, their emotional awakening fosters an unlikely friendship between the two battered souls. [ source ]

Fumi Nikaido and the young actor were in Wolf Girl and Black Prince, in a relationship of unrequited love. Nikaido’s character having fallen head over heels with Yamazaki Kento’s Kyouya. But Yoshizawa’s few scenes were heartfelt. He can play the underdog and a bullied boy with a lot of conviction.

Kyoko Okazaki a Japanese manga artist whose manga are popular for their unorthodox style and controversial topics, for instance, sex, sadomasochism, drugs, homosexuality, rape, murder and prostitution. The Tokyo-born Okazaki often focuses on urban Japanese life in the capital from the 1980s and 1990s. Her writings are often studded with modern jargon. Okazaki’s manga is not typical, in that while it is a part of the shōjo manga demographic, her works are not conservative enough to fit the typical shōjo manga demographic completely. Okazaki, along with manga artist, Shungicu Uchida, are two examples of today’s leading female manga artists, who contributed to the rise of a new style of manga, known as “gyaru manga”. Gyaru literally translates to gal, and this genre of manga is aimed towards those who are interested in a love story about a girl but are also interested in topics like sex and drugs.