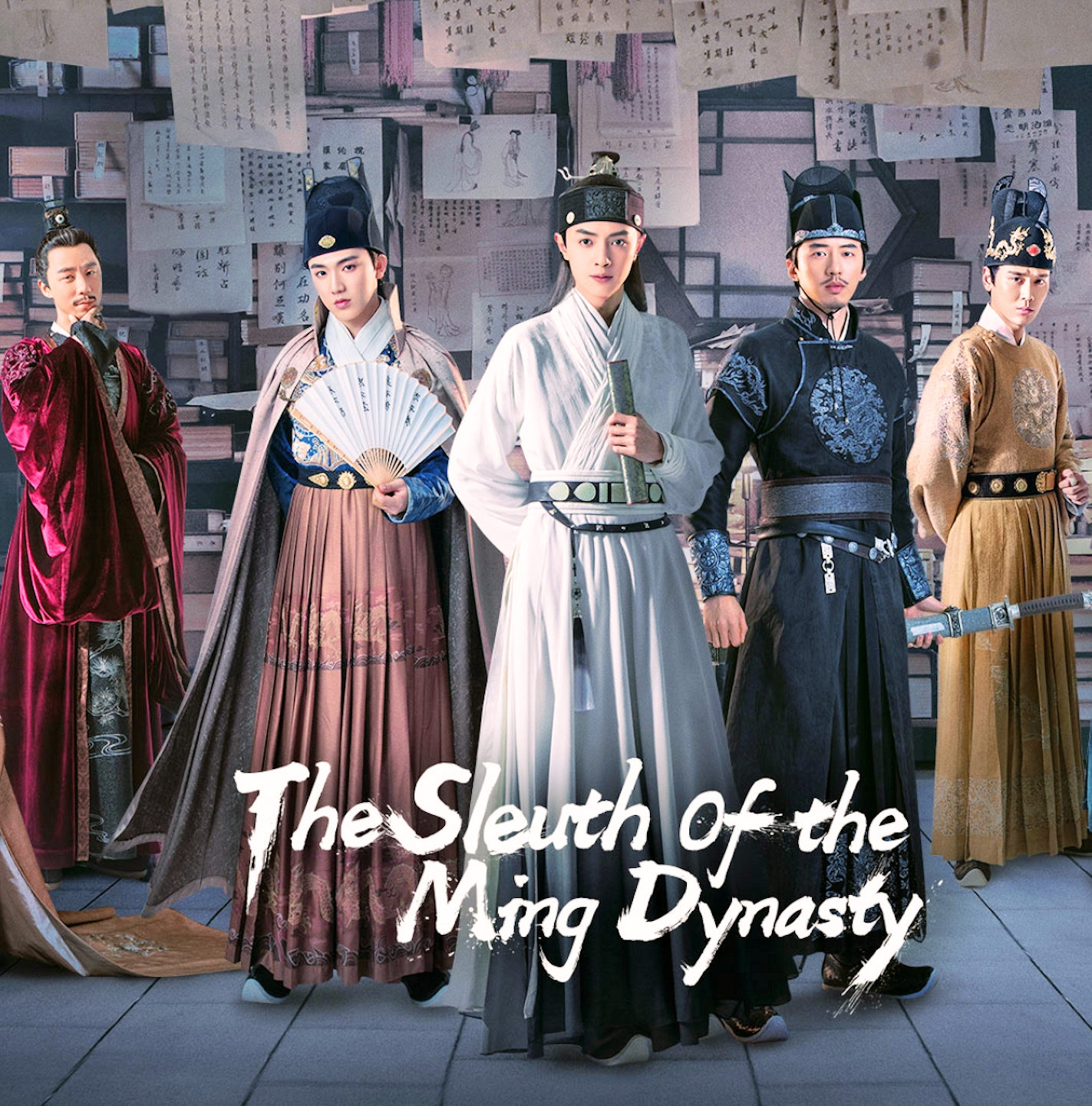 The Sleuth of Ming Dynasty is racking up ratings because of the elements of mystery and thrills. That, coupled with the main lead’s excellent chemistry, is keeping the audience on edge and highly entertained. Let’s review what is happening in the current episodes.

Storyline
After solving the case involving the Marquis’s son, and the Crown Prince’s missing companion, Tang Fan faces a significant dilemma when his landlady not only evicts him without notice but also sells Dong, whom Tang is quite fond of, to a brothel. Seeing Fan in dismay, Sui Zhou rushes to the rescue and brings both Fan and Dong to stay at his home. A big happy family established.

Problems ensue when Sui Zhou is sent to Jian to investigate a very large number of deaths occurring in the jail, but gets imprisoned himself instead. Tang Fan immediately rushes to Sui’s side on deciphering his secret message for help. With Wang Zhi’s help, they finally bring the ruthless court officials to justice and return to the capital.

However, life is never that simple when you are friends with a cunning and ruthless Commander Wang. The trio gets together to solve the case of children being kidnapped, and Wang uses Dong as bait. Tang is enraged, but again Sui saves the day and rescues Dong from the kidnappers.

This case, followed by a series of murders involving foreign women and again, Fan and Sui are on the case. However, in the middle of this case, Tang’s new “frenemy” Dola is herself kidnapped by the serial killer. Tang keeps the audience riveted with the techniques he uses to fight the killer. However, despite warnings from Wang, Tang brings the killer to justice. Unfortunately, the killer also happens to be a member of the Royal Family.

The Emperor is enraged and banishes Tang to Tongzhou, the same town where his elder sister resides. Tang gets a first-hand account of the miserable life his sister lives and decides to help her. With help from Dong, Dora, and her henchman WuYun, Fan teaches a lesson to his brother-in-law and gets a mutual divorce, his nephew, as well as his sister’s dowry back.

At the same time, Wang Zhi is embroiled in a controversy surrounding the horrific massacre of the entire Yu family. Unscrupulous individuals from the Emperor’s Court attempt to frame Wang, and he is jailed. However, Sui Zhou and Fan investigate the matter and are able to clear his name. Enraged at Zhou’s behavior, his Senior Commander Wan instead frames Zhou for owning banned books, and Sui is suspended from the Imperial Guard.

Zhi, on the other hand, convinces the enraged Emperor to give Tang Fan another chance. There is conspiracy happening in Yunhe, the source of the Ming Dynasty’s mined silver ingots. Tang Fan and family, along with Dola and her henchmen, arrive in Yunhe.

The main leads Tang Fan and Sui Zhou, have now moved to what appears to be a “married phase,” where they live together and bicker just about everything. However, they are adorable. Tang is sweet, caring, oblivious at times, and rest of the time possessive about his Sui Zhou. On the other hand, Sui Zhou is very protective of Fan and Dong. He has been living alone for too long, and Fan, along with Dong, completes his family picture.

We see how worried Tang is when Sui is captured and detained. Tang Fan bargains with his ‘frenemy’ Dola for horses, and rushes to Liandong to ask Wang Zhi for his help. He can’t sleep because he is worried about Sui Zhou and even crosses a sea so that he can help rescue his man in Jian. These actions are that of true love but with the more subtle nuances of a “bromance” per Chinese censorship.

When the Empress Dowager Zhou arranges for Sui’s marriage to the Yu family daughter, Tang Fan explicitly forbids Zhou from getting married to her. Didn’t I say that Tang Fan is possessive?

Wang Zhi is a formidable character, and very unique. I haven’t seen such a great role in the history of Asian dramas. Here, played by Liu Yao Yuan, he is crafty, cunning, yet dignified. He is cruel with handing out punishments but can also be a true friend. He is ruthless to everyone who could be a threat to the Empire, yet he is extremely caring towards the Noble Consort and respectful of the Emperor. The character Wang Zhi is multi-faceted with so many layers and dimensions that he is often misunderstood. However, that doesn’t stop him from performing his duties to the best of his abilities.

Although the audiences love the #SuiTang pairing, there are a few that secretly “ship” Tang with Zhi, because for some inexplicable reason, Tang brings out Zhi’s protective side. You can see this, as evident from the scene where Tang Fan arrives in Liandong to seek Zhi’s help to save Zhou. Wang Zhi helps him down from his horse and says, “You are the second person that I helped to get down from a horse in my life.” When Fan asks who was the first, Zhi replies, “His Majesty.” Many point out that this scene shows how Wang Zhi gives the same importance to Tang Fan.

Wang Zhi can be manipulative at his best, and there are many instances when you might not understand what he is doing. But rest assured, because he is a Mastermind. For example, he refused to follow Fan to the Jian court, but later, arrives in full regalia and saves the day by proving the Court Magistrate guilty of treason. When it comes to Fan, Zhi always makes things possible by hook or by crook.

In the serial killer incident, Zhi refuses to help Sui Zhou when Fan goes missing. But despite that, he rushes to the Royal Duke’s mansion immediately with his bodyguard to rescue Fan. Since the case involves a member of the Royal Family, Zhi takes steps to protect the Dynasty’s reputation. Even after the Emperor gives the Duke a pardon, Fan still exposes this serial killer in his Court, and the Duke commits suicide. This causes Zhi to worry about Fan because of his insolence. These two have an adorable friendship and camaraderie that is light-hearted.

The Chemistry and Friendship Between The Leads Off-screen

It helps that both the main leads Darren Chen and Fu Meng Po are good friends off-screen as well. In a recent interview, when asked why Fan and Zhou bicker so much, Darren replied that he feels Fan can be himself with Sui because he trusts Zhou will always protect him. He thinks that whatever Sui does for Fan is quite heartwarming, and they have enviable chemistry.

When asked if they bicker in real life too, Fu Meng Po said they don’t since he finds Darren very cute. He’s accepted that Darren uses his poster boy dimples, shows his white teeth, and that there is no way he can resist Darren since he is gorgeous. When asked to comment on Darren’s figure, Meng Po said that Darren is too thin but since his face his small, that suits him well, which is evident when Meng Po replied with a ❤ for this picture.

When Fu Meng Po invites him over for dinner, Darren is adorably shy even though Meng Po accepts that the food he cooks would be bland. Darren just wants to learn cooking from Meng Po. Darren is also quite impressed by Fu Meng Po’s physique and said that he was pleasantly surprised when he saw Fu Meng Po shirtless for the first time.

Darren talks about Fu Meng Po as a very charismatic, and that it’s fun to spend time with him. He goes on about how they both went for an outing to the mountains, but since it rained, they strolled by the seaside instesd. Fu MengPo had his Jeep; he put up a tent, two chairs, and brought his family dog. They just sat there, chatting, gazing at the sea, enjoying the breeze, when Darren fell asleep.
Darren continues with how, when he woke up, they just kept chatting, and Fu Meng Po didn’t ask him even once why Darren fell asleep suddenly. Everything was completely natural between them. That was what made Darren more inquisitive about Fu Meng Po.

Darren and Liu Yao Yuan are also good friends off-screen. While talking about the particular scene where both of them are attacked in the carriage, and they had to crawl out, Darren says that he couldn’t control his laughter. Wang Zhi is such a badass character that seeing Yuan have many retakes made the whole scene quite hilarious.

Yuan further explains how the scene where his evil twin whips Sui Zhou was the most difficult because he had to take precautions to hit the ground and not accidentally hit Fu Meng Po. When the scene ended, they both laughed about it.

When asked if Sui Zhou was the most awful, Yuan demurred, and according to him, Fan is the most horrible. Because he is weak, he keeps getting threatened or kidnapped, and it’s Sui Zhou or Wang Zhi’s job to rescue him. Tang Fan is very needy in that way.

In the interview, when Meng Po and Yao Yuan were asked why Sui told Tang to stab Wang Zhi, Meng Po replies that it was an automatic move to calm Fan down. The provocation would let him cool down and take stock of the situation. Talking about the next scene where Sui and Tang have a charged moment when Zhou tries to calm an enraged Fan, Meng Po explains that the moment was emotional and more serious than any other that they had done before.

When asked if Yuan wanted to do a similar kabedon (refers to the action of slapping a wall fiercely, which produces the sound “don”, indication strong emotion) scene, he ruled out Darren since Darren is taller than Yuan.  He then choose to do the kabedon scene with Fu Meng Po instead. See, this is the type of charm that Darren was referring to. Fu Keng Po has got everyone swooning over him.

What happens when our resident detective group arrives in Yunhe, will they be able to uncover the truth behind the conspiracy? Watch this space for the review of the next episodes.