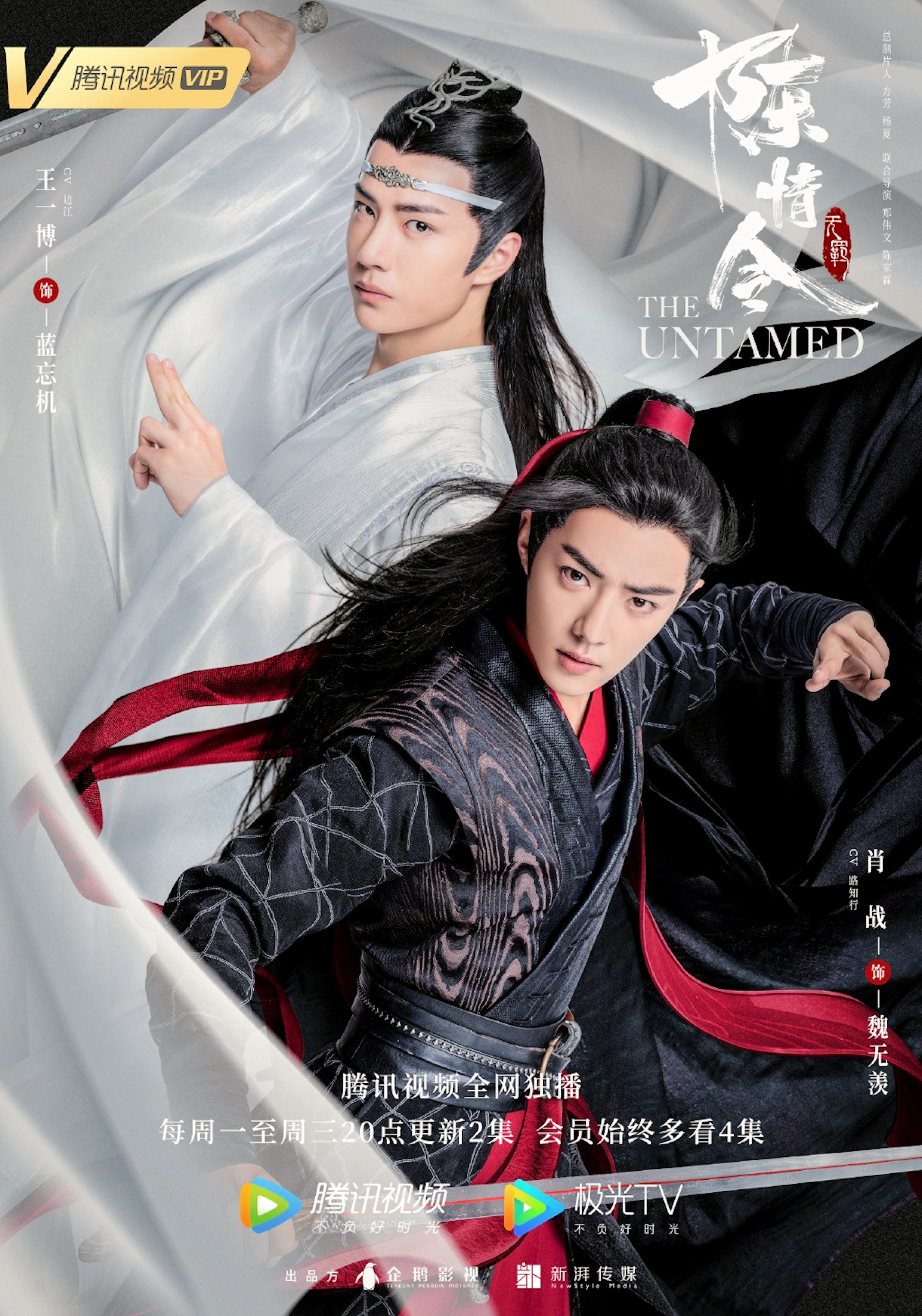 Some stories become true fan legends and are revered for centuries. The Untamed is one such epic series. With 50 episodes, followed up by a 20 episode Special Edition, it’s based on the fantasy web novel Mo Dao Zu Shi (translated to “Grandmaster of Demonic Cultivation”) written by Mo Xiang Tong Xiu, the story was a popular web-animation series before being remade into a live-action drama.

The Untamed follows the journey of Wei Wuxian (Xiao Zhan) and Lan Wangji (Wang Yibo) as “cultivators,” with supernatural powers from different worlds. They are forced to work together to fight villains, but in due course, grow close and become confidants to each other over 16 years – a Journey of Lifetime.

Starring two of the most popular Boy Band Icons of all times, Wang Yibo (王一博) of Korean-Chinese group UNIQ and Xiao Zhan (肖战) of Chinese band X NINE, The Untamed was plagued with controversies. In Mo Dao Zu Shi, the relationship between the main leads is explicitly gay. As such, fans of the novel were afraid that following Chinese censorship restrictions, the adaptation might reduce female fan interest. However, as news of the main leads Yibo and Zhan’s formidable chemistry spread, the show gained popularity.

Wei Wuxian (WWX) is a disciple of the Yunmeng Jiang sect and is revered as the Yiling Patriarch. After his parent’s death, he was raised by Jiang Fengmian like his own child, along with his own kids Jiang Yanli and Jiang Cheng.

Lan Wangji (LWJ) is an essential character in the book Lord Hanguang of the GusuLan sect. He wields a sword and zither. Wangji’s paternal uncle, Lan Qiren, is the respected teacher of the sect while his brother, Lan Xichen, is the leader. Being bought up in an austere environment, LWJ is coldhearted and never betrays his emotions. Lan Sizhui is LWJ’s adoptive son and is a capable disciple like his father.

Jin Guangshan is the womanizing leader of the Jin sect. Jin Zixuan is his favorite son and heir, who is betrothed to Yanli. Guangshan’s illegitimate children include the villainous mastermind Jin Guangyao and Mo Xuanyu.

Nie Mingjue is the leader of the Nie sect. The sect’s leaders are said to be cursed with a high temperament. As for keeping with his sect’s rules, Mingjue wields a blade and is a fierce cultivator. Huaisang is Mingjue’s younger half-brother and has no real talent in cultivation, who likes to while away his time. However, he grows up to be a formidable force, after Mingjue’s gruesome death.

Wen’s are the villains of this story, but they are a divided sect. Wen Ruohan is the leader of the Wen sect. Ruohan and his sons are very ambitious and want to accumulate Yin metal pieces. The only hopeful characters in this sect are the physician, Wen Qing, and his brother Wen Ning, who later becomes WWX’s most significant support.

Other essential characters involved are Xiao Xingchen and Song Lan, who are high-level cultivators, excellent swordsman, and righteous. Xue Yang works for Ruohan to gather all the Yin metal pieces and later collaborates with Guangyao.

Storyline
The Untamed follows WWX’s journey as he is resurrected and comes to terms with what happened in his life, 16 years ago.

We are introduced to the characters, and the story begins when disciples from all sects assemble at Gusu Sect Cloud Recesses. Ruohan had been trying to join the four pieces of destructive Yin Metal to increase his cultivation levels. In the ongoing conflict, WWX and LWJ team up to figure out the reasons for the mysterious happenings plaguing the various sects and, in due course, fall for each other.

In the subsequent war with the Wen clan, WWX’s adoptive parents are killed, and Jiang Cheng’s loses his golden core. WWX, unknown to Cheng, donates his core to his brother. As a result, he is unable to defend himself when thrown into Burial Mounds by the Wen clan. However, WWX absorbs negative energy, forges Tiger Stygian Seal, learns to control corpses through his flute. With the help of the Seal, he defeats the Wen clan.

However, unfortunate events recur. Finally, WWX kills himself by jumping off the cliff when the dark spirits he called forward unknowingly kill Yanli and her husband. LWJ tries to save him, but Jiang Cheng pushes him off, and thus WWX is declared dead.

Present
Sixteen years later, when WWX resurrects and returns, yet again, he is swamped by mysterious happenings. With LWJ’S help, he starts to uncover the mystery behind his sister Yanli and her husband’s death. He finally discovers everything that happened sixteen years ago and now has been cleverly plotted by Jin Guangyao.

Guangyao knew that Jin Jixun would be trying to ambush WWX when he comes to meet his sister and newborn nephew. He not only purposely sent Jin Jixuan there to stop the fight, but also interfered with WWX’s flute tune which made Wen Ning berserk and made him kill Jixuan.

Similarly, when Wen Ying and Wen Ning surrendered to save WWX and were presumed dead, WWX declared war on all the sects. Feeling angry, he summoned dark spirits, but they were manipulated by Guangyao, and in the crossfire, Yanli died.

He was also the mastermind behind Nie Mingjue’s death. Guangyao slowly poisoned his mind with dark tunes and drove him mad. Finally, he cut off Mingjue’s head, as Mingjue was growing suspicious of him. However, the entire truth was uncovered by the timid Nie Huaisang, who keeps dropping hints to LWJ and WWX, who discovers the truth behind Guangyao’s sudden accession to the Jin Sect Throne. Finally, Guangyao is killed by Lan Xichen when Nie Huaisang tricks Xichen into stabbing him.